Enjoyed the article. I’m a happy owner of an older 45-70 Marlin Guide Gun, ported, on which my gunsmith installed ghost-ring peep sights. Sighted it in at 100 yards with 300-grain bullets, and I practice with lead and 36 grains of 4198 powder. Hornady’s 325-grain killer round is amazing and kills on both ends, but nothing stands up to it. What was most interesting to me was aiming at the very top of a 12-inch steel plate at 200 yards will make a nice low-center hit with the Hornady and the lead-bullet rounds. Love that Marlin rifle a bunch. Thanks for the magazine! — Gerald

Hey Gerald: It is our pleasure to deliver Gun Tests every month.  Thank you for reading. Yeah, that Marlin Guide Gun is an awfully good rifle, and has been for a long time. Joe Woolley wrote about it as recently as the August 2020 issue, saying, “We shot two groups on these rifles with open sights. Flat-black iron sights and what we are going to call “experienced” eyes aren’t always the best match — this rifle was no different. The groups for the Marlin measured about 4.5 inches at 100 yards, about the proverbial minute of deer. Then we mounted the Sightmark scope, and things changed for the better. Frankly, we were astounded. The rifle ate everything we fed it, and the cumulative average for all groups fired with factory ammo was 1.25 inches. Its best group was a mere 0.58 inches, and we hit the sub-inch goal a number of times.

“Our Team Said: We think this rifle would be an excellent choice for an all-around rifle out to several hundred yards if it were mated with a good 1-4x or 1-6×24 scope with ‘tick marks’ on the reticle to aid in instant range adjustment.” We also named it a Best Buy and Our Pick, a very rare occurrence.

In a January 2000 test of the Wild West Guns Co-Pilot, a Marlin 1895, and a Guide Gun, all chambered in 45-70, we wrote, “The Guide gun was drilled and tapped for scope bases on top of the action. As noted above, the Marlin Guide Gun does not have Micro-Groove rifling. Instead, it was cut with conventional six-groove rifling that Marlin calls Ballard rifling. With Buffalo Bore’s 430-grain cast loads, which neither of the other rifles would handle, we were able to get 2.5-inch average groups at 100 yards. We got 1.7-inch average groups with the conventional low-intensity jacketed soft-nose Remington ammunition in the Guide Gun. With the Buffalo Bore loads, we got the smallest group of this test report, three into half an inch, and average groups of 0.8 inch.”  — Todd Woodard

I received a warning from CMP on Monday stating that 30-06 ammunition with a bullet weight over 172 grains should not be fired in 03 Springfield, 03-A3, or Garand rifles. I called CMP and talked to Kathy, and have since received emails from Kathy saying use of this ammunition could result in severe damage. I have not received any contact from COO Mark Johnson. I have reloaded and shot 180- and 220-grain Nosler partitions for years in two different 03s. Could Gun Tests research this information? — Dan

Hey Dan, we go into this topic in depth on page 16. Generally speaking, the issue with heavier bullets is that they can create spikes in pressure, even when placed atop seemingly otherwise safe handload powder charges. The higher pressure above safe levels can damage operating rods (arrow above), which Joe Woolley covers in the article. — tw

Greetings. I read with great interest Mr. Cain’s Firing Line letter in the April 2021 publication regarding the issue of “hoarding” ammo.  While the author’s lengthy discourse against hoarding ammo advances many ideas of what you should be doing instead of purchasing ammo, he concludes his argument when he instructs the reader to “Stop buying ammunition you don’t need.”  I was struck by the irony that a firearms owner would tell other people what they need or don’t need.  Isn’t this “need” argument one of the positions of those who are determined to limit our ability to own firearms? You don’t need an AR because…  All his letter did was make me want to buy more ammo.  Perhaps a better understanding of human nature, a softer tone and a request to leave some ammo for others would have conveyed the same sentiment. —David

Hey David. We have seen many, many complaints about people buying large amounts of ammo during the recent shortage. It’s frustrating to everyone. Normally, I wouldn’t be happy being limited to only 200 rounds of 5.56mm I got standing in line at a local store, but I was kinda happy because the quantity limit meant I actually got 200 rounds I didn’t have.  — tw

Re “Go-Bag Rimfire Rifles from Savage, Ruger, and KelTec,” September 2020 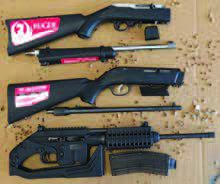 I was disappointed that you did not include the original (or close to it) takedown 22: the Marlin 39. I would be interested in how it compares, especially the short Mountie version. — Robert

Hey Robert: The M39 is a takedown, yes, but it’s a lever action, not a semi-auto, so it wouldn’t have been a good fit for that article in September 2020. Still, I’ve forwarded your ask to Robert Sadowski for development. We don’t do shooting collectibles all that often, but lever-action 22s are interesting rifles, even non-takedown ones. — tw

I read the aforementioned article wondering why someone would chamber essentially a rifle round in a snubnosed revolver. The muzzle flash and wasted powder was evident in the muzzle energy results. I bought my wife a Ruger LCR in 327 Magnum. She uses the 32 Long Colt rounds, and this revolver has minimal recoil.  It fits just right in her hand, and the trigger is easy for her to pull. Plus it’s a six shooter. I will also carry this gun because it’s very easy to conceal. I will use 327 Magnum lower-recoil loads designed for short-barreled revolvers. I would like to see a comparative test with this and other 32-caliber revolvers and also a comparison between 32 Colt, 32 Magnum, and 327 Magnum rounds fired out of the Ruger LCR. Gun Tests is one of the most relevant magazines for the avid shooter. Love your magazine. — Mark

Hey Mark: Thank you for the compliments. Robert Sadowski has a 32-caliber revolver story in the works, but it doesn’t include the Ruger. I’ll slate it for another story. We have tested 32-caliber Magnum rounds in the past. In the July 2013 issue, Bob Campbell tested six 22 Magnum cartridges and two 32 Magnum rounds. The latter two were the Black Hills 32 Magnum 85-grain JHP D32H&RN1 and Federal’s Personal Defense 32 Magnum 85-grain JHP C32HRB. Of them, he wrote, “The 32 H&R Magnum isn’t a Magnum by most standards, and in fact the results from this cartridge are often disappointing. However, the 32 Smith & Wesson Long 98-grain RNL loading seldom produces more than 700 fps from a 4-inch barrel, so the 32 H&R Magnum is an improvement.

The 32-caliber bullet used in the 32 Magnum doesn’t expand to the required bullet diameter we expect from a defensive caliber. It just doesn’t measure up, in our opinion, but if you cannot handle a 38 Special for one reason or the other, the 32 Magnum is considered an option.

Since our primary focus was the 22 Magnum, only two loads were tested. But, then, there isn’t a lot to choose from. Per our tests, the 22 Magnum, based on superior performance and greater economy along with low recoil, would be the winner.

Power factor with the 32 is twice what it is with the 22 Magnum, and when you are looking for low recoil, the difference is noticeable, particularly to senior shooters. Plus, you cannot stuff a 32 in the North American Derringer.

The 32 Magnum costs twice as much as the 22 Magnum, but clearly doesn’t deliver twice the performance. One 32 load expanded slightly more, one had greater penetration, both are practically equal.” Both earned A grades for self defense.

We have also tested 32-caliber wheelguns themselves in the April 2008 issue. In that article, “.32-Caliber Wheelguns: Ruger’s SP101s Excel at Self-Defense,” we looked at small six-shooters in 32 H&R Magnum and the then-new 327 Federal Magnum. Roger Eckstine wrote in that article, “Our Ruger SP101s, the KSP-3231X and KSP-32731X, were chambered in 32 H&R Magnum and the new 327 Federal Magnum caliber. The 32 H&R revolver was very accurate and more than comfortable shooting any type of 32-caliber ammunition. The 327 Magnum was a real treat. This new caliber nearly matched the power of 357 Magnum ammunition without being especially loud or violent. Accuracy was very good. The downside was that the 327 Magnum ammunition is not yet widely available. Also, we noticed that the chambers were prone to fouling. Our staff was nevertheless unanimous in favor of more guns chambered for 327 Magnum. Both guns benefit from the unique adjustable rear sight. No matter which SP101 you choose, the Gould & Goodrich T727 Body Guard is a great way to conceal a handgun. The backing made it comfortable, and it can be worn to suit the individual. Two pouches for extra ammo were sewn in, too.” Pictured above, it’s still available from TacticalGear.com for $47. — tw

Love every issue. Like to plink in the backyard. Want to keep the noise down. Would like a feature comparing 22 LR bolt-action rifles supplied with a threaded muzzle. Looking forward to your usual best. — Ken

Hey Ken: We’re always happy to venture back into the quiet world of suppression, but perhaps we’ve already done what you want. In the July 2018 issue, we tested “Threaded-Barrel Rimfire Rifles: Savage, CZ, and Ruger Compete.” The CZ-USA 455 American Synthetic Suppressor-Ready 02114 had the best overall shooting performance with a suppressor attached. The Ruger American Rimfire Standard 8305 shot all our test ammos, ranging in weight from 36 to 40 grains, under 1.1 inches at 50 yards. The third rifle was the Savage Arms MKII FV-SR Threaded Barrel 28702. It loved Eley Hollow subsonic ammunition. All three fed and fired without incident, and they’re affordable, easy ways to affix a suppressor. We preferred the Savage, but you really can’t go wrong with any of them. We used a SilencerCo 45 Osprey suppressor in the test. The CZ is discontinued, but is still available. — tw