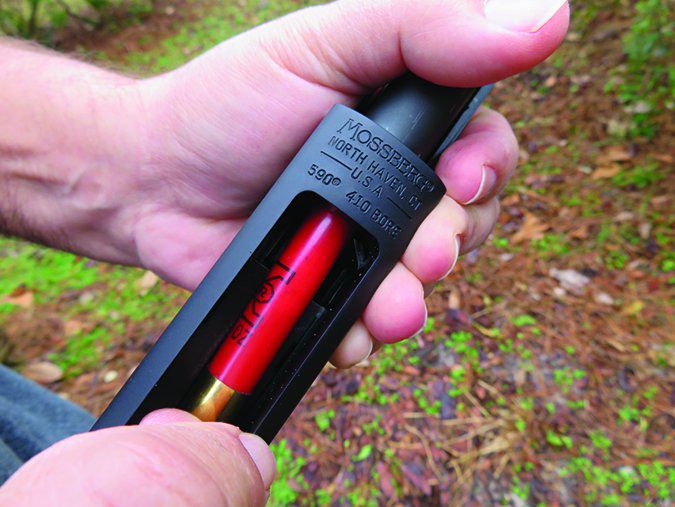 Just finished your article on sub-gauge pumpguns. I have a Mossberg Shockwave in .410 bore and really enjoyed your article. One thing that I have done with mine is to install a blue laser. Mounted on the top of the receiver, it puts the push button directly forward of the safety. Group size with slugs is easily contained in a coffee cup during from-the-hip shooting. Thanks again for your great articles. — Bill

I have been a subscriber to Gun Tests since its inception and have used your advice to buy many guns — and to avoid even more. I am interested in one of the new short-barreled shotguns for defensive carry in my vehicle (I am licensed to carry). Your review of “Sub-Gauge Pump Guns” was very timely. Do you plan to test the 12-gauge versions? I am particularly interested in how the Mossberg Shockwave stacks up against the Remington 870 Tac-14 and the new V3 Tac-13. — Dr. Greg

I have forwarded your request to Robert Sadowski, who has put together the previous coverage we’ve done of these shotguns. We did test the Mossberg 590 Shockwave 50659 12 Gauge in the October 2017 issue. Issuing the 590 an A grade, Our Team Said: “Loaded with Aguila minishells and equipped with the OPSol Texas Mini-Clip attached, the Shockwave offered a lot of firepower. We really like shooting the minishells through the Shockwave. The 2.75-inch shells were less fun to shoot due to recoil. We found the Shockwave accurate and effective. For a short-range defense weapon in cramped conditions like a vehicle, the Shockwave is a good choice.” — Todd Woodard

To John’s inquiry regarding hearing protection on the range. After trying several different models, I find the Peltor Comtac to be the best hearing protection to use with glasses. I generally wear them with foam ear plugs at the range so I can turn the volume up loud enough to hear conversation and range commands but still get the most possible hearing protection. I highly recommend them for hunting as well.

I think they make it easier to hear game moving through the woods as they seem to amplify the higher frequency noises like leaves being stepped on while muting low frequency noise like wind blowing. — Mark

I enjoyed your article on the 357 Mag Revolvers from Traditions. How about an article on 357 Magnum revolvers comparing the following firearm companies: Traditions, Taylor, Taylor Fine Tuned, and Heritage? — Rosemary

Todd, just wanted to pass on some experience with the S&W M&P EZ 380 ACP. After reading about it in Gun Tests, I went to take a look at one in our local gun shop. It seemed really great. The lady I took with me could rack it easily and liked the light weight and potentially smaller recoil. Taking it to the range, we were still very impressed, and I started carrying it to see how it would holster/carry in concealed carry. What I found is that the magazine release protrudes too far, and the tightness of the holster would often cause the magazine release to engage, whereupon drawing the pistol, I would find I had no magazine feed. This is a serious problem. I think S&W’s goal was to build an easy-to-operate pistol, but the operational needs were not fully investigated before release. Not sure if you have done any investigation of this pistol or not, but I would be interested if your investigators would find the same issue upon further review. It is not constant, but now and then, when I must twist or sit in a way that increases the tightness of the holster, the holster comes in contact with the magazine release. Really enjoy your work. I have made several decisions based on the information you present. Thank you very much. — Doug

Doug: Thanks for sending this. Now other readers can be informed of the issue you found. In our test in the August 2018, Our Team Said: “We like the Smith & Wesson Shield. We are generally not comfortable with the power level and wound ballistics of the 380 ACP; however, loads like the Black Hills Ammunition Honey Badger and the Federal HST make the cartridge much more attractive than the previous choice of ball ammunition or a JHP that underpenetrates. The pistol is a joy to fire and use. It is more than accurate enough for personal defense. In fact, while we are not concerned with field and trail use, one of the raters noted it is accurate enough for small game as well, and the centerfire cartridge is far more reliable than rimfire ammunition, making the Shield a better choice for personal defense than any 22 LR rimfire pistol. We like the concept of the Shield and the pistol itself and give it a solid A rating.” We’ll look into it. — tw

Hi Todd & Co. I am a retired pharmacist, but I maintained my FFL to service my community. I have carried concealed for over 40 years and have odd (?) tastes on subjects covered in February 2019 issue and others. I carried a $25.80 Remington/Ithaca 1911-A1 in a Bianchi pancake holster for a few years until the holster got soft and stuck to the 45. I replaced it with an Uncle Mike’s Sidekick, size #5. I still wear this holster every day, when I have some form of 1911. I have tried a variety of concealed-carry new-age pistols lauded in your pages and have tried on a like number of inside-the-belt holsters, more than a dozen of each. I have a second, brand-new Uncle Mike’s Sidekick. The only problem is, it is impossible to wear this raggedy-ass thing out — 35+ years with Remington/Ithaca 1911s, a Colt Lightweight Officer’s model, AMT Hardballer, Springfield Armory Loaded pistol, etc. I practiced with the chosen one that I carried in my pharmacy, as John Shaw had taught me. The stock Remington/Ithaca had the fewest thingamabobs to hang up on. Resting on my right hip, under my iconic pharmacist blouse, I could sweep up the blouse/shirt, withdraw the 1911, and slap-cock it with the left hand on the way to presentation and a two-handed grip. Ready in less than a second! That was always better than the concealed-carry pistols suggested in your magazine. They all either snagged upon presentation or just didn’t fit the hand or hit well with the first through third shots. The polymer holsters which came with a couple of them made noise, were uncomfortable, and/or made clicking noises when drawing.

Bottom line: The pistol must settle comfortably in the hand and chew small holes at 10 to 15 yards. The pistol must drop easily into your holster of choice, be secured in place with normal or unnatural activity, and allow presentation with a bare minimum of drag or noise. My choice is a 1911 or clone with as few appendages that can get caught on. I traded most all of the C.C. guns for two 1858s and a 1875 Remington a BP Sharps and a Merwin & Hulbert 44-40. What I kept was the old Remington/Ithaca 1911-A1, the Springfield Armory 1911 Loaded, and the Colt Government 380, all of which fit the hand and point/hit to the desired spot. The new Remington makes an acceptable hole. Dance with who you brung and dance often. Practice, practice, practice. Thanks for a great rag. I have them bound for my customers to read and have at least 50 pistols, rifles, and shotguns for them to try out. —Mark

Hey Mark: Lots of folks still prefer the 1911 action over all others. I’m not surprised at your choices. I haven’t seen a Colt Government 380 (above) in ages, but from what I’ve heard, their owners loved them. — tw

Just read your editorial in the latest Gun Tests, received today 2/22/19. I believe that in 10 to 20 years, if/when there’s another simultaneous Democrat-controlled White House and Congress, that the conditions existing in NY, NJ, MA, CA, MD, etc., will become mainstream law. The 2nd Amendment will be completely ignored. If those states’ infringements are able to exist, they can and will be extended to the entire U.S. under left-leaning legislators. The generations being raised now are living with much different social conditions and expectations than you and I experienced. I’m almost glad I won’t be around to see it! Thanks for reading, I enjoy your publication very much. — Art

Hey Art: I hate being the bearer of bad news, but I agree with you. The advancing restrictive state laws on gun ownership, and the concurring legal decisions that let them stand, are very worrisome. And there’s no end in sight. — tw

In the threaded-barrel 45 review, I can see the Custom Carter has a bad sight picture with the suppressor, but do the accuracy test anyway. I would like to see how much that actually did affect the shooting. I personally think the sight picture was as good as many pocket-pistol sights, and I would honestly still like that shooting review on the poor sight picture. I think your guys would not have gone down that much in the actual shooting groups. But we all want to know that, not guess that. Don’t cut the tests short because they look like they might be bad. We want the actual results.

On the 20 gauges, a guy told me many years ago that the 20-gauge magnum has the same amount of powder and the same weight of lead as a normal 12 gauge. So if these are 20-gauge magnums, you actually have a 20 and a 12 gauge in one gun. Yes 20-gauge shells cost more now than 12, but that was not the case years ago. I do think a 20-gauge magnum kicks harder than a 12, because all being equal on the powder and lead, the 20 is lighter, so it kicks harder than a standard 12. And thanks for throwing in the details on how long leather holsters wear. — Don

Hey Don: Sorry it wasn’t clear, but on the threaded-barrel 45s, we did shoot the Carter with the suppressor and the gun’s open sights, and the results were listed in the table. But the experience showed us the existing sights weren’t really usable outside perfect conditions. Because the sight picture in the photo was so thin, that’s why we felt compelled to add the Crimson Trace green laser. — tw