For 2019, Sturm, Ruger & Company, Inc. has introduced magnum models of the Ruger Precision Rimfire rifle and a new BX-15 Magnum magazine that accept 17 HMR and 22 WMR cartridges. Like its 22 LR predecessor, these new magnum offerings maintain the same ergonomics, trigger, and manual of arms as the larger centerfire Ruger Precision Rifle. The Ruger Precision Rimfire has a molded, one-piece chassis and adjustable buttstock assembly manufactured of glass-filled nylon. The Quick-Fit Precision Rimfire stock allows the rifle’s length of pull and comb height to be easily adjusted for proper fit over a range of shooter sizes, outerwear and shooting positions. The 18-inch cold hammer-forged target barrel has a 1/2″-28 muzzle thread pattern for easy pairing with muzzle devices, including the Ruger Silent-SR. The 15-inch free-float handguard with Magpul M-LOK slots provides scope clearance and easy mounting of M-LOK-compatible rails and accessories. The Ruger Marksman Adjustable trigger can be externally adjusted from 2.25 to 5 pounds with a supplied adjusting wrench. The rifle is topped with a flat Picatinny scope base and ships with one 15-round BX-15 Magnum magazine or one 9-round JMX-1 rotary magazine. The BX-15 Magnum is also compatible with Ruger 77/17, Ruger 77/22, and Ruger American Rimfire rifles chambered in 17 HMR and 22 WMR. The magazine has stainless-steel feed lips, a “constant force” spring, high-lubricity polyacetal anti-tilt follower and a glass-filled nylon magazine body. The Nos. 8402 and 8403 are chambered in 17 HMR differ in magazine capacity (15 and 9 rounds respectively) and retail for $529. Likewise, the 8404 (15) and 8405 in 22 WMR (9) also have MSRPs of $529.

At SHOT Show 2018, Weatherby announced it was relocating to Sheridan, Wyoming from Paso Robles, California. In 2019, Weatherby will mark the move by introducing two Wyoming Commemorative rifles, the Gold and the Silver. Both versions will be chambered in 300 Weatherby Magnum and will feature the “Bucking Horse and Rider” engraving on the floor plate. The highly figured walnut stocks have raised-comb Monte Carlo designs, right-side palm swells and a custom-designed mountain scene integrated into the classic fine line checkering. You’ll pay for the privilege of owning either rifle, with the list price for the Gold model being $10000 and $6500 for the Silver.

The new MSR 15 Valkyrie rifle gets maximum performance from the 224 Valkyrie cartridge, which was developed to deliver supersonic velocities past 1,300 yards, extremely flat trajectories and match accuracy. Savage’s competition-ready MSR 15 Valkyrie gets the most from the cartridge’s unprecedented capabilities with an upgraded 18-inch barrel with 5R rifling and a crisp two-stage trigger. Its Elite Series FDE Cerakote finish protects the upper and lower, and its adjustable mid-length gas system can be customized to specific ammunition for the most reliable cycling. MSRP: $1499.

The Mauser 18 hunting rifle has become one of the first long guns chambered for Hornady’s hot new 6.5 PRC cartridge. The 6.5 PRC is a magnum version of the 6.5 Creedmoor and has a flatter trajectory and higher impact velocity than the 6.5 Creedmoor. Utilizing moderate powder charges results in repeatable accuracy, low recoil and high velocities with performance beyond 1,000 yards. The 6.5 PRC is an excellent chambering for F-Class benchrest shooting and hunting medium to large game. “The Mauser 18 is a big seller in the United States because of its ultimate reliability, durability and accuracy at an unbeatable price point,” said Christian Socher, CEO of Blaser USA. “We wanted to add the 6.5 PRC chambering as an additional caliber option for those who hunt and shoot at longer ranges.” With a synthetic stock, the Mauser 18 will withstand harsh hunting environments. A three-position safety allows the shooter to safely carry a round in the chamber without fear of the bolt being nudged out of battery. For optimum grip, the stock features two areas of soft-inlay. The rifle carries a five-round magazine and an adjustable trigger. In addition to the 6.5 PRC chambering, the Mauser 18 is also available in 243 Win., 270 Win., 308 Win., 30-06 Springfield, 7mm Rem. Mag., 300 Win. Mag., and 6.5 Creedmoor. MSRP: $699.

Daniel Defense has taken the modularity of the AR platform and integrated it into a bolt-action rifle. From an interchangeable cold hammer forged barrel to a user-configurable stock, the Delta 5 features out-of-the-box customization that would normally require professional gunsmithing. Other features include a mechanically bedded stainless-steel action with integral recoil lug, a three-lug bolt with a 60-degree throw and floating bolt head and a removable bolt knob with a 5/16-24 thread. The trigger is an adjustable (1.5 to 4 pounds) single-stage Timney Elite Hunter with two position safety. The receiver is topped with a Picatinny scope base with 20-MOA (5.8 MRAD) of elevation with four #10-32 bolts. The bottom metal is integrated with pillars and barrier stop fitted into a carbon-fiber-reinforced polymer stock with adjustable cheek riser (height, yaw, and drift movements) and buttstock adjustable for length of pull and buttpad height. The handguard has 14 total M-LOK attachment points along forend with one point on the bottom of buttstock. For easier carry, there are three M-LOK QD sling points. The rifle accepts 5-round PMAG 5 7.62 AC – AICS Short Action magazines. MSRP: $2199.

LSI is now fitting its Howa 1500 STD short actions, mini actions and long actions with the ORYX Chassis by MDT. MDT worked side by side with Legacy to create a custom chassis for the Howa 1500 actions. The result is a full monolithic aluminum chassis with an adjustable length of pull and adjustable comb height. In addition, the large palm swell has an overmolded grip. The ORYX chassis has an M-Lok-compatible forend and accepts AICS pattern magazines. The Mini Action chamberings are 223 Rem., 7.6239, and 6.5 Grendel. The Short Actions are available in 6mm CM, 6.5 CM, and 308 Win. in 20-, 24-, and 26-inch heavy-barrel choices. The Long Action chambering is 300 Win. Mag. The chassis accepts AICS-compatible magazines and comes in OD green or gray color schemes. LSI offers a H.A.C.T. 2-stage trigger in the packages along with a lifetime warranty and a sub-moa guarantee. MSRPs start at $1059.

Cimarron Firearms has two new reproductions that may be of interest to lever-action-rifle fans. Having been reproduced directly from an original Henry in Cimarron’s antique collection, the 1860 Henry Civilian 44 WCF CA239 is considered by many gun-savvy firearms enthusiasts as among the most handsome of all replica arms. It comes in either a brass-framed model or the early-type Henry with color-case-hardened frame. It sports an authentically-styled 24-inch octagonal barrel with the distinctive front-loaded tubular magazine, integrated into its shrouded barrel. Working with the design elements of the unsuccessful Volcanic rifle, an earlier attempt at producing a lever-action self-contained cartridge arm, Winchester plant Superintendent B. Tyler Henry designed this lever gun to handle his new 44 rimfire copper-cased cartridge. Despite only having produced somewhere around 14,000 Henrys between around 1862 and 1866, the gun was sought after by Civil War soldiers who could obtain one with a supply of ammunition.

This “Sixteen Shooter” proved itself in battle as well as on the frontier, and was used by many frontiersmen in the years right after the Civil War. It was used by Wells Fargo detective James Hume, Union Pacific Railroad and many other Old West notables, and more important, it paved the way for all future lever-action rifles. Dealer price, $1151. The company is also offering the 1866 Yellowboy “Pawnee” Carbine with Brass Tacks. Chambered in 45 Colt with a 19-inch round barrel, this rifle was originally known as the “Improved Henry” due to its patented loading gate on the side of the frame. Designed by Nelson King, Winchester’s plant superintendent, the 1866 model was known as the “Yellow Boy” by the Native Americans because of its brass frame. The ‘66 model was the first true cowboy lever-action and the first that adapted well to carrying in a saddle scabbard, due to its slab sided design. Cimarron offers several 1866 Yellowboys, including a brass tack-decorated 19-inch “Pawnee” carbine, CA288G19, with a dealer price of $1075. 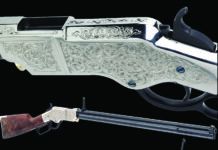