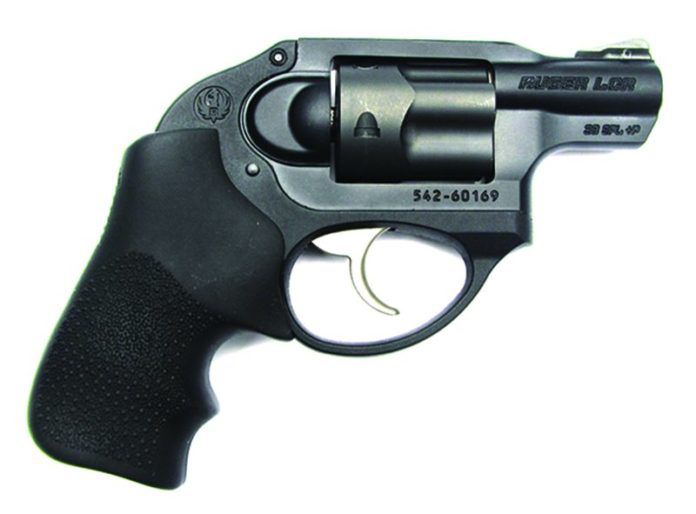 I’m a long-time customer and would like to get three or more comparisons of 357 Magnum lightweight snub-nose revolvers. I want to give my 73-year-old female cousin a few choices to consider with price and performance noted, in particular, a 6-shot revolver, preferably with smooth edges and hammerless. I know of no better people with whom to inquire about this than Gun Tests.— Winslow

Hey Winslow: Check the December 2015 issue for a wrap-up of 17 snubbies in a variety of chamberings. In particular, however, check out the Ruger LCR No. 5401 38 Special +P, which we reviewed in the November 2013 issue (Grade A-).

The LCR (Light Compact Revolver) was a radical departure for Ruger when it debuted in 2009 with its use of polymers, aluminum, and steel construction. What is also radical in the LCR is that there is no hand-fitting of parts, which helps keeps the cost of labor down, as well as the price. The polymer fire-control housing makes up the grip and trigger guard, while the frame assembly is aluminum. The LCR can handle +P loads. Recoil is a non-issue with standard 38 Special loads.

I know you specified you wanted a hammerless version, but your cousin may prefer an exposed-hammer model, such as the Smith & Wesson Model 60 #178013 357 Magnum reviewed in the September 2014 issue. Reason: Cocking the hammer allows for single-action firing, which can help if her grip-strength is compromised. This is an excellent choice for a concealable or home revolver because it is thin, lightweight, has an excellent trigger in both single action and double action, and has usable sights.

The index shows the captioned rifle being reviewed in November. When I go online for past reviews, I only find a 2007 review, and it was not from November, as stated in magazine. The 2007 review is prior to Bushmaster selling the company, and I am looking for review of the rifle after the company was sold. Have you reviewed the rifle since the 2007? —J

In the 2015 Index, which appeared in the Gun Tests January 2016 issue on pages 28-31, the * beside a gun name designates a particular firearm as being an abbreviated mention in Downrange, Short Shots, a sidebar, or in a Value Guide. That * notation is listed at the bottom of each page of the index. The * Bushmaster Patrolman’s Carbine BCWA3F 16M4 you’re looking for was included in the November 2015 issue, in a Value Guide of AR-15 rifles, on page 12, 6 entries from the top of the page. The original review, as the Value Guide says, was from October 2007, on page 24. We have not done another review on that rifle. — tw

Re: “Higher-Retention Holsters for Open Carry, Part I, January 2016

The Blackhawk GripBreak 421903BK holster seems like just the ticket for this coming year for those of us who are predisposed to reject Kydex and plastic holsters for reasons of them being ugly and inelegant. Problem is, no one has the GripBreaks. Blackhawk’s website provides no information on direct ordering. Carter’s Country and Fountain Firearms in Houston basically said, “Huh?” when asked about the holster. You did a good article on the options; now if I could just get hold of the one you rated highest. — Goldy

The BlackHawk.com site currently doesn’t allow online ordering. It said, “We’re making some exciting changes at BlackHawk.com. In preparation, we have temporarily suspended our eCommerce platform, and you are unable to order products off of our site at this time. The good news is, this is not permanent, and we have a number of our retail partners ready to help you purchase our products at great prices. Please see the list below. We’ve also added a Dealer Locator to help find a store in your area. Enter your information to track down our latest gear.” We saw where the two retailers you mentioned were part of the list, and we’re sorry they couldn’t help you. But we typed in “421903BK BlackHawk Holster for sale” in a browser search and got back several dozen online sites that can get the holster to you. — tw

My issue arrived today, and if this sets the standard for 2016, you fellers will be working hard. What a great way to start!

Check your Schmidt-Rubin for a possible Christmas present. Remove the buttplate and see if there is anything under it. Many original owners wrote a personal note or ID and hid it under the plate.

Don’t know if you grew up in an area like me, where local department stores, like Rose’s, sold all manner of import rifles like K98s and Enfields, along with M1 Carbines. How many of us just passed them up and wish we could go back to that era and buy them all now?

Hi, Todd: For more than 21⁄2 years, I haven’t been able to partake in my favorite activity of plinking with my Remington Fieldmaster 572, which I was able to obtain when I was 16, back in 1962 when I lived in Manlius, New York. For close to 50 years I have enjoyed this fun activity, but for some reason, no local stores carry 22 LR cartridges anymore. I traveled about 60 miles to a big city in Iowa, and sporting-goods dealers there were out, too. They even said they thought the Department of Homeland Security just bought 3 million dollars worth of this ammo — which blew me away. If you know, what gives with this shortage?— Ed

Hey Ed: 22 LR has been in short supply for a couple of years now, but I hadn’t heard of a DHS buy of 22 ammo prior to your note. But $3 million isn’t that big an order when we’re talking billions of rounds of rimfire ammo. What the ammunition makers tell me makes economic sense: 22 LR has less margin in it than centerfire rounds, and they’re working three shifts to cover the demand for standard centerfire handgun and rifle ammo — 9mm, 45, 223, and so on. The 22 quantities being made are about the same as they’ve always been, but demand is so much higher across the board, it disappears, and there’s no economic incentive for the major makers to ramp up a lot more 22 LR manufacturing. Now, the next question is, why the heightened demand? I think people are scared. We are buying while we can. It looks like 2015 will set an all-time high for gun sales, and guns chew up ammunition. A lot of folks are entering the gun culture, and they get started, often, with 22 LR, for the same reasons you liked to shoot it. Hope this explains the shortage, at least as I see it. I’d suggest you go to Ammoseek.com and see what you can find — I also have alerts set at several retailers, and I buy a brick (500 rounds) every couple of months to have on hand. — tw

When you set up your gun trust to buy a suppressor, did you go through an attorney or did you use a canned program like the one on Silencerstore.com? Thanks for your time and for helping me out. — Frank, a longtime subscriber

I actually went through the retailer, Full Armor Firearms in Houston, who set up the trust as a legal container for a silencer I bought from them. So, I assume SilencerStore.com would do the same thing. However, looking back on it, I wish I had used an attorney, such as U.S. Law Shield, just in case. — tw

How About a Magazine Test?

I’m a longtime subscriber, but I don’t recall ever reading a test and comparison of aftermarket magazines from companies such as Mec-Gar, Triple K, Pro Mag, etc.I have my own opinions of these and other brands, but rather than recite anecdotal experience, I’d like to see the results of any independent testing you have done.Any chance you’ll be doing such a review in the foreseeable future?If so,I suggest you not just include the staple 1911, Glock, and AR mags, but also some of the rarer stuff for older, out-of-production pistols such as Star, Luger, Astra, etc.Keep up the good work! — William M. Kohnke, Paladin Armory, Elliston, Montana

We have already done a comprehensive test of AR-15 magazines in the May 2014 issue. They were grouped into polymer and metal bodies, with the 10 polymer magazines being Command Arms Accessories 30-Round Polymer Magazine, IMI Defense Polymer 30-Round AR-15 Magazine, ProMag Industries 30-Round Black Polymer Magazine, Command Arms Accessories AR-15 Countdown Magazine, SIG Sauer AR-15 30-Round Polymer MAG55630BLKP, S.W.T. 30-round AR-15 Magazine, Thermold Master Molder Magazine 30 Round M16/AR-15 M16AR1530, Troy Industries Battlemag Magazine AR-15 30-Round Polymer, Magpul AR-15/M16 PMag Gen M3 MAG557BLK, and the Magpul PMag 30 AR/M4 Window Gen M3 MAG556BLK. The five metal-body units were Cammenga’s AR-15 Easymag 30-Round EM3556, ProMag Industries 30-Round Blue Steel Magazine, OKAY Industries USGI 30-Round AR-15 Magazine, NHMTG AR-15/M16 30-Round Magazine MA02L, and the Brownells 30-Round Gray AR-15/M16 Magazine w/SS Spring 200200. In our view, the Brownells, NHMTG, and OKAY magazines are excellent examples of aluminum magazines. If you prefer polymer bodies, the PMags were both top choices, with the cartridge-counter window option giving that model the edge over the regular PMag. The Troy was also a good choice. I’ve assigned a follow-up article to Bob Campbell, who has already begun a comparison of the 1911 types.— tw