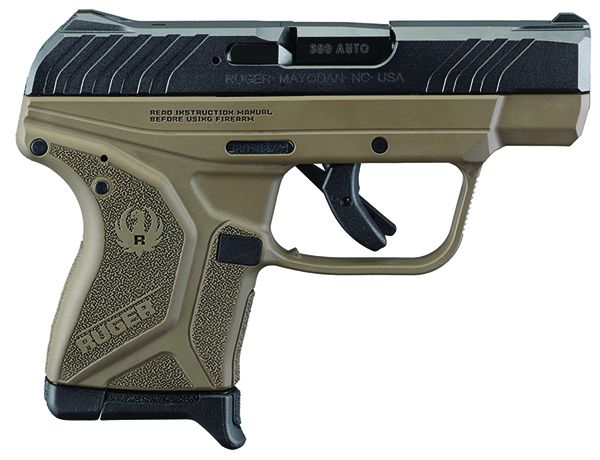 Dear Sirs: Have you ever tested/reviewed/compared the (newer) Ruger LCP II Pistol in 380 ACP that was introduced in 2016? — Mick

Hey Mick. Yes, we recently tested a later model LCP II in the November 2020 issue, “Used 380 ACP Pistols: We Shoot Glock, Colt, NAA, Ruger.” Our particular test gun was a Bangers Distributor Exclusive with a black slide and flat-dark-earth frame. The particular 3792 model is still listed on the Ruger website as being available new, as are several other iterations in various color schemes. From the review: “We lubricated the pistol and fired it, and we found that despite the pistol’s light weight, it wasn’t unpleasant to fire. The trigger and well-shaped grip were advantages. The sights were much clearer and easily acquired than the Guardian, equal to the Colt, and a bit behind the Glock. We ran across several snags that were not malfunctions perhaps, but rather were break-in concerns. We simply could not press the magazine release to lower the slide. It was too stiff with either loaded magazine. We grasped the rear of the slide and let it ride forward to load the chamber. Several times, the FMJ loads caught and stopped and did not feed properly.

We dropped the magazine and began again. These problems disappeared after five or six magazines of ammunition. Perhaps it was a break-in glitch, it did not continue, and we invested a little more ammunition after the main shoot-out to be certain the Ruger had properly grooved in. It had.” Then, “Our Team Said: The Ruger has much merit. Reliability is there, the trigger is good, the pistol has good sights and forward cocking serrations. Recoil is also there, but it’s not startling. The LCP II is the lightest of the four pistols and is the one that offers the smallest overall footprint. We rated the pistol down a half grade on early glitches that straightened out with time and another half grade on poor accuracy compared to the Colt and Glock. But if your goal is to find a light, small handgun, this may be your best bet.” Grade B. I’d encourage you to download the November 2020 issue and read the entire review. — Todd Woodard

Todd, I have been a subscriber for many years and have bought products that Gun Tests has given a good grade. One of those companies is Lobo Leather, a company that I cannot recommend to anyone due to their lack of customer service.

After reading a review about a year ago for Lobo’s Offset Belt Clip holster, I bought one for an S&W J-frame. I also bought two holsters for a 1911 and an ammo carrier and all was well. This year I ordered another Offset Clip holster for a G43, along with a mag pouch, and there the problems started.

When I received my order, my first thought was that the color was wrong and the mag pouch was built completely different than what was shown on their website. I emailed them with pics of the holster and pics of their website showing that the colors did not match and asked what the color was of the holster I bought a year ago, since they do not provide a receipt or invoice for anything, I was guessing at what color I had ordered. I also mentioned the magpouch, and I did not receive an answer.

I then emailed again to ask for a refund for the magpouch, they then called and agreed to remake the pouch. They had redesigned it and sent me the new model, which was not what I wanted, they also told me what color holster I had ordered before, which showed that they received my email, but they never responded.

They asked me to mail back the pouch that they had sent, at my expense. Shortly after receiving the holster, I contacted them because the G43 holster was constructed differently than the J-frame holster and was quite uncomfortable. I asked if it could be modified, and I never received an answer. Then the new mag pouch arrived. Their website did not specify what size belt this pouch would fit, but the belt loop was excessively big, big enough to be sloppy on my 1.75-inch 511 competition belt. My other holsters and ammo carrier from them only fit on 1.5-inch belts, so I emailed with pics and asked for the pouch to be fixed. Again there was no response.

I bought their products based on the A grade given in Gun Tests, and as a customer of Lobo Leather, I believe that grade needs to be knocked down due to their service. — Tom Freyslaben, X-Ring Firearms Training, Santa Rosa, CA, X-ringFirearmsTraining.com

Hey Tom: Sorry you had a bad experience with Lobo Gun Leather. I’ve reached out to them for an explanation and haven’t heard back yet. Our last review of a Lobo product was the Offset Belt Clip IWB in the May 2020 issue and pictured nearby. I will say our dealings with them have been brief and professional and productive. Not to excuse the trouble you had, but I cut businesses a lot of slack in 2020. — tw

Hi, Todd. Every issue, always great. I appreciate it. I have to give the obligatory “carried a 1911 for 30 years, love it to death, hate to be cheating on it, but compared to CZ, it’s as if Colt doesn’t even care.” In this article, I don’t see how the Colt even gets into the competition with the CZ Shadow 2. Maybe the Lone Wolf, but that’s a highly qualified maybe. The speed and ergonomics of the Shadow 2 (and most CZs for that matter) is so far beyond the Colt, it’s not even a fair comparison. And the ergonomics of the Glock frame don’t even try to come close to the S2. Seems more appropriate to compare the Shadow 2 to the TSO (Target Sport Orange) or models from STI or Sig 210 or 5 series. Just my two cents. — Dave 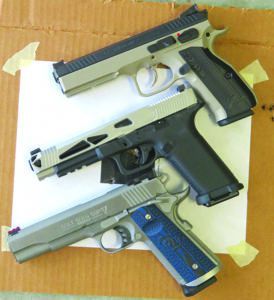 Hey Dave: We agree the CZ-USA Shadow 2 91255 9mm Luger, $1119, is an awfully good gun. It did get an A grade, whereas the Colt got an A-. We realize a lot of shooters are platform specific, and as good as the S 2 is, they’d not choose it over a Glock-style LWD or Colt Gold Cup Trophy if they’re already invested in those platforms. Maybe we need to carry the S 2 over to another test, as you suggest. — tw

Todd, I don’t find that the Heckler & Koch HK 4 (380 ACP, 1970s era) was ever reviewed in Gun Tests. I’ve had a couple, the current one bought new in 1975. Your review in November of 380 ACP pistols, “Used 380 ACP Pistols: We Shoot Glock, Colt, NAA, Ruger,” made me wonder what I’m losing, if anything, by sticking to this old familiar pistol versus a new design.  — Michael 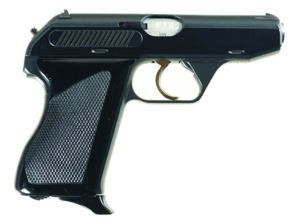 Hey Michael: You’re right, we haven’t reviewed the HK 4 (shown above) made by the German firm of Heckler & Koch, GmBH. It was introduced in 1967 and went out of production in 1984, so it predates Gun Tests by four years. One reason to keep yours would be if you have the extra barrels that interchanged (22 LR, 25 ACP, 32 ACP, and 380 ACP) and magazines for those other cartridges. That kind of flexibility doesn’t really exist in today’s pocket 380s. The gun is most comparable to a SIG Sauer P230, a Walther PP, or a Mauser HSc. I’ve carried the same revolver for nearly 20 years, and added a laser because I can’t see the sights as well as I want. That might be a reason to switch to a later-model 380, such as a SIG P238. — tw

How About a Scorpion?

I am an avid subscriber and really enjoy seeing the firearms that I own currently in your reviews. Thankfully, my firearms are at the top of your lists. I have a SIG Scorpion [shown below], and it is, in my opinion, a quality handgun with a lot of bells and whistles. In an upcoming issue you are testing full-framed 45 ACPs, and I wondered why this pistol isn’t in the list? Also, I have the SIG P365XL, which is my EDC. I was and am a Glock guy, but these two SIGs have swayed me. Thanks in advance for taking time to read this. Hope to see my SIG in an upcoming test. — David 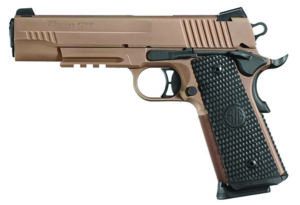 Hey David: Sure, we’re happy to look at the Scorpion down the road. I will float it to the staff and see who’s interested. — tw

Hey Todd, I recently found a Henry 410 for sale and snapped it up, and was wondering how it compared to the Winchester 9410. And then I thought, why not throw in the short-shooters, Shockwave, in the .410, and the Henry Axe, and anything else that may seem to apply to that type of category, whatever that is.

I have found that a light on the Henry 410 works wonders with the factory bottom rail, but that a light/laser is needed on a 410 Shockwave, and the only place to mount one is a factory top-rail accessory option, but finding zero wasn’t a problem.

Another comparison would be the dark series of lever actions, with the tried-and-true deer rifle, and other variations. Hell, why I’m on a roll, evaluate the threaded rifles to see how well they work with suppressors, including bolt actions, lever, and semiautomatic rifles.

I guess I better quit for now, thanks for the great publication. All in all, a great read, just too short. — Mike S.

Hey Mike: Thank you for the kind comments and article ideas. Contributing Editor Robert Sadowski is working on a feature with the Henry Axe, the Howdah Alaskan Pistol, and the Honcho Tactical Triple. The short-barrel shotshell-firing category continues to expand, and the .410 chamberings of those devices make them easier to handle. We tested the Winchester 9410 in the August 2012 issue, and I recall shooting the discontinued lever action. Loved it. They cost a lot used these days. — tw