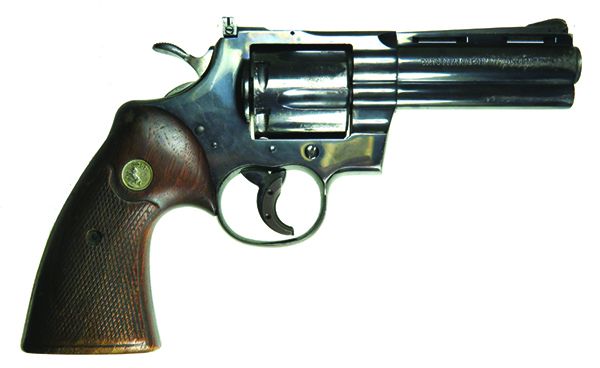 Our 1964 Python was used and sure looked like it. This revolver had been rode hard and put away wet, but we wouldn’t detract points for cosmetics unless function was somehow compromised. The Royal Blue finish was worn off in areas from holster wear. The backstrap had a patina on it. The checkered walnut grips showed use consistent with the blue finish. In hand, we liked the feel of the ’64. The grip felt full and rounded at the backstrap without feeling too large. We liked the way the grip also filled the area behind the trigger guard.

Though well used, this gun was still tight. The cylinder-to-forcing-cone gap measured 0.003 inches. And there was no wiggle in the cylinder. We preferred the checkered texture on the hammer over the new guns’ serrations. The trigger was fitted with a trigger shoe. A trigger shoe is a sleeve of metal machined to fit on the front face of the trigger that is wider than the original trigger and extends slightly more forward. They are held in place with two hex screws. The shoe allows the user to have more contact area on the trigger, with the finger making the trigger-pull weight feel a bit lighter. Our guess is the ‘64 was used as a competition gun. The shoe looks like it was manufactured by Tyler Mfg. (T-grips.com), which makes trigger shoes for revolvers, pistols, rifles, and shotguns. The double-action trigger pull was a smooth 11.5 pounds, though it felt less. In single action, the trigger pull was a nice 3.6 pounds.

This is a heavy revolver due to the full lug, and that’s a good thing for extended shooting because it absorbs recoil. It also makes carrying the revolver a chore, but the holsters and belts we chose made it easy to carry. The sharp corner on the barrel underlug could be felt dragging along the inside of the holster when reholstering the ’64.

The rear sight is adjustable for windage and elevation with indicator arrows. The front ramp sight was all black. We took a black Sharpie to the sharp edges on the rear sights to reduce glare. The black sights on black target can be difficult to see at times. The best accuracy we could squeeze out of this old snake at 25 yards was a five-shot group measuring 1.07 inches using Hornady Critical Defense 38 Special with 110-grain FTX bullets. Not bad for a well-used handgun. With 357 Magnum ammo, our best five-shot group measured 1.31 inches with Hornady Critical Defense loaded with a 125-grain FTX bullet. On average, groups averaged 1.75 inches. With 38 Special loads as well as 357 Magnums, the ’64 felt easy during recoil. We liked the rounded rear grip as it spread the force of the recoil in our palm. Shooting fast in DA mode, the ’64 shined. We liked the wide trigger shoe. We could stay on target easily and recover from recoil for fast follow-up shots.

We found the HKS, Safariland, and Pachmayr speedloaders hung up on the grip panel, causing the 357 Magnum cartridges to enter the chamber at an angle. The shorter 38 Special cartridges were marginally easier to load. The speedloaders also did not fully seat flush with the rear of the cylinder, so there was a gap between the speedloader and the cylinder. We could get the speedloaders to work, but they were anything but speedy, and because there wasn’t a flush fit, the cartridges closest to the grip could fall out of the speedloader and jiggle out of the chamber and onto the deck if we weren’t paying close attention. We found the Tuff speed loader to be the most effective on the ’64. Empties easily ejected and with no issues, though we did need a gravity assist to dump shells completely.

Our Team Said: Though the ’64 Python was well used and looked it, the wheelgun had good performance and accuracy. There was plenty of life in this old snake. Would we pay $1800 to $2000 for this revolver? Probably not.