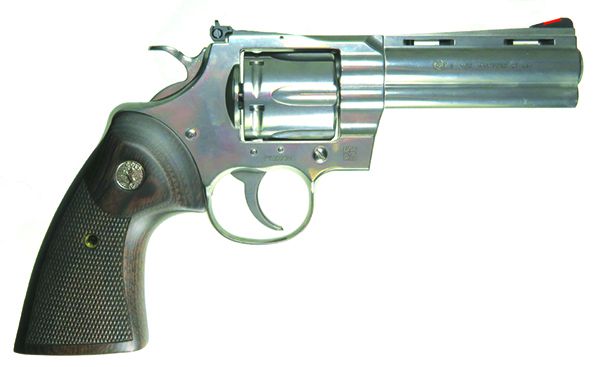 The new 4.25-inch-barrel Python comes in a hard plastic box with a lock and a packet sample of oil. We wish it came with an optional rubber grip. Originals had a 4-inch barrel, but to accommodate Canadian regulations, Colt opted for a 4.25-inch barrel in the 2020 model. In hand, the new Python has nice balance and a good grip. We fell in love immediately with the bright stainless finish, which is brilliant and easy to clean. The top side of the barrel has a matte-stainless finish. The full-lug barrel adds weight, and that translates into less felt recoil, even with the hot magnum loads.

The new two-piece grips are checkered laminated wood with an inset nickel Colt medallion. The grips look great, and they are thinner than the checkered walnut on the originals. Because the grips are thinner, they also transfer recoil, which is what we encountered with magnum loads. An old set of Pachmayr Presentation rubber grips fit, as do the Hogue and Pachmayr Gripper grips. We wonder if Colt will offer a more comfortable rubber grip in the future.

The curve of the trigger is different than on the ‘64, yet we still had plenty of leverage. It is also serrated. In DA, the pull measured 9 pounds, which was a pleasure. In our opinion, the trigger on the new Python is excellent and close to the original in quality. The U-shaped mainspring ensures a smooth press with no stacking. Coil-spring mainsprings produce stacking. As they compress, the coil spring increases the trigger pull weight toward the end of the stroke just before the hammer falls. This is called stacking. The elongated bolt-stop slots also ensure a smooth action because the cylinder stop does not drag against the cylinder. In SA, the trigger breaks crisp and clean with no take up and no mush. It averaged 6 pounds and was not as good as the originals, though we are nitpicking over a 2-pound difference. The hammer is finely serrated and offers good texture, but our Python-philes liked the checkered texture of the originals. 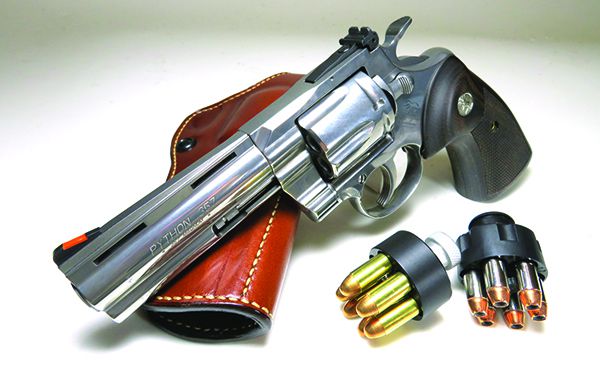 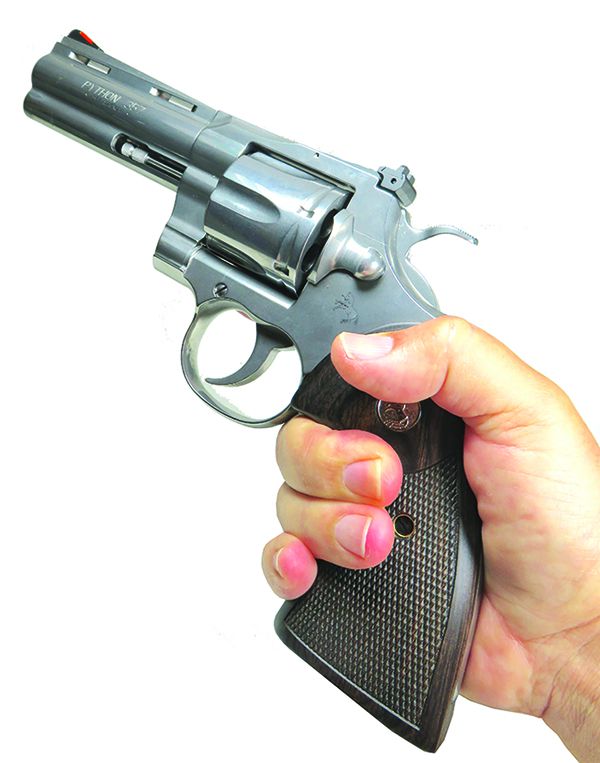 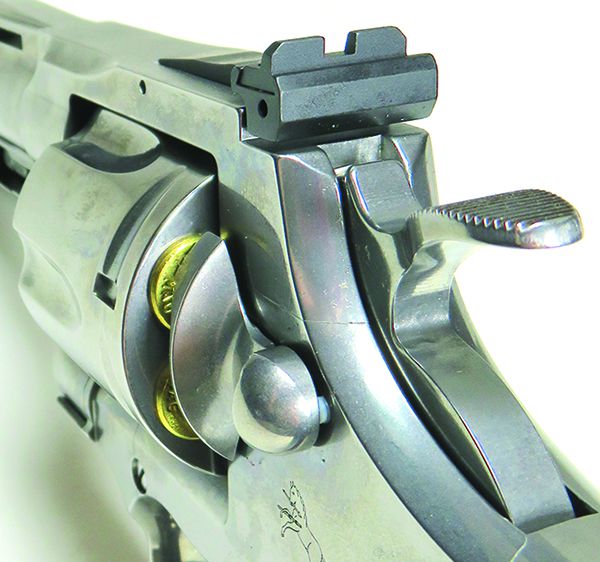 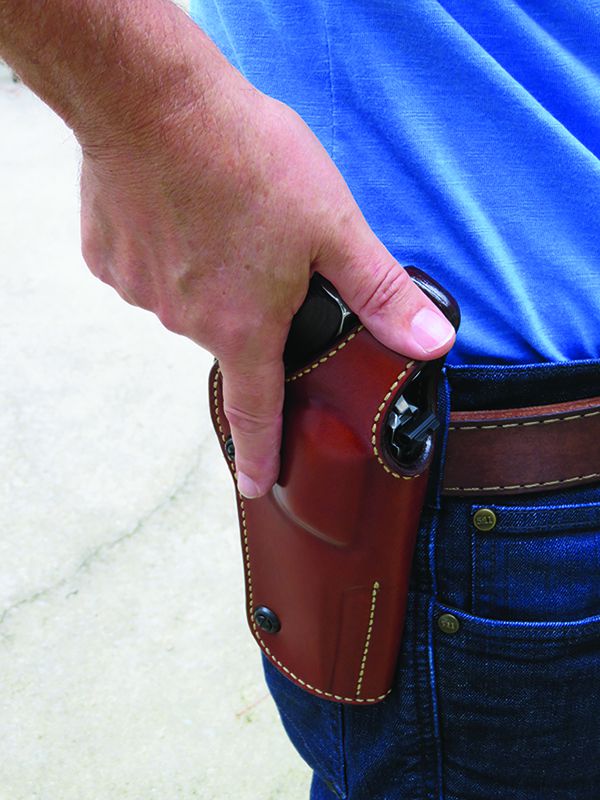 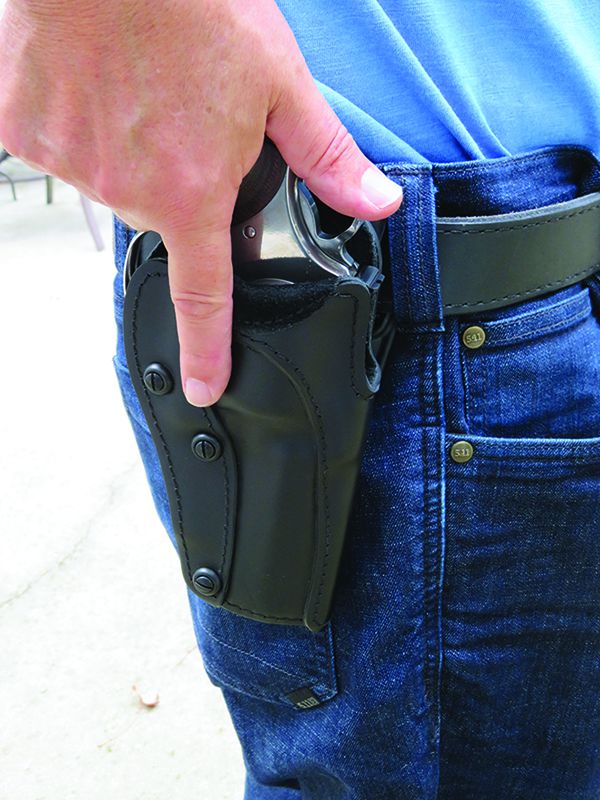 The ramp front sight has a red insert in it like revolvers did a few decades ago. We liked the contrast with the rear. The front sight is removed via a hex wrench and is easily replaceable. We liked this set up. The rear sight is fully adjustable for windage and elevation, though there is no indicator for left/right or up/down. To adjust windage, use a hex wrench to loosen the windage lock screw and then turn the windage screw clockwise to move point of impact left; counterclockwise to move right. After adjustment, tighten the windage lock screw with the hex wrench. To adjust elevation, screw clockwise to lower the point of impact or counterclockwise to raise. We would have liked adjustment indicators on the rear sight. Though the finish was matte, we would have also liked the rear sight face serrated to reduce glare.

The sharp edge of the underlug dragged inside the holster when reholstering, but you would not notice wear on the sharp edges because the revolver is stainless. We would not hesitate to conceal-carry the new Python, just remember to use a sturdy belt because it weighs 42.9 ounces loaded. The new Python and the Galco Phoenix holster make a nice daily rig. It’s not a fancy BBQ rig, but it is still stylish.

With magnum loads, we felt recoil with the 4.25-inch-barrel model more than with the 6-inch pistol. The rear grip has an edge, not rounded like the original grip, and that pounded the palm during recoil. With 38 Specials, it is a non-issue, but after a few full cylinders of 357 Mag ammo, you feel fatigue. This is when we swapped out the factory grip for the rubber Pachmayr grips, which increased shooting comfort. We’ve already suggested Colt create a rubber grip, and we hope they listen.

The new Python shot circles around the ’64 with a best 25-yard, five-shot group of 0.5 inches with Winchester Defend 357 Magnum loaded with 110-grain JHP bullets. Average accuracy with that ammo was 0.7 inches. Nice! All magnum ammo averaged just over 1 inch. This is a shooter for sure. With 38 Special ammo, it averaged 1.6 inches with Blazer +P ammo and 1.2 inches with Hornady Critical Defense. We also noted the new Python had more velocity than the ’64.

Our Team Said: The cost is pricey, but the new Python is a winner even if it isn’t an exact clone of the original Python. It has a smooth DA trigger that is superb and offers excellent accuracy. You may want to buy aftermarket grips depending on the size of your hand and aversion to recoil. Sights were adequate, our shooters said.