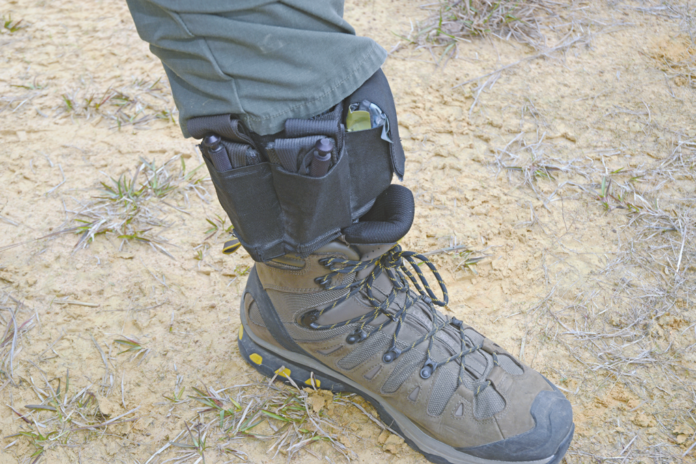 I’ve worn the Rescue Essentials medical ankle holster for at least 6 to 7 years on duty, in uniform. No issues at all with retention in all environments. My duty boot keeps it from slipping down, and my calf keeps it from riding up. No need for a calf-retention strap like some gun ankle holsters with the boots on. I find it a great option to carry most of the needed equipment in an inconspicuous location.

The contents have changed over time. Now, I keep extra Nar-Can in there as well (being held close to the body, it keeps the spray from freezing in winter). I’ve found the CAT-T to be too bulky, and, instead, carry one on my duty belt in a specifically designed holster. The SWAT-T in this holster is much flatter and can serve as a pressure-bandage wrap, tie a door shut/open, or a million other things. With the molle, I’m able to clip on a blunt-tip knife. An additional benefit to this kit is that with everything secure, I can take it off and toss to someone in a hot zone.

I built my own kit rather than the pre-packaged one. This is not a “carry everything” med kit; it won’t accept a CAT-T or chest seals. Being next to your ankle, it gets exposed to some heat/cold, sweat, etc. But it is excellent for duty or off-duty wear as well. I encourage all my officers to explore this option, as a bulky IFAK on a duty belt just doesn’t work, and only so much can fit in a flat packet in a side cargo uniform pocket.

One issue I have had is that it does tend to catch/pull on the inside of the pants. I’ve tried to cover the exposed “hook” side, but it still seems to catch. It’s not a big deal with uniform pants because the kit is higher up, but in a suit it might ruin the material if not addressed. Likewise, it can print pretty easily and appear to be a ankle (gun) holster unless the pant material is not thin and not slim fitting. Fine under jeans, regular cargo pants, and so on, but it does print through thin suit material.

Despite that, I try to wear this anytime I’m carrying a firearm — just makes sense. Especially as a police officer, if I have to discharge a firearm, I’m legally required to render aid if possible. I do not want to risk not having the proper equipment available when an ankle holster such as this makes it very practical to do. — Crush

Seeing how many of today’s great law-enforcement officers and emergency responders are starting to wear trauma kits, it would have been nice for the article to have addressed:

l Can a garter belt, worn just below the knee, be attached to the kit so that one could adjust the height of the kit?

l How the ankle trauma kit would ride if one needs to run and/or after getting into a struggle/fight, as so many police officers will face during a shift.

l Also, can the kit be worn higher above the ankle so when one sits it doesn’t expose the kit for everyone to see? — fxdwg_98

I highly recommend the Armed Citizens Legal Defense Network (www.armedcitizensnetwork.org). It is not conventional insurance, but it will actually be worth more if you are actually arrested. An insurance policy always has limits and conditions, but with ACLDN, you will be in control of selecting your representation. Massad Ayoob is a director. Check them out at their website.

If, as the writer [Michele Byington] suggests, juries may consider anyone — even if he or she carries legally — as someone who wants to hurt or kill someone else, perhaps the juries don’t understand that the burden of proof lies with the prosecutor. The accused is innocent until proven guilty, not the other way around. So, it is incumbent upon the judge and the defense attorney to impress that fact upon the jury, perhaps again and again. It shouldn’t matter (although it does) how the jury feels about someone who carries a gun for self-defense; the only thing that matters is what the prosecution can prove.

Having said (all) that, I have to agree with others who have stated that it would be nice if Gun Tests could rate the different insurance plans for us. Even though Gun Tests readers are intelligent and well-read, that doesn’t mean that we understand “legalese.” — Crash

Many states (such as Washington, where I live) have pretty much outlawed these insurance plans. I had NRA Carry-Guard here, but now that is gone, and I am not sure if there are any others licensed to provide this service here. — GW

There is a good comparison chart of plans on the Concealed Carry website. There is, also, a short video that is selling a DVD course comparing various plans. The chart seemed sufficient to me, but thought I should mention that there was a sales pitch attached. You can use the chart without getting the DVD. —McGeezer

I have heard the requests for Gun Tests to compare the various self-defense plans out there, and I haven’t come up with a suitable way to get that done because the legal terms are so specific, and so local, and so variable (such as coverages being outlawed in the anti-gun-rights states) that I’ve shied away from it. And the recent troubles at NRA are a big part of that. Because NRA’s internecine battles are not over, I worry about Carry Guard’s viability.

You believed something published by CNN?— Mitchrapp3356

No, normally not. But a stopped clock (analog) is right twice a day. — tw

Who would buy one? Obviously about 2900+ someones who must be able to spend hundreds of dollars on ammo to spray all over their private range. No public range would allow it. But because Glock made a model that is full auto, some people gotta have it — legal, illegal, they don’t care. And you would be surprised at who those people are! — Fatboy46

Maybe this is a way to promote Darwinism among gang members. BATFE will follow the paper trail. Kick a few doors in. If you buy one of these full-auto Glock parts, chances are you are too stupid to own a handgun anyway.— x211sam

I trust you, not CNN. I know that any semi-auto can be modified to full auto, some with just a file. Will CNN support stiff sentences for those possessing a modified Glock? — Leon

I wouldn’t change a thing on my Glocks. They are perfect the way they came. Glock Perfection — Vin

Why would anyone install a Chinese part into such a fine piece of machinery as a Glock in the first place? I am marking today’s date, and I will check back in a year from now to see exactly how many Glock Machine Gun Pistol Shootings have occurred in the U.S. — Treborsh

Oh, no. ATF fearmongering about something that is a nothingburger. I have no interest in a machine pistol, regular pistols are fine for me. The pro criminals who are technically minded enough to do this kind of mod are few and far between. If there’s a sudden uptick in Glock 18 machine pistol shootings, I’ll eat my words, but this is garbage. But yeah, don’t buy one. — Joe

I carried nothing but leather for years. However, I found myself needing an IWB holster in my four-season climate. As mentioned in your article, flexibility is the primary requirement for me. Like many others, I gave the Kydex material a try because it supposedly didn’t have the issues we leather-carriers griped about for years. You know, absorbing liquid after a 14-hour day on our sides and the effect the guns’ oils had on our hides and clothes and the effect sweat has on our guns’ finishes. It all sounds great until we discover what they didn’t say. Like the advanced rate of wear and tear on our weapons’ finish. The way Kydex cracks under rough handling or repeated use, making a Kydex holster’s lifespan less than half the lifespan of quality gun leather. The Wright Leather Works Cobra, noted in your article, is exactly what I’m looking for, but was having trouble finding. Thanks for this article that covered an ever-widening selection of products. Reading your article has saved me a good deal of money and at least another layer of duds in the “not quite good enough” used-holster box in my work room. — Stahley

I have been reloading since I was 19 and now I’m 77. RCBS products are some of the best. I have the RCBS Chargemaster and use it almost daily. It is the best I have ever used, and at one time or the other, I have had most of the products available. — Texasbil

What is the point of using one of these scales if you’re going to drop short charges and trickle up? You can do the same thing with a much cheaper mechanical powder measure, a scale, and a trickler.— Bnystrom

I have the Hornady scale. The overage problem you observed is very powder dependent. H4895, a long-stick powder, generated consistent overages. It did much better with N165. I believe that the overage problem is caused by clumping of the powder in the drop tube. I was able to mitigate the problem by inserting a short length of soda straw (now banned in California) into the tube, then cut a notch out of the side that sticks into machine to allow powder to enter the straw. This reduces the feed rate and for me resulted in far fewer overages. The Hornady unit is easy to clean. Also, wipe the interior with a dryer fabric softener tissue to reduce static cling on the sides of the hopper.— Friar Tuck

Thanks for sharing those ideas. Say hello to Robin for me. — tw

I just received my first copy of Gun Tests. I really enjoyed the review of the Glock 48 and the new Mossberg. I was wondering if you folks are going to test the new Springfield 911 in 9mm? I’m very interested in buying that pistol. I’m a retired peace officer. — Mario

I am truly glad the imaginary Baby Rock is #1 on the list of 380 ACP-chambered handguns. Having looked high and low for one since 2016, I myself would have named the Starfleet phaser a better weapon of choice, since neither one exists. — May5183

Go through the Armscor website at armscor.com/firearms/bbr-series/baby-rock-380/ and click the “Buy U.S. Now” button. Also, I did a web search that included the model number and got quite a few hits. BudsGunShop.com, which we cite regularly, has them in stock for $355. — tw