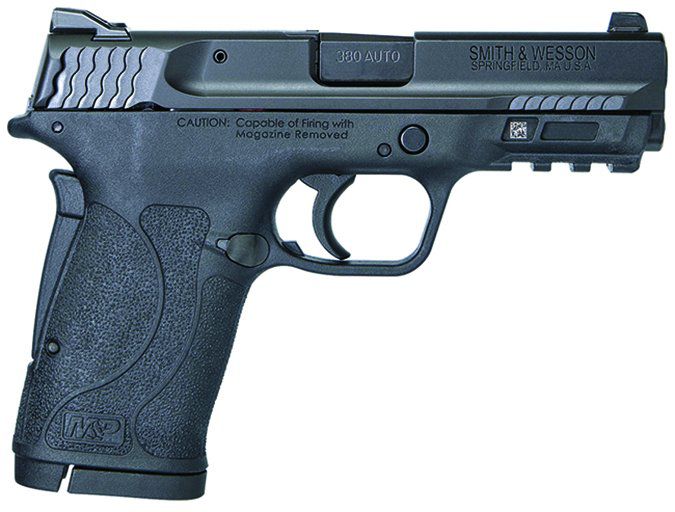 Jackpot! You reviewed and gave an “A” grade to two guns that I am very interested in. First is the S&W M&P 380 Shield EZ. I am an NRA instructor and we are constantly faced with the problem of recommending a semi-auto gun for women and older students who have trouble loading the magazine, racking the slide, and handling recoil. I have felt that the S&W Shield EZ would be perfect for them, but haven’t had a chance to fire one. Your review solves that — I now feel that I can recommend it with confidence.

I am also interested in the Springfield Armory 911 as pocket-carry gun, and your review was very helpful. I do have a question about the slide-racking effort. On page 8, you mention that the Shield requires about 9 pounds effort and the 911 requires 9.7 pounds. Is this a typo, or does the 911 really have a racking effort that is that low? Thanks for the good reviews, they are really helpful! — Ed

Hey Ed: Yep, Bob Campbell confirms that the slide-retraction effort for the 911 was 9.7 pounds. It does seem like S&W has listened to what the market was asking for when the company made the Shield EZ. — Todd Woodard

Sirs, I enjoyed your July 2018 article on caliber conversion pistols. I figured this idea out early enough to have saved myself a fair amount of money. I have taken it one step further than you, by adding an additional caliber into the mix. My choice of a host gun is the Glock 23, as I prefer the compact size. For well under $400, less than one new Glock, I have the flexibility of having a conversion barrel for 9mm (G19) with a few mags, and for 357 SIG (G32), which is my favorite. As a bonus, the G23 40-cal mags will work fine with the 357 SIG rounds, negating the need to purchase additional magazines (though G32 mags are cheap and plentiful). Some folks have commented to me that I should consider using different recoil springs, but I have had no issues with the springs in any of my setups.

I prefer to shoot suppressed, and have purchased my barrels threaded. Regarding the point of impact issues you describe, yes, it does happen, but it is minimal. However, with a mini RDC (red dot) mounted, I can zero in each caliber selection within minutes. When you consider many Glock owners like me have made large investments in aftermarket trigger groups, sights, and other internals like titanium recoil springs, safety plungers, firing pins, and such, it would cost a small fortune over and above the base cost of the additional two pistols to outfit the additional pistols to my liking. I figure I have about $1400 invested, and have essentially three custom Glocks in three of my favorite calibers, and with the money I saved, I bought an AAC Tirant 45 can and a few additional thread-pattern pistons for flexibility! Beat that! — Bill

That sounds like a super Glock set-up. We can’t beat that! — tw

I was reading the test between the Model 100 30-30 Ted Williams. I really liked your findings since I happen to own a Ted Williams Model. I traded with a friend of mine probably around 20 years ago. I absolutely will not ever sell or trade this beautiful piece of workmanship. The only problem I have with it is, my friend sort of neglected the preventative maintenance on this rifle, a bit of surface rust started on it. Not much, but to me not much is too much! I’ve taken very good care of this rifle, and there’s only one thing I would like to change about it. That would be the sights on it. My eyes aren’t what they used to be, but also I was never really happy with the rear sight, they seemed a flimsy to me. When I first got this rifle, the sight had been bent just a bit and I changed it. Well, the wedge part of it was just too loose for my liking, so I want to change it to an adjustable rear. Otherwise, this is a great rifle. Thanks for highlighting it. — Stephen

Hello, gentlemen. It seems that the rush toward simplifying suppressor access has cooled considerably. I believe that making them commonly available, like normal firearms sales, will result in their appearance in the frequent inner-city street shootings we see every day in the news. This will only hurt the legitimate firearms trade and hobby. Also, as I reflect on the late ammo shortage surrounding the Obama/Clinton presidential runs, it becomes obvious that every entity involved in the manufacture, wholesaling, transportation, and storage of ammunition purposefully held it off the retail market in order to “cash in” when ammo became worth three times what it normally would be sold for. I’m not saying a conspiracy, just the normal ebb and flow involved in marketing. Did anyone notice that shotgun ammo was immune to the “shortage?” Since the political roiling mentioned, even more good ammo factories have been established in the U.S., but when the political pendulum swings to the left again, as it always must, there will be yet again another ‘gun-n-ammo’ panic driven by fears of super-regulation. Thanks for your excellent publication; I look forward to it each month in print. — Art

You may be right on both counts Art, but we take the opposite sides. Even if suppressors become less regulated, they’ll still be expensive, and expensive guns aren’t being used in Chicago every weekend. Perhaps if prices came down and suppressors were less regulated, that might be enough to commodify their use in crime. And on the periodic ammo shortages of the recent past, we believe they were demand generated, not consciously supply constricted. Folks got spooked by what national-level politicians were saying about gun bans, and they decided the time to buy was right then, rather than wait for the ban-hammer to fall and real restrictions get put into place on rifles and pistols. Classic panic buying, with the resulting supply problems meeting the demand spike, in our opinion. But we will likely never know in either case. — tw

I read the manual through and through and saw where it said to start it up 15 to 20 minutes before using it and that’s what I do each time. You don’t have to do that with the Chargemaster Combo, but start-up time is not an issue with me. I was working up loads for several different-caliber revolvers in a three-week period. I used different powders, some light and some heavier. One example I was loading was Trail Boss 6.8 grains. Every charge took 1 minute and 25 to 35 seconds. That is unacceptable!

I told the RCBS tech about the slow-trickle issue that I’ve experienced and about the online reviews. The RCBS tech said the reviews were all correct. He said to manufacture the Chargemaster Lite at a more affordable price, they had to make the trickle speeds slower.

I have been for years and am still are impressed with Gun Tests. When I’m ready to purchase any firearm or a related firearm product, I look for those items in my saved issues of Gun Tests. If I can’t find the item in the back issues I have, I go online to your website and search for it there. I recommend Gun Tests to all of my shooting friends. — Pete in Charlotte, N.C.

How About Hearing Protection

Sir, I will start this out as many of your other subscribers do, by saying that I really enjoy your magazine. I find the articles very helpful in guiding me through an informative purchase. Now here it comes; I would like to suggest that you review Electronic Ear Muffs. (I can hear the moans). Before we get started, I searched the archives and I found an article on the subject in the October 2002 publication; however, and I know it was my failure, I could not print out the article.

The renewed interest by every organization to bring new people into the firearms fraternity, be it self-defense, recreational, target shooting, or hunting, we all know that safety is of major concern and is the first issue addressed by any instructor. Given the fact that the article is almost 15 years old and today’s equipment has made so many advancements, I would like to suggest that the topic of ear protection be looked at again.

I would further like to ask that while evaluating the devices, that you somehow rate them for use with handguns, long guns, and diverse types of hats. Ball caps, brimmed hats, hats with neck protection, etc. It is sometimes difficult to use muffs while wearing head gear or a rifle/shotgun versus a handgun. I know I am pushing it, but I would greatly appreciate it. Maybe you could combine the muff test with a firearms evaluation session. I do enjoy your magazine and articles, keep up the magnificent work. — Dean

Hey Dean, no problem with the ask. It has been a long time since we visited the topic of hearing protection, and we all need and should use it. So I’ll start researching it and see what we can come up with. — tw