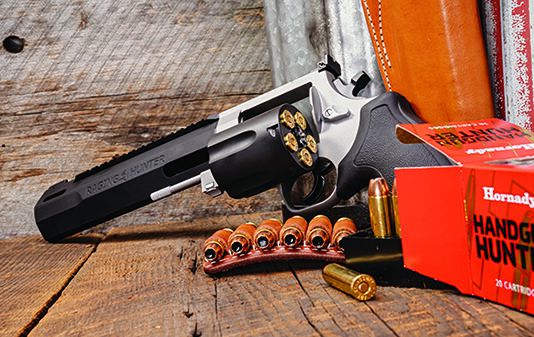 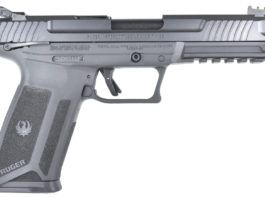 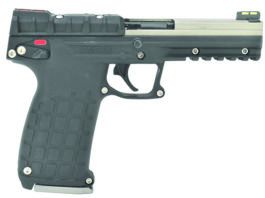 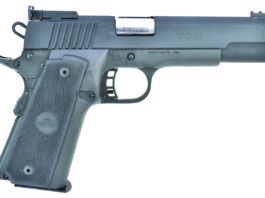 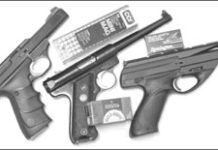 Pistols22 estaff - March 4, 2008
Acquiring a good semiautomatic .22 LR pistol is probably the best way to learn how to shoot a handgun. Some of us went that way (see sidebar) and highly recommend the technique. But not just any gun will do. It has to have some weight, excellent sights, reasonable to excellent accuracy, and a decent trigger. Why weight? There are some nice but very light .22s out there, and the new shooter wont be able to hold them as steadily as a gun with a bit more weight, and may become discouraged.So for this test of three .22 LR auto pistols, we selected three full-size examples. They were the newest version of Rugers Standard, now called the Mark III, with 6-inch barrel ($342), the Beretta U22 Neos with 4.5-inch tube ($250), and the Browning Buck Mark in its Standard URX version with 4-inch barrel ($380). All had ten-round magazines, good sights and decent triggers, and all were hand-filling, good-size guns. Two had adjustable sights. Two came with two magazines. In light of some extremely cold Idaho weather we chose to test with three types of ammunition only. It was Remington Yellow Jacket truncated-cone HP, CCI Mini Mag HP, and Federal Premium Gold Medal target ammunition. How did the guns stack up? Lets take a look. 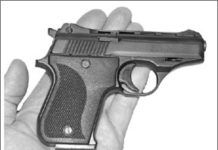 Three .22 Autos for the Trail: Phoenixs HP22A Earns an A+

Pistols22 estaff - May 16, 2007
How much does it cost to get a decent .22 "plinker," or whatever youd like to call a .22 pistol for shooting fun in camp or on the trail? Can you get one for under $150? Or will you have to spend many hundreds of dollars? The answers may depend on your proposed use for the gun, but if we limit the use to simply having low-cost fun with a semiauto handgun, the ground has been laid for our current test.We came across a low-cost pistol at a local gun store, the Phoenix HP22A ($140 locally) and could not believe it would be any kind of performer, our opinion being based largely on its extremely low price. We had on hand a more costly pistol by a top maker, Berettas Cheetah Model 87, with a price tag ($675) well over four times the cost of the Phoenix. Both pistols seemed intended for casual shooting. They were certainly not target pistols, and too small for serious self defense. We decided to try these two against each other, and then threw in a recently made High Standard Sport King ($695).Our impression of the Sport King was that although it was larger than the Beretta and much larger than the Phoenix, it seemed to be designed for the same casual uses of the other two, with its fixed sights and Parkerized finish. Its cost indicated it ought to do a pretty good job of busting apart yonder tin can. Heres what we found. 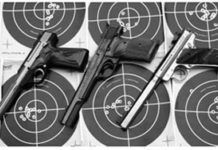 Pistols22 estaff - October 8, 2006
Smallbore bullseye competition shooting requires a steady hand, top-notch trigger control, focus-and an accurate gun that functions consistently. We pitted two updated newcomers that are safely out of the plinking class based on their price and model names-Rugers Mark III Competition (KMKIII678GC, $555) and Brownings Buck Mark Bullseye Target Stainless (No. 051426490, $643)-against Smith & Wessons venerable Model 41 (No. 130512, $1,115) to settle two questions. First, could the two more economical brands offer something to shooters looking to become serious in the sport?; and second, does the S&W still have the performance its historically been known for? The answers to both parts were yes, but we were so disappointed in several aspects of all three pistols that we cant justify more than a conditional buy on any of them.We shot all three from the MTM bench and Caldwells On Target pistol rest (both from Midway USA), first at 15 yards and then at 25 yards, both slow fire and rapid fire. We used four different brands of ammunition, mostly because .22s are notorious for favoring one brand over another when it comes to accuracy, and sometimes functionality. They included Federals Champion AutoMatch, a 40-grain lead solid point; Remingtons brass-plated hollowpoints; CCIs Mini-Mag Standard Velocity; and Remingtons Eley Match EPS, with its heavily lubed, flat-nosed 40-grain lead bullet. With one single exception, each fired flawlessly at all times, and some fairly decent groups were had by all three, though our testers are not competitive bullseye shooters. Trigger pull was measured with an RCBS trigger-pull scale, also supplied by Midway USA. Heres what we found. 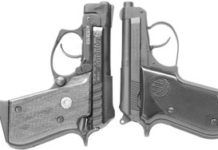 There are a few clever innovations in handguns that have specific usefulness to certain groups of individuals. One of these is the pop-up barrel that permits loading one round into the chamber of semiautomatic pistols without the need for weak or possibly arthritic hands to work a slide. This feature has been mighty handy over the years for a few folks, to our certain knowledge. We found two modern .22 LR pistols with this feature and decided to see just how well they worked in the field, and against each other on the target.

They were Beretta's Model 21A Bobcat, $250; and Taurus' PT-22, Model 22B, $227, both chambered for .22 LR. The mechanisms were a bit different, the Beretta being DA for the first shot and SA thereafter for all 7+1 shots, and the Taurus being DAO for all its 8+1 shots. But we thought they were within a nickel of each other for overall size and usefulness. Each gun came with just one magazine. Neither gun had an extractor, nor did they need one. With the open-top design, spent cases had lots of room to get out, and all fired rounds from both pistols ejected perfectly, as it turned out.

Either pistol could be carried in the pocket, and it seems to us that's the service for which they're designed. Our general feelings are that a .22 LR would not be our first choice for serious back-up work, but hey, any gun sometimes is much better than nothing at all.

We won't recommend any specific usage for these tiny pistols. We'll leave that up the individual; but if you own one of these you should expect to be able to shoot it inexpensively, hit your target, and have some fun with it. In that vein, we thought either gun could be used easily and well as a single-loader for training purposes. Let's see what else we found out about them: 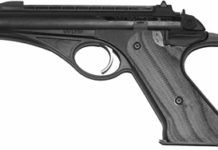 A Brace of Full-Size .22 Autos: We Would Buy The Wolverine

Need a full-size .22 pistol? We've looked at smaller pistols and revolvers recently, but some want or need a larger .22 pistol, for whatever reasons. Happy to oblige, we grabbed two pistols that we thought would fill the hands better than anything smaller, and put them against each other in the hands of our test team. The pistols were the Whitney Wolverine ($280), Olympic Arms' remake of the Space-Age-looking older design which used to have an aluminum frame; and SIG's Mosquito ($390), a close copy of that company's larger pistols, with similar shape and finish but made somewhat smaller overall. The Wolverine was much lighter than the Mosquito, and it had a grip shape that not everyone will like. The Mosquito, which felt great in most hands, cost a bunch more. Was it worth it? Let's see what we found. 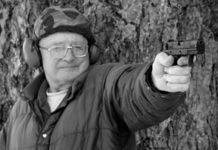 Four .22s for Fun and Practice: We Praise One Walther P22

The quest for a small .22 LR handgun can take one to strange places. The first place one might look is in the catalogs of today's makers, but your first surprise will be that there are not all that many small .22 LR autoloader handguns available. There are plenty of ‘em about the size of a 1911, but it seems the fine small autos of the past are almost gone. Walther offers the fine P22 in two barrel lengths. We looked hard at the longer-barrel version in January 2003, but the shorter version was something of a mystery. Both of these new Walthers had parallels in the older PP Walther, with short barrel and fixed sights, and in the adjustable-sighted, longer-barreled Walther PP Sport. We obtained both the long- and short-barrel P22 (MSRP $301 for either one) along with a copy of the all-steel Walther PP, offered recently by Southern Ohio Gun ($500). Luck was with us, because a staff member happened to own one of the fairly rare Walther PP Sports (about $1100), and made it available for testing. We put them to the test, and this is what we found. 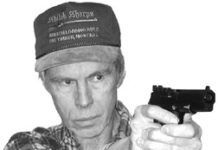 Kimber's Rimfire Target and .22 conversions by Ciener and Marvel provide three ways to save money and have fun by shooting .22 LRs in 1911 frames. 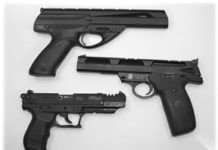 Nearly equal on paper, these three rimfire pistols have very different personalities. Which one is the right pick for you? 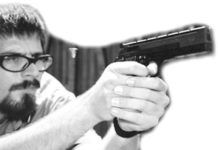 As the sport of competitive shooting progresses, the latest trend does not always supplant or erase what came before it. In terms of smallbore pistol competition, Bullseye, one of the oldest forms of competition, is still alive and well despite the increasing popularity of rimfire practical shooting sports such as those fostered by the USPSA. But with new games comes changes in equipment.

Somehow believing the gun in their hand will instantly transform them into masters of the sport, far too many plunge into bullseye shooting by making an major, initial expenditure. This error is often compounded by making that investment in a caliber never intended to, and generally incapable of, deliver 10 rounds to the 10-ring at 50 yards. Were thinking specifically of the 9mm. Another foible is to spend the big bucks going in, then deciding you dont cotton all that much to paper-bu...

The concept of a pocket pistol in .22 Long Rifle (LR) makes us wonder to what purpose it might be put. Certainly it is not anywhere near ideal for self-defense, though it beats having no gun at all. They're not known for being target punchers, either.

But, these small autoloaders are lots more fun than the bigger guns, especially because the bigger, heavier guns will be more likely to be left home. Perhaps such a gun is the ideal choice for a fisherman who wants a popgun for dispatching big pike or small muskies, or for puncturing empty cans in camp. The hiker, burdened by a pack, tent and bedding, might be able to find a small bit of room for a pocket .22 LR semiautomatic with its light...