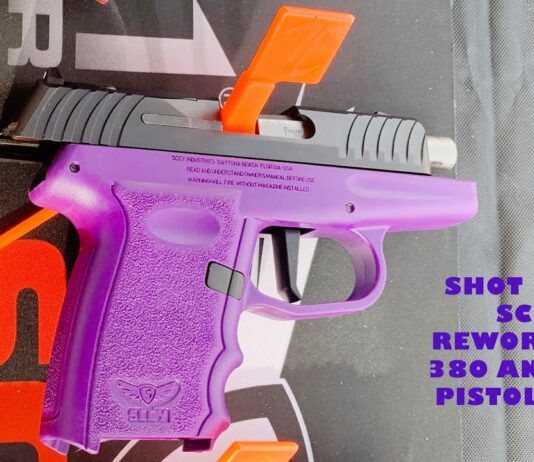 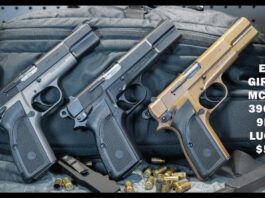 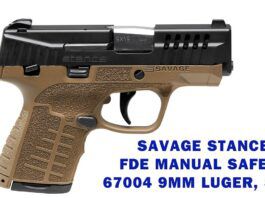 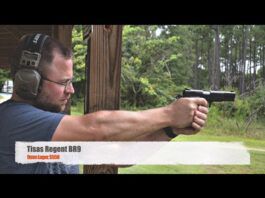 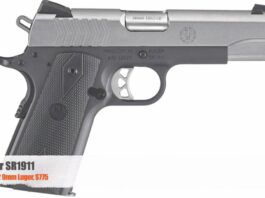 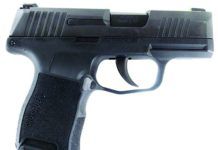 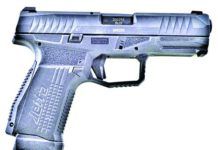 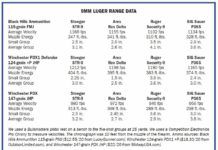 Finally, we get a SIG Sauer P365 to the range, and it's okay. Just okay? Yeah. The others were the Stoeger STR-9, Arex Rex Delta, and Ruger Security-9, one of which we consider to be a better buy. 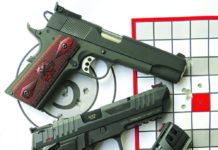 All three handguns offer great accuracy, good triggers, and manageable recoil. Choosing between them will be the customer's task because each one has positives suitable for different games. 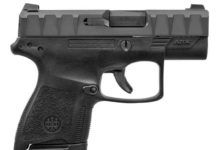 The brand-new Bond Arms Bullpup handgun design takes on two veterans of the carry wars, the APX Carry from Beretta and a spiffed-up LC9s from Ruger. We found two really good compact choices.

Pistols9 Todd Woodard - June 19, 2019
The growth of the concealable 9mm Luger handgun market continues to grow apace, with seemingly dozens of new models being introduced every year from...

Our Pick as a personal-defense, home-

The Gen5 guns are the best yet, with superior accuracy and features over earlier Glocks. 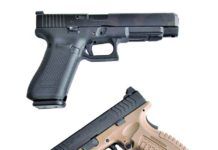 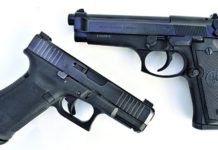 To replace the Beretta M9A1 (M9) and later variants in military service, the U.S. Army tested several handguns and chose the SIG P320, which is designated as the M17 in military service. The Glock 19X was also a participant in the military trials. While not chosen by the military, the full-size-grip short-slide Glock has enjoyed commercial success. The new Glock 45 is a direct result of Glock's experience in the military trials and also a result of criticism of the 19X. A third handgun, Beretta's APX, was also not adopted, and like the M17, is a modular design. We elected to test these three striker-fired polymer handguns head to head to determine which might be the best choice for concealed carry and personal defense for civilians. To add some historical texture, we also shot these firearms side by side with a full-size Beretta 92, or the M9 in its military appellation. The Beretta won't carry as easily as the APX and Glock, but it's comparable to the P320-M17 in size. If we're looking at them as home-defense guns, then size is less of an issue.

As we collected data and choose firearms for inclusion in these shoot-outs, we met old-line shooters and even young shooters who feel that the polymer-frame striker-fired market is crowded, and these handguns are much the same. Nothing could be further from the truth. Beretta, CZ, HK, SIG, Smith & Wesson, and Glock offer different features and different fits and feel for their products. Those who have not tested the pistols extensively and who have not taken time to compare features may feel these pistols are cut from the same cloth, but by assuming that, those shooters abrogate a lot of responsibility in choosing the handgun that suits them best.

Close in importance to the most basic needs - food, water, and shelter - is the ability to protect yourself from threats. Concealable, compact, and powerful handguns give us peace of mind in a dangerous world. There is no doubt there are more effective cartridges than the 9mm Luger, but the 9mm is far more powerful than any 32 ACP or 380 Auto cartridge, and it holds more rounds than a compact 38 Special revolver. The 9mm is a powerful cartridge with good performance that will get the job done, given adequate shot placement. A compact handgun with good sights, a decent trigger, and ergonomic controls is a stalwart companion in difficult times. So we tested a quintet side by side to get an idea about what we would buy, then relay those impressions to Gun Tests readers. The pistols tested are unique in many ways, but they share a few common features. Takedown, trigger action, and slide-lock designs differ. Each may fit your needs more than the others, but there are a couple at the top of the heap. Our test handguns chambered in 9mm Luger were the following.

We recently published a news item that updates our readers on legal troubles the SIG Sauer P320 is encountering. Most recently, the Loudoun Times-Mirror website is reporting that a Loudoun County (Virginia) deputy has filed a lawsuit against SIG Sauer alleging that her fully-holstered P320 duty weapon discharged and sent a bullet into her leg. According to the newspaper's account, the incident occurred this year on Feb. 7, "… when 37-year-old Loudoun County Deputy Marcie Vadnais went to the Northern Virginia Criminal Justice Academy to attend a general instructor course." The Times-Mirror further reported, "In accordance with academy policy, Deputy Vadnais began removing her firearm from her belt when she arrived." According to the lawsuit, as she fed the belt through the holster's first tooth, her SIG Sauer P320 somehow "fired one nine millimeter bullet, which hit her in the upper right thigh." 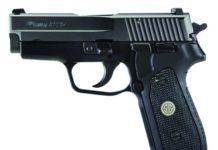 The most popular concealed-carry and home-defense handgun in America is likely the 9mm self loader. There are service grade and service-size pistols, compacts, and subcompacts available in this chambering, which has gained popularity because of improved bullet function. In this installment, we are firing purpose-designed compact handguns that are derived from service-size handguns. When the Glock 19X was introduced, with its Glock 17 grip and Glock 19 slide, our shooters knew it would be a hot new gun to test, but we did not quite know what to match against it. The editor dubbed it a Commander-size Glock 9mm, so we found a 9mm 1911 Commander to brace against it — the Ruger SR1911 Commander. The SR1911 Commander is, after all, a full-size Government Model pistol with the slide shortened three-quarters of an inch. The Glock 19X is a Glock 17 with a short slide and full-size grip. Bingo.

European compacts generally have both the slide and the butt shortened. One example is the SIG P225A, a short version of the SIG P220 9mm handgun. Today, SIG offers an updated and revamped P225-A1. We added this double-action-first-shot pistol as a counterpoint to the double-action-only and single-action pistols tested. Next, we added a true compact with both a short slide and short frame, the Smith & Wesson M&P9 Compact M2.0. It seemed fitting to match the M2.0 M&P9 against the Glock 19X Gen5 gun.