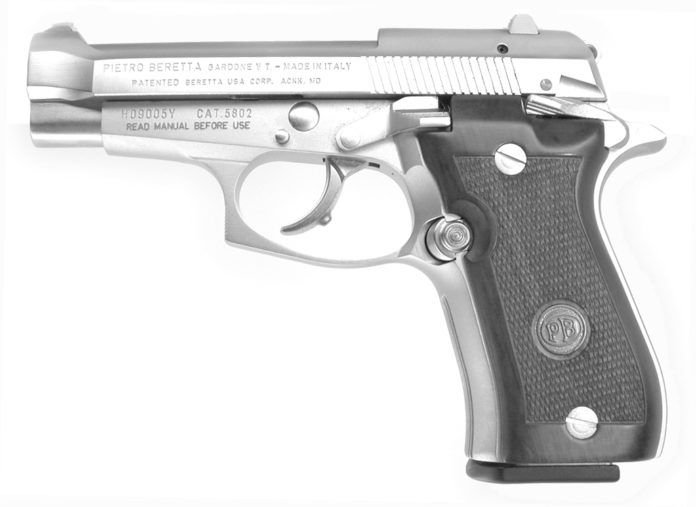 Smaller guns have always had a certain appeal. In some cases it was just the aspect of miniaturization that captures our imagination. In other cases it was the reassurance of a highly concealable weapon. One niche of such guns were semi-auto .380s, which have long been popular sidearms because of their flat, short footprint and sufficient, if not outstanding, power.

Even in the small world of 9mm Shorts there is a pecking order in terms of size, with the Beretta 84LS being one of the largest.

This would account for the most sight radius, barrel length, the most generous grip area, and the highest capacity, (10+1). This model line starts with an MSRP of $576 for a blue finish with plastic grips, but ours cost $652 with wood grips and nickel finish. We bought ours at Fountain Firearms in Houston, TX.

The finish had a burnished hue that matched the beautifully checkered grips. The classic “PB” (Pietro Beretta) insignia was inlayed on the left grip panel. Appearance and handling may appear to be identical to the 92 and 96 series Beretta pistols, but the Cheetah operated by a blowback system rather than locked breech. But what was most important was that there were no malfunctions of any kind.

The frame was an alloy that made a plastic-like click when we tapped it with a fingernail, but the top end was steel. While the 84LS weighed the most of our quartet of pistols at 25 ounces, this was only 3 ounces more than the considerably smaller North American Arms Guardian. The Cheetah 84LS was completely devoid of any sharp edges, and even with a top end busy with a variety of levers, we found holstering and presentation to be snag free. The safety and decocking levers were blended into the profile and did not interfere with racking the slide. Rear cocking serrations were plentiful.

The two supplied magazines matched the frame and offered two windows for checking loading status at 5 and 10 rounds. The base pad was heavy polymer and did not add to the front strap. Breakdown of the magazine to mag-body, spring, and follower was a simple procedure of depressing the base pad retainer and sliding off the pad. This revealed a stout spring and polymer follower encased in a hard steel body. We felt the price of this pistol reflected quality construction that carries over to accessories such as the magazines.

The trigger mechanism was traditional double action, with the first shot double action followed by single action fire. The Cheetah 84LS will not fire unless the magazine was in place, but we did have a great deal of trouble locking the slide back unless an empty magazine was in place. We attributed this to the way the slide release was blended into the grip profile. This lever was easily accessed for downward motion to release the slide, but difficult to get underneath and push upward to set the lock. After chambering a round, the gun can be fired single action, or the hammer can decocked by pushing the safety upward. This lever was ambidextrous. Leaving the safety/decocker lever in the upward position also disconnects the trigger. Lowering it to the firing position made the trigger ready for a double action first shot.

It was possible to raise the safety to a position half way up leaving the hammer back. But, this did not create a single-action cocked and locked state of readiness. Depressing the trigger will not fire the gun but will instead activate the decocker, drop the hammer and disconnect the trigger. At the range we found the transition from double to single action to be smooth, which in some measure was a product of the comfortable hand position which did not tempt the shooter to readjust one’s grip between shots.

In terms of 15-yard accuracy, the Cheetah M84LS shot the only 1.0-inch group of the session, and it had an average just under 1.9 inches for all groups fired. We credit this to an above-average trigger and sights that offer a clear view of the light bars created by the front and rear sights but also a dot on the front sight that mates visually with a defined area in the rear notch. The Beretta also produced the most velocity from each test round and average muzzle energy measured 195 foot-pounds firing the Federal American Eagle 95-grain FMC round. This was 11 foot-pounds higher than its next competitor.

With its double-column design assuring maximum capacity and wide grip frame offering maximum control, the Cheetah 84LS was not the most concealable weapon, But it did offer the kind of ergonomics that smaller-handed shooters will appreciate. It had all the accuracy, reliability, and capacity of the full-sized Beretta 92, but in a more manageable package.

Though .380 ammunition was in some cases more expensive than its 9mm big brother, we found Hornady’s 90-grain XTP hollowpoint to be economical (20 rounds for $11.95 retail). The Cheetah handled our choice of hollowpoint ammunition with ease and comfort. With many good frangible rounds also available in .380 Auto, we feel the viability of this pistol for self-defense deserves

The Beretta Cheetah M84 LS .380 Auto, $652, was an Our Pick. This was an easier to handle and easier to hide version of Beretta’s signature pistol, the model 92. While the .380 was not a big stopper, the Cheetah was still a higher capacity option with more class and charm than heavier recoiling plastic guns.