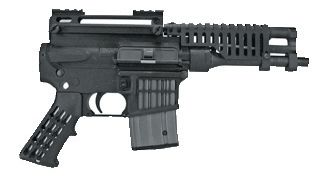 The OA 98’s frame was aluminum. Olympic Arms told us the grip was also fashioned from aluminum, but the one on our pistol looked more like polymer. To make the gun lighter, both the grip and the magazine housing were skeletonized. The grip did not look comfortable, and we saw shavings from the cuts. Nonetheless, when we handled the gun, we found comfort was not a problem, and we thought its design was effective. The heat shield that draped over the gas tube, recoil system, and barrel was relieved in the same manner as the magazine housing. The cuts in both areas gave the gun a distinctive appearance.

This model did not come with a case or with a magazine. In fact a manufacturer’s note on the website (olyarms.com) said that Olympic Arms is still negotiating with a supplier for a suitable case.

Chambering a round was accomplished via a charge bar accessible from the left side of the weapon. This bar offered a loose-floating fit and rode atop the weapon just below the scope mount. This arrangement made charging the weapon easy, but if you wished to lock back the bolt, a juggling act was required. Because the OA 98 could not be braced against the shoulder, locking back the bolt meant pulling the charge bar back with curled fingers of the left hand and holding the bolt rearward by placing the left thumb behind the end plate. Then the shooter had to reach over the top of the weapon with the right hand to set the bolt catch. The safety was similar to a standard AR-15 design, situated on the left side just above the grip.

There were no supplied sights on the OA 98, and the Picatinny rail was split into two sections. This rail would favor mounting a tube scope with rings front and back, but we chose a Bushnell Holosight electronic scope that included an integral mount. The Holosight was extremely rugged, very easy to zero, and the displayed reticule (a small dot in a circle) suffered from zero parallax. This meant the reticule did not have to appear centered in the scope to represent point of impact.

The last preparation we made for firing was to choose proper hearing protection. We would be conducting our tests outdoors, but from a covered bench with the aid of a sandbag rest. However, we found this gun to be very loud, even when fired in open spaces. For our safety and comfort, we opted for wearing earplugs and earmuffs. We used a pair of electronic muffs from Walker’s Game Ear, ($239, [800] 424-1069). Over the course of this test they protected our shooter’s hearing by gating out high-decibel noises, but amplified normal conversation as desired.

Given the sound and blast from the OA 98, how and when would this gun be used? We’re not sure. In the middle of the night a home-defense scenario without hearing protection would likely mean permanent hearing loss. Nighttime muzzle flash would also be significant. And we don’t think the 98 is the right gun for hunting, though the .223 cartridge is suitable for taking game. Thus, we had questions about what it would be used for, other than plinking.

Remembering that the OA 98 was not shipped with a magazine, we tried a variety of AR-15 magazines. The Bushmaster was shipped with a 10-round magazine with a green polymer follower, and we tested the OA 98 with this component as well as several surplus 20-round magazines and some English made 30-round models ordered from Dillon Precision, (800-223-4570) for $20. We found that neither gun digested any of the hollowpoint ammunition we tried, including the Winchester USA 45-grain JHP rounds. However, the OA 98 always cycled ball or softpoint ammunition.

The OA 98 did not come with open sights, so we shot for record with the Bushnell Holosight in place. The most accurate round proved to be the Georgia Arms remanufactured loads. But we did notice that the point of impact on each target was significantly different. Standard deviation of this ammunition was much higher than our other two test rounds, and velocity was significantly lower, averaging below 2000 fps on our Oehler 35P chronograph ($345, Brownells, 800-741-0015). The Federal and Black Hills ammunitions both shot 1.4-inch five-shot average groups, but the Black Hills V-Max bullet traveled at nearly 2100 fps and produced much more muzzle velocity than the Federal rounds. With finer optics we think we could have achieved better accuracy with both of our guns.

In terms of reliability, the OA 98 continued to run without problem, and it never seemed to get dirty. It did collect a lot of scuff marks just behind the ejection port (from spent shells), but ejection did not seem to cause a problem for the shooter. In fact, we weren’t even aware of this until we got home from the range.