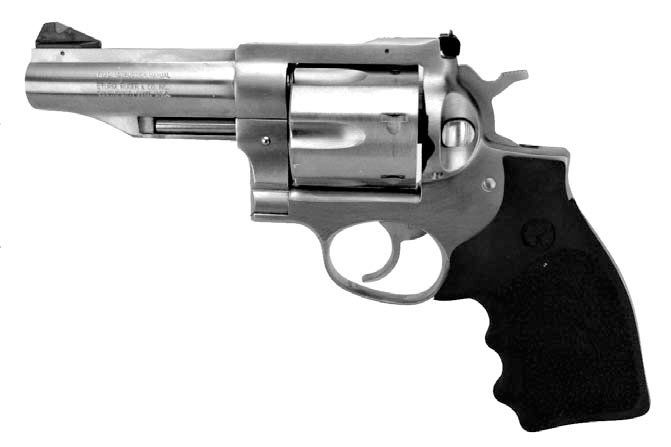 Like the Smith & Wesson 629, Rugers stout-looking 4-inch Redhawk cut a profile of classic lines unique to its manufacturer.

Only available in stainless steel, the KRH-444 employed a brushed finish. The boxy frame featured a push-button cylinder latch, broad top strap, and a fully adjustable rear sight fixed by a short stem pinned into place.

The ramped front sight was a separate unit also pinned into place. It was black with a plastic orange-colored insert. The front of the unit was beveled for easier holstering, and except for the insert, the edges were lined to reduce glare. We didnt experience quite as much glare from the insert as we did with the Smith & Wesson, most likely because the ramp was cut at a steeper angle.

The barrel carried just enough underlug to shroud the ejector rod, and the grooved flat top of the barrel was most pronounced. The cylinder offered two lockup points by way of pressure at the rear of the ejector rod and a detent latch located on the crane that interlocked with the frame just below the shroud for the ejector rod. The tip of the ejector rod does not play a part in lockup, and it was not screwed into place. It couldnt back out and make cylinder release difficult. The timing lugs were cut deeply into the fluted cylinder, and the cylinder stop was taller and more heavily sprung than on the Smith & Wesson. There was no provision for an internal lock.

Ruger has recently begun offering Hogue grips with its Redhawks. Our revolver came with Hogues Bantam grip in place. This is the first time we have seen this grip on a large revolver, and it worked very well. The Bantam helps shorten the gun by leaving the back of the grip frame completely exposed. Shock absorption was addressed by evenly filling the hand with a bulbous profile. Given the Ruger was the heaviest gun in our test by about 7 ounces, we still would credit the Bantam grip with making the Ruger the most comfortable of our test guns to shoot. The Bantam was a slip-on grip that required a supplied tool to pry it from the frame. Underneath the grip we saw the mainspring action was supplied by a combination of a lever and a coil spring. This was more complicated than the single-leaf-spring Smith Wesson or the single-coil-spring Taurus designs. Nevertheless, the double-action trigger was predictable and smooth. The shooter had plenty of feedback by way of telltale clicking and cylinder rotation. The Redhawk was the easiest gun to shoot accurately in our double-action repeat-fire tests. From the bench the Federal Fusion ammunition in combination with the Redhawk produced the best overall performance. Velocity was about 70 fps less than the 629, but our best five-shot group measured 1 inch across. Groups produced firing the American Eagle ammunition were about the same as the Smith & Wesson, with a deficit in average velocity of about 40 fps. Accuracy firing our choices of .44 Special ammunition was less satisfactory, with groups measuring 3 inches across and more.