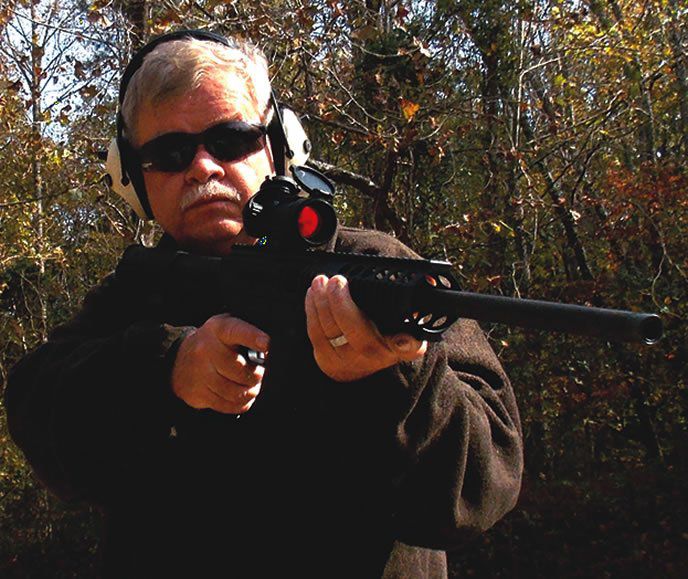 Re Special Reports, February 2015
Thanks for all the great reports this month. You featured my beloved 44 Special in glowing terms and tested a recent variant of my favorite 9mm subcompact, but the pice de rsistance was the timely follow-up on your June tests of the Just Right Carbine in 45 ACP. That first report arrived just a few weeks after I bought my JRC and prompted me to refill all my magazines with round-nose FMJ fodder. Your new report says all the things Id hoped to read in the first one, but there is one glaring omission, in my opinion. You tell of sending the JR back to the makers, but there is no mention of what they had to do to make it right. Personal circumstances keep me from getting in a rigorous range day with my JRC to see for myself, but even if I do have feeding problems, I dont know where to tell my gunsmith to start. Were there problems in the feed ramp, bolt, extractor, or elsewhere? Other than casing damage, what should I look for? Please keep up the good work and forgive my former belief that you were never again going to report on anything of real interest to me.

JR replaced the barrel because the chamber needed to be recut. The factory turned the gun around in about three weeks.
– Todd Woodard

How to Find…
I dont know who sets up how your search feature works, but I have now spent more than 30 minutes trying to find something, and its time to ask you, since its driving me nuts.

In your article of 380 ACP pocket guns was the following text: Our tests of several 380 ACP self-defense loads had three (Federal 90-gr. Hydra-Shok JHP, Speer 90-gr. Gold Dot JHP, and Fiocchi 95-gr. FMJ) that penetrated at least 13.5+ inches in water, very close to what a Remington 125-gr. JHP 38 Sp. +P did as a control – and not too many experts say the 38 Special is too little gun.

I have searched by 380 ACP, 380 self-defense, 380 Ammo, and ammunition, and I have given up, so, please tell me where I can locate your article which contains the text quoted above. If you agree with me that it would be beneficial to your readers, please put in a clickable index or other method to directly access the information (with the date and issue published, but listed by caliber, since that is what would be desired) of all the articles you have published where you test and compare self-defense ammunition (or for that matter any ammunition). I think it would be greatly appreciated by more people than just me.

Check the October 2010 issue, Gauging 380 ACP Loads: FMJ May Be the Only Way to Go. Or, to find the page with all the ammunition tests on it, go to Gun-Tests.com and type in Ammunition Comparisons in the advanced search window in the top-right corner of the browser window. Theres only one file in the database with that phrase in the title, and it pops right to the top. I just updated it, so its current, too. Youre right, the ammunition stories are hard to find, because theyre not indexed in the internal search engine like gun features are.

Seven years ago when we initially set up the indexing system, we only built it to search for guns, because thats what we covered almost exclusively at the time. Ive added a lot more accessory and ammunition testing since then because readers asked for it. So theres really nothing in an ammo article to index like we have for guns.

The indexing system we use internally loads the guns into a proprietary database inside the Gun Tests site. Its designed to make older material accessible for subscribers. Non-subscribers can see the headlines and a couple of paragraphs from the story, but non-subscribers cant get at the full articles or the database. Both are reserved for subscribers.

So, if you use the compare guns feature on the website, you can search for Pistols>.301 to .400> Price, and a list of handguns chambered for 380 ACP and other cartridges in the defined caliber and price range will be sorted out alphabetically, for your perusal.

The same thing occurs if you select Brand Index at the top of the homepage, or View by Caliber, or View by Action. All of those sorting choices are generated by the data we load in the indexing system we use for guns. There isnt a separate system for ammo. What I have suggested is a separate pull-down tab for Ammunition in the Accessories header on the website to house the 19 ammo stories currently in the system. Anyway, were aware of the problem and were working on it.
– tw

Ive been a subscriber to your magazine for a very long time. You had an article on various brands of ammunition, with the pros and cons of each. Unfortunately, it got thrown out, so I cant reference it. I wanted to purchase some new 9mm ammunition and felt this might be a good time to look at alternatives. I have a Browning Hi-Power and have been using Federal for the last 30 years, which Ive been very satisfied with. However, I would like to try out some of the newer types that have come out that might be worth looking at.
– C Bradley Tashenberg

Weve run several different 9mm Luger ammunition comparisons over the years. As I noted above, log on to Gun-Tests.com and search for ammunition comparisons, without the comma and quote marks. There are links in that story to all of our ammo tests. But if you want to look at the specific issues with 9mm tests, check these out: Which Is Better: 9mm Luger or 45 ACP? Answer: It Depends, October 2014; 9mm Short-Barrel Choice: Wed Carry 124-Grain Speer Gold Dots, October 2013; Personal-Defense Handgun Pick: 9mm Luger or 357 Magnum? August 2013; Alternate 1911 Cartridges and Loads: 9mm, 38 Super, 10mm, January 2013; Frangible Ammunition Testing: We Give Nine Loads a Fair Shot, July 2012; 9mm +P and Other Powerful Loads: Black Hills Is a Best Buy, April 2011; A Hard Look at 9mm Luger Loadings: Speer, Fiocchi Win, September 2010.
– tw

Re 9mm Subcompact Shoot-out: Nano, LC9s, and the XD-S 3.3, February 2015
I read your 9mm Subcompact Shoot-out article several times looking for the specific safety features of the Springfield XD-S that your testers said they liked, particularly since this pistol does not have a manual safety. But other than the reference in the Gun-Tests Grade summary box saying, we liked the safety features, I was unable to find anything in the article text about these features. What are these features? Did I miss something and need to read the article again?
– Allan M. Crane

Alan, thanks for reading Gun Tests. The features that we liked about the XD-S (above) included the firing pin block/drop safety, which most handguns have today, but also the grip safety, which only a few non-1911 types have. Unobtrusive and pressed in a natural motion as the grip is taken, this feature locks the action as soon as the hand is removed.
– Bob Campbell

Coonan 357
Has anyone from Gun Tests used a Coonan 357 Auto Mag? I have one for personal carry, and it has proven to be the most accurate handgun I have ever fired, including my 357 S&W M&P R8 with a 5.75-inch-long barrel.
-Jim Myke

Were in the process of getting a Coonan 357 Magnum pistol. Were debating about how to match it up: with a 357 Magnum revolver, a 357 SIG pistol, or both.
– tw

Re Firing Line, February 2015
I have a Hi-Point 45 ACP Carbine. This is my second one as the first, in 40 S&W, was stolen. It didnt have a bad trigger – it had a trigger that made it impossible to shoot with any accuracy. I sent it back to the factory, and they brought it up to being just a bad trigger. Thats all in the past. My current carbine merely has a bad trigger. The article in the February 2015 issue about the Just Right Carbine Follow-up reminded me that I needed some info from you folks. In the Firing Line section of the July 2014 issue, a Mr. William B. Richards III wrote that he had a trigger job done on his Hi-Point Carbine, creating a smooth 3-pound pull. When I received my gun, I inquired of the gunsmith at the shop if he could do a trigger job on it. He informed me that the trigger parts were made of plastic and there was nothing that could be done to improve it. Because of the articles in Gun Tests, I think hes wrong. Who can I correspond with about getting my carbine up to par? By the way, my first Hi-Point was rather ugly, but the new ones aesthetics have improved dramatically! Thanks for keeping all of us well informed.
– Dan Cheraz

Dear Mr. Cheraz : Its a pleasure to test and write about guns. The safest bet is to call Hi-Point and ask them what aftermarket trigger kits they recommend, if any. We havent tested any of the items we found when we searched for Hi-Point Carbine replacement triggers, so Im leery of recommending any to you. I did reach out to Mr. Richards and ask him to send me the contact information for the gunsmith he mentioned in his letter, and if I hear back from him, Ill send it along.
– tw

Re 9mms: Classic Artillery Luger Vs. 1896 Mauser Broomhandle, January 2015
I really enjoyed the article and tests on the Luger and the Broomhandle. I have always wanted both. The September 1999 issue of Gun World had an evaluation of the Chinese version of the Broomhandle in 9mm, and it received high marks. I ordered one from IAR in California. It is a very nice looking pistol; it came with a 20-round and a 10-round magazine, cost was $439 plus shipping and broker, etc. Other than being numbered 19106, there are no markings on it. There is a faint marking on the hammer, but I cannot make it out with magnifying glasses and lights. I have not taken it apart, even after studying about it. I have R.J. Bergers book, Know Your Broomhandle Mausers, but still am wary of taking it apart. I get it out to look at it. I have read that as a young cavalry officer in the battle of Omdurman that Sir Winston Churchill was armed with a Broomhandle, and used it to his liking. Thanks for a good read, as always.
– D. J. Price