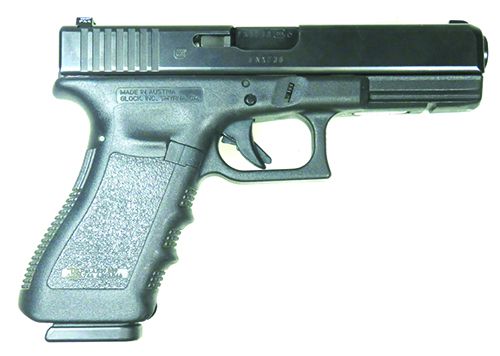 The new price is a recent cite from OmahaOutdoors.com. We’ve tested the G37 Gen 3 and gave it a Buy It rating in the past. Unfortunately, this go-round, the G37 received a slightly lower grade, but not due to the performance of the pistol. We still think this pistol performed well, but the issue is ammo availability. Not that the news of the 45 GAP’s demise is greatly exaggerated; 45 GAP is fairly easy to come by and as expensive as either 45 Auto or 10mm ammo. Federal and Remington have discontinued manufacture of the caliber, but Winchester, Sellier & Bellot, MagTech, Speer and Underwood websites all list the caliber. Finding this ammo in stock at a dealer is not likely, so we purchased our ammo online. Getting ammo for this pistol can be more difficult than the more-popular 45 ACP, and we have to ding it for that.

The idea behind the G37 was to fit 10 rounds of 45-caliber ammo in a 9mm-size pistol. As the story goes, Glock partnered with Speer to develop the 45 GAP (Glock Automatic Pistol). Most shooters consider the 45 GAP a shortened 45 Auto, and that is one way to describe the round, but the 45 GAP was really built from scratch to generate 45 Auto ballistics from a smaller case. It does not share the same case with 45 Auto, but is instead a rebated-rim round similar to the 40 S&W and 10mm.

Our sample was in excellent condition and came with three magazines and steel Trijicon Bright & Tough night sights with a three-dot white outline and green tritium inner dots. The tritium still glowed in this used pistol. We liked these sights because the front blade is wide, and there is plenty of space on both sides of the blade in the rear notch when aiming. We would have liked the front sight dot to be larger or maybe orange in color to help differentiate it from the two rear dots.

Like all Glock Gen 3 pistols, there are finger grooves molded into the grip front strap and texture on the side panels and back strap. We think it is fair to say the grip looks dated compared to Glock’s Gen 4 and Gen 5 models, but there is a legion of Glock shooters who feel the Gen 3 guns are the best generation Glock has produced. We have also become accustomed to forward slide serrations, and we would have liked them on the G37 to more easily perform a press check.

The G37 employs the extended slide release used on G34s and G35s, and the magazine release is small compared to the ones on the LWD pistols and the S&W.

The magazines use a polymer body with witness holes in the back of the magazine. The follower and magazine body clearly state 45 GAP so the user won’t try to load 45 Auto, but we did anyway and found that 45 Auto ammo can be loaded in the 45 GAP magazines. Thankfully, the 45 Auto rounds will not chamber in the 45 GAP pistol. Still, be aware of the ammo you are using. The tenth round of GAP was difficult to load in the magazine. We used a Glock magazine loading tool from a G20 to top off the magazine to save wear and tear on our thumbs. We also found that it took a firm push to seat a fully loaded magazine into the pistol when the slide was forward. There is very little extra spring compression left in the magazine when fully loaded.

The trigger pull was typical Glock, with about 0.5 inch take-up and a 6-pound pull. There is a mushiness with Glock triggers followed by a consistent break. In our opinion, they are not a bullseye-style trigger by any means, but they are a very serviceable trigger.

The G37 is a heavy pistol to tote, and we liked how the Bravo Concealment Kydex holster made carrying the pistol easy under a concealing garment.

The most accurate GAP load was the Speer Lawman 185-grain TMJ with a 1.6-inch five-shot group at 25 yards. The other loads were close on the Lawman’s heels. The Speer LE Gold Dot 200-grain GDHP load’s smallest group was 1.9 inches, and the Sellier & Bellot 230-grain FMJ was 2.1 inches. On average, however, all ammo shot 2-inch groups at 25 yards. We also found the Glock shot right on with no need to adjust the sights.

Going to the dynamic portion of the test, we found the 45 GAP could get away from you when firing the 10-yard stage requiring two quick body shots. The 45 GAP has a snap to it, though not as violent as the 10mm, but definitely more pronounced that the 45 Auto.

Our Team Said: The Glock worked flawlessly and had excellent accuracy. We think this pistol and this round has its purpose in self-defense situations. For those users wanting a pistol with a small-girth grip chambered in 45 caliber, this would be a good purchase. Because ammo is a bit more difficult to come by, we would buy ammo in bulk to ensure we have it on hand. A quality used G37 would be hard to beat if you’re willing to bet on ammo availability.