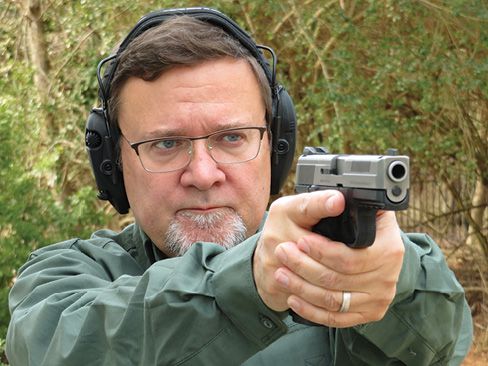 The FNS series is, in essence, a striker-fire version of FN’s FNX hammer-fired pistols. FN introduced the FNS series to law enforcement in 2011, and by 2012 released it to the commercial market in 9mm and 40 S&W models. Compact and long-slide variants came out in 2015 and 2013, respectively. LE agencies in Maryland and Arizona adopted the FN pistols at the time. The FNS line appeared in 2018.

Our sample FNS-40 is a full-size pistol with a black polymer frame and a matte-stainless-steel slide. It came with three 14-round steel magazines. In hand, it felt good and was a natural pointer. The grip girth was comfortable for average-sized hand; not too chunky. The toothy texture on the side grip panels and interchangeable backstrap felt comfortable, just enough gripping adhesion without feeling too abrasive. The front grip strap has fine serrations, which also help manage recoil. Our sample just had the arched backstrap, but a straight backstrap also originally came with new guns. The bottom of the trigger guard is cut for a higher grip, and there is small beavertail. The magazine well is flared for easily funneling magazines home.

The slide stop and magazine-release button are ambidextrous. The slide stop reminded us of a Glock slide stop in size, with a ridge in the polymer frame on either side of it, making it snag-free. It fell right under the pad of the shooting-hand thumb. The teardrop-shaped magazine release is large. We had no issues dumping the magazine using the thumb of either shooting hand. It works well with gloved hands, too. The FNS-40 pistol sports a full dust cover with accessory rail. The large trigger guard allowed use of gloved hands. When gripping the gun, the right-handed testers rested the thumb of their support hands on the take-down lever for a consistent grip.

The trigger is wide and smooth with a slight arch in the center. It requires that the bottom portion of the trigger be pressed to fire the pistol. On average, the trigger pull was 6.4 pounds with a consistent break. We liked it. Reset was short with a distinct trigger-reset sound after each shot.

The slide and the barrel are both constructed of stainless steel. The barrel is hammer forged. A steel recoil rod is used to smooth the recoil pulse. Surface area of the slide is blocky but with large radiused edges, making the gun fairly smooth. The muzzle was tapered so it is easier to reholster the pistol. There are serrations both front and rear, providing good traction to rack the slide and do a press check. The extractor is external and also acts as a loaded-chamber indicator by slightly protruding and showing a red mark that tells the user that a round is in chamber. It can be felt and seen. The ejection port is large so it can cough out 40-caliber cases. Fixed three-dot sights on bases are dovetailed into the slide, which we like because either sight can be tapped left or right a bit to fine-tune them. We would have liked the front dot to be larger and perhaps a different color for more contrast.

The FNS-40 was very pleasant to shoot. Testers either used the pad of their trigger fingers or the first joint on the trigger. Either way, we all were able to control groups downrange. Looking at the range data, the FN was the most accurate pistol in the match up. We attribute this to the fine trigger, grip, adequate sights, and smooth recoil management. Some thought the FNS-40 had recoil similar to a 9mm.

Our best five-shot group at 15 yards, which measured 1.36 inches, came with Hornady Black 180-grain XTPs. Federal American Eagle 155-grain FMJs were second smallest at 1.70 inches. The best group with the 165-grain BJHP Remington Golden Sabers was 2.09 inches. On average, this pistol grouped five shots at 15 yards between 1.53 to 2.27 inches. We found the FNS-40 to be easy to shoot, and in rapid-fire testing, we were able to keep all shots in the center of mass. In our opinion, a used FNS-40 is an excellent defense gun. It may be larger than the Kahr and Taurus, but not by much.

We were happily going to award the FNS-40 an A rating when we discovered an issue. While we were researching aftermarket sights and backstrap modules, we came across an FNS Service Bulletin issued in 2021. Under certain conditions, the FNS could delay fire. According to the Service Bulletin:

“The condition may result after the FNS pistol slide is forced out of battery at a very small and specific distance, such as what might occur if the muzzle end of the slide is pressed against an object, and the trigger is pulled. The pistol functions as designed and does not fire. However, if the condition occurs, one of two scenarios may result: (1) if the trigger is held to the rear, the pistol could delay firing until the time when the slide moves back into battery, or (2) if force is removed from the trigger and the slide moves back into battery, the pistol could fire if jarred. In the unlikely event that scenario (2) occurs, keep the pistol pointed in a safe direction and rack the slide to the rear to reset the pistol. Avoid a “tap, rack, bang” clearing sequence.”

You can find out if your pistol is affected by going to FNAmerica.com/customer-support/. We typed in the serial number of our sample, and sure enough, it is part of the recall. FN will send you a shipping label and replace the striker free of charge. Because our gun was used, we wondered if the previous owner returned it to the factory for the new striker. We duplicated the sequence outlined by the Service Bulletin with an empty pistol and were able to make the pistol delay fire. We will send the pistol to FN and follow up on this story once we receive it.

Our Team Said: We liked everything about the FNS-40 — trigger, grip, accuracy, and smooth recoil. From our perspective, the gun functioned fine, and if we did not know about the Service Bulletin, we would not have suspected an issue with the gun. Unfortunately, the gun as tested is unsafe, so we have to fail it until we receive a modified FNS-40 from the factory. If it is indeed fixed and we verify that, then we’ll change the grade to an A and let you know.