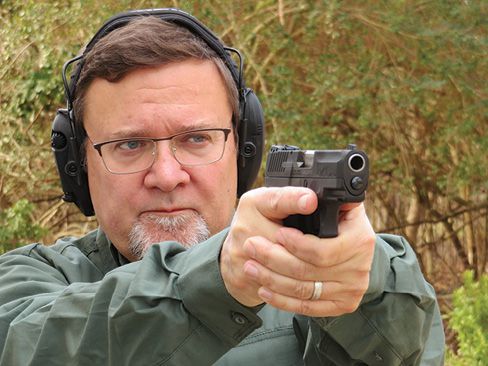 All of these 40-caliber pistols are similar in dimensions and barrel length. The SD40 VE, FN FNS-40, and CT40 sport 4-inch barrels and are, for all intents and purposes, full-size pistols. The G2c is a compact pistol with a 3.25-inch barrel. All of these guns are striker-fired with safeties built into the trigger, and all feature polymer frames. These guns then take different design paths, as you will soon see. We chose these particular pistols because we wanted to see if we could find a reliable, easy-to-use, and accurate 40 S&W for defense and concealed carry. And we wanted to do it for under $350. The used Kahr and FN top out on the high end of our price range at about $350; the new Taurus and S&W are $271 and $258, respectively. One thing to remember as the pendulum of popularity has swung toward the 9mm, there are plenty of shooters who have traded in their snappy 40 S&W-chambered guns for shiny new softer-recoiling 9mms. As a result, there are bargains to be had, and, in our opinion, the FN and Kahr are bargains, and there is a reason why they are more expensive than the Taurus and S&W firearms, which we’ll get into.

We concealed-carried the FN, Taurus, and S&W in a Safariland GLS 575 IWB Pro Fit Compact holster ($68; Safariland.com). This is a multi-fit holster, meaning it doesn’t really fit any pistol perfectly but is compatible with a lot of pistols. We used a DeSantis IWB Slim-Tuk Kydex holster with the Kahr and wore it appendix style. All of these guns are comfortable to carry, and the Taurus, due to its size, was the easiest, followed by the thin Kahr. Here’s the rest of the nitty gritty — and we do mean gritty — on these four 40 S&W striker-fire pistols.

The other new pistol was a Taurus G2c. This is another inexpensive EDC option that offers decent accuracy and compact size. The trigger is unique in that it is a single-action striker fire with double-strike capability. The double strike means the trigger can be pressed again in the event the pistol does not fire from the initial trigger press, similar to a revolver. Our thought was, we tap-and-rack a pistol when the trigger is pulled and it doesn’t go bang. Why would we want double strike capability? Do we really want to unlearn our training? We just might be old dogs not interested in new tricks. Taurus debuted the G2c in 2013, and our guess is with Taurus’s new G3 guns, the G2 series will most likely stick around because it has a lower price point than the G3 series.

The G2c comes with two steel 10-round double-stack magazines. In hand, the pistol feels good and points naturally.

The slide has rear serrations; we would have like forward serrations, too. On the top side is a loaded-chamber indicator that pops up when a case or cartridge is in the chamber. It can be seen and felt. Three-dot polymer sights are 80s-esque, but usable. The dots are small and the same size, not a lot of contrast. Use your significant other’s hot-red nail polish to paint the front red so that it stands out more. The rear sight is fully adjustable.

The polymer frame feels thin in hand. There is a pebbled texture on the grip side panels and the front and rear grip straps that offers plenty of adhesion with no abrasion. There are divots in the side grip panels that pose as thumb rests, and there are also two divots above the trigger guard that act as support-hand thumb locators. We like these support-hand divots because they force you to create a consistent grip, if you use then as designed.

The slide stop is a tab of stamped steel a la Glock protected by a polymer ridge. We found it easy to use the slide stop during a reload. A manual thumb safety is located directly behind the slide stop, and we found it difficult to consistently sweep it on or off with our thumb. The safety is set up for a right-handed shooter. In reality, if we carried this pistol concealed, we would not use the manual safety.

The G2c breaks down like a Glock so it is super easy and simple. Looking under the slide, we could see two sears built into the mechanism. This gives the G2c the double-strike capability. Dual recoil springs help tame the snap of the 40 S&W round. We found the slide pulse was very smooth with G2c. The plastic guide rod no doubt helps keep the cost down. We’d prefer a steel guide rod. The magazine release is small and serrated. We needed to adjust our grip to drop a mag. The magazines have a lip built into the floor plate, so the gun feels like it has a full-size grip. A Picatinny rail is built into the dust cover.

The steel magazines were hard to load to the last round, but they became easier to load over time.

Going hot, we felt the safety lever in the face of the trigger click as it cleared the frame and allowed the trigger to move rearward. The click was so pronounced we thought the pistol fired but the round did not go off. That was just the initial take up, then we hit the wall. After the wall, we felt the full 5.7 pounds it took to press the trigger, with a bit of grittiness. We eventually learned to manage the trigger, but for some evaluators, it was not to their liking.

Our smallest five-shot group at 15 yards was with Federal American Eagle 155-grain FMJs, which measured 1.48 inches. With the handload and the factory ammo, we averaged 2.70- to 3.3-inch groups. Definitely suitable for defense. In speed shooting, we also had an initial flyer, but we soon learned to manage the trigger and clustered holes in the center of mass. We had zero malfunctions with this gun and that gave us more confidence. Recoil pulse was very smooth.

Our Team Said: You will either like the trigger or not. Our team was evenly divided. We did eke out decent accuracy, and for the cost, we think this would make an adequate EDC gun.