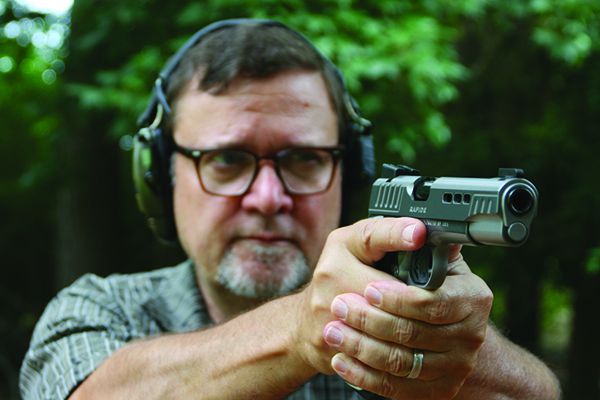 At the high end of the price scale is the Rapide Black Ice. This is a stylish 1911 that borders on a custom-gun look and feel. Yes, this is a sleek and sexy looking 1911, but is it all looks and no game? Kimber took the time to think out the details on this 1911 model. The Rapide Black Ice has the looks, performance, and accuracy to thrill most any shooter.

The pistol came in a hard case with one stainless-steel magazine, a polymer bumper pad, and plastic bushing wrench. For the price, we would have appreciated a second magazine.

In hand, the Rapide’s fuller grip fills your hand. You also notice it is lighter than the Ronin.

What catches your eye with this Kimber are the stepped cocking serrations fore and aft on the slide. The slide also has cut-outs in the top and sides to lighten it. Kimber says the windows lighten the slide mass, allowing it to cycle and lock faster. We noticed the RIA cycled slightly slower, and that is due to the extra barrel and slide. On the Kimber, it was hard to tell if the lighter slide cycled faster because the 10mm Auto cycles so fast in most guns. We found no wiggle in the barrel, nor any jiggle in the slide-to-frame fit.

The finish is sublime and adds to the cost of this 1911. It wears a premium three-tone finish. The barrel has a durable, black diamond-like-carbon (DLC) coating that matches the sights, grip panels, and magazine bump pad. The stainless-steel slide and frame are treated with a gray KimPro II finish. The aluminum trigger is anodized to match. The gray finish used on the flat surfaces of the slide and frame is a shade darker than the natural silver color of the stainless-steel controls. There is a lot of machine work on this gun, and in our view, it is tastefully executed.

The coarse slide serrations allow for easy racking and press-check maneuvers. The top of the slide is milled flat. Tru-Glo TFX Pro Day/Night Sights are dovetailed in place in the front and rear. Both front and rear sights use green fiber-optic pipes. The front also has an orange ring around the green fiber optic for contrast. The U-shape notch in the rear sight is wide and provides quick sight acquisition. The rear sight also has a ledge that can be used for one-handed cocking. We liked these sights, and the range data agrees. The Rapide came in second in accuracy. The trigger face is serrated, and travel can be adjusted. It broke at 5 pounds, which was okay. If the trigger pull were a pound lighter, we think we could easily tighten up the groups we fired with the Kimber.

The match-grade linked barrel is supported by a traditional G.I.-style barrel bushing with a single round-wire recoil spring topped with a smooth-faced plug. The receiver/frame is similar to a G.I.-style frame with no accessory rail. The front grip strap wears has a unique undercut that is cut into the frame in a straight line about 0.25 inches wide. Kimber textured the rest of the frontstrap in the company’s dimpled Stiplex pattern texturing. This texture provides a solid grip with no abrasion to the user’s hand. The mainspring housing is machined out with three rectangles patterned after the cutout windows in the slide. The butt is fitted with a beveled, low-profile aluminum magazine well that makes faster and smoother reloads much easier. The magwell is nicely fitted and blended with the grip panels.

The G10 grip panels are large with multiple texture types and a rectangular pattern that matches the mainspring housing and slide. The gripping fingers of your shooting hand naturally fall into three of the rectangular indents and offer a good grasp. There is also a nice cutout for a user’s thumb to access the magazine release. Some testers thought the grip was too large since they couldn’t easily ride the thumb safety when firing.

The slide stop and ambidextrous thumb safety were oversized and easy to manipulate. We felt the left-side thumb safety could have been blended better at the rear where it contacts the web of the user’s hand. We liked the magazine release because it was taller and checkered and offered a faster press compared to the other 1911s.

Going hot with accuracy testing, we found the Rapide was not just another pretty face. The best five-shot group was with the 180-grain FMJ Magtechs, which measured 0.7 inches. The Federal Premium HST with a 200-grain JHP came in a close second at 0.8 inches. The Armscor 180-grain FMJs had a best group of 1.2 inches. With all ammo tested, we averaged 0.9 to 1.3 inches at 15 yards. Yep, fancy shooting for a fancy gun. We did encounter one failure to extract and one slide lock failure with the initial magazine. Thereafter , we had no stoppages and no issues, even when swapping magazines.

For speed shooting, we liked how the Rapide cycled. The sights and the trigger helped to keep us on target and offered control at speed.

Our Team Said: The Rapide is a beautiful 1911 that also performs. You pay the price for beauty, but hey don’t you need a new barbecue gun? If so, this is a good choice.