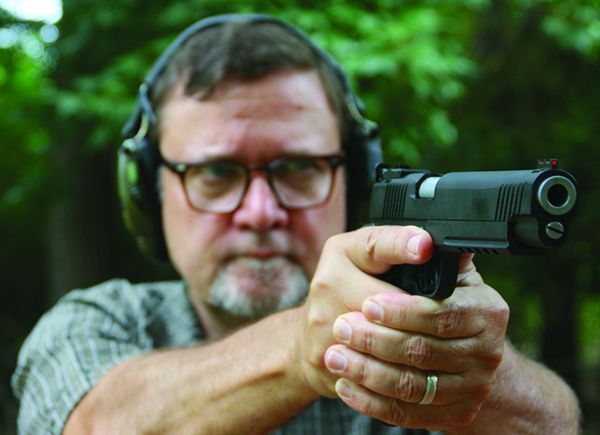 We’ve tested other RIA 10mm 1911 pistols in the past and gave them good grades. We had high expectations with the Pro Match Ultra 6″, and it delivered on those expectations. This is a pistol designed for action-pistol shooting competition or hunting. We’d love to take the RIA boar hunting.

At 48.3 ounces unloaded, the RIA is a handful. It is muzzle heavy due to the extended dustcover and Picatinny rail. The added heft of the rail, barrel, and slide, however, helps in recoil management.

The RIA comes decked out in most of the competition features you’d expect: extended beavertail safety grip, ambidextrous thumb safety, comfortable grips, Delta-style hammer, skeletonized trigger with adjustable trigger stop, two-piece recoil rod for smooth operation and improved accuracy, and fiber-optic front sight and adjustable rear sight. The only feature missing is a magazine well. If we could, we’d trade off the ambidextrous thumb safety for a flared magazine well. That’s our right-handed shooter bias speaking. The gun comes in a hard case with two steel magazines with polymer bump pads.

The RIA does not use a traditional barrel bushing, but instead employs a flared barrel that mates to the inside of the slide. The heavy bull barrel is not ramped. To accommodate the extra barrel length, the RIA uses a two-piece guide rod. There is no traditional barrel bushing, so takedown is different. The end of the guide rod is slotted to accept a screwdriver blade, and you unscrew the guide rod until it can be removed from the slide. This procedure makes disassembly more complicated. There was no wiggle between the barrel and slide, but we felt very slight movement between the slide and frame. We thought this 1911 was built well.

The slide has the traditional dome shape and medium serrations both front and rear. They provided good traction when racking the slide. It took more effort — 22 pounds — to rack the slide. The rear sight is click-adjustable for windage and elevation, and it uses a generously-sized notch for ease of use. The shooter-facing side is also serrated to reduce sun glare. The top corners of the rear sight are also chamfered so your eye focuses on the notch and not on the edges of the sight. Up front, the sight is a red fiber-optic pipe. It is dovetailed into the slide and can be drifted left or right for additional windage adjustments.

The RIA wears a rather plain but well-executed Parkerized finish, giving the long slide an all-business look. The thin grips were made of rubber with a double-diamond checkered texture. The grips provided a soft stickiness that was well suited for the snappy recoil of the 10mm. The serrated front grip strap also aids in recoil management.

The trigger-pull weight measured an even 7 pounds, which was too much for a competition gun. Even with that handicap, we shot the RIA best out of all the 1911s. The trigger face was serrated. Our best five-shot group measured 0.6 inches with the Federal Premium HST 200-grain JHP defense ammo. The best group with training ammo measured 0.7 inches using Armscor 180-grain FMJs. Nice shooting. The Magtech 180-grain FMJs had a best group of 1.1 inches. The skeletonized trigger also can be adjusted for trigger stop.

Where the RIA really showed its stuff was in speed shooting. The heft of the pistol helped us stay on target with better recoil management. We did have one issue in the first magazine of the slide not locking back, but thereafter it ran flawlessly. We attribute the failure to a needed break-in period.

The thumb safety and grip safety were nicely blended and smooth, so recoil in the web of our hands was tolerable, and dare we say, pleasant. There was also plenty of bump on the grip safety to adequately depress it. The thumb safety worked with precise clicks and was easy to operate with our shooting-hand thumb.

During reloads, we operated the long slide using two methods: manipulating the slide stop and sling-shotting the slide. The slide stop was easy to operate and offered less movement than the sling-shot method. Also, the rear sight has edges and can tear the palm of your hand if you rack it too fast and furious. The magazine button is checkered, providing plenty of friction for positive mag ejection.

Our Team Said: The RIA offers a lot of competition-ready features, but more important, it delivers performance. We would happily hunt whitetail deer or pigs with this long-slide pistol.