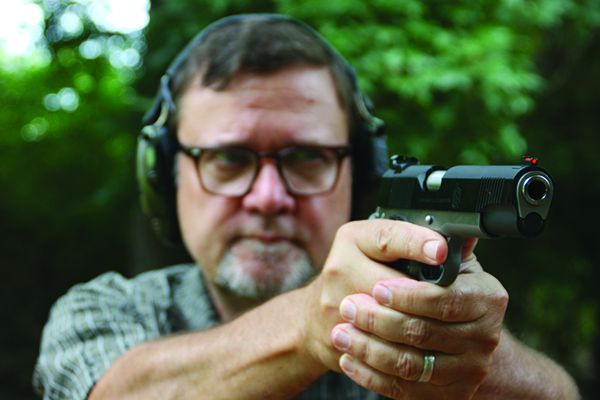 We have tested SA’s Ronin 1911 pistol chambered in 45 Auto a few issues back and graded it an A- due to a single, odd malfunction that was most likely due to a magazine. We had no such issues with the 10mm variant, and that is why we give this pistol a solid A rating.

There is nothing particularly fancy about the Ronin 10mm Auto. It has a classic two-tone finish with a matte-stainless receiver/frame and blued slide. There is no accessory rail, and we feel there is no need for one if this gun is to be carried concealed. The finish was well executed and what we expect from Springfield.

The front sight is a red-fiber-optic pipe that contrasts nicely with the two white dots in the Tactical Rack rear sight. You can rack the slide by using the rear sight as leverage against the mouth of your holster or some other object. We really like the huge notch in the rear sight because it makes it easier to acquire the red dot front. The rear face of the rear sight was serrated to reduce glare. These are excellent sights for a defense gun or action-pistol competition. The slide sports front and rear angled serrations that allow for easy press checks. They also provide a good grip when racking the slide. A G.I.-style bushing makes for easy disassembly, and there’s no need for extra tools or a bent paperclip to capture the recoil spring.

The matte-stainless frame/receiver has a smooth front grip strap. The mainspring housing is finely checkered. We would have liked serrations or a less aggressive texture on the front grip strap for added grip adhesion. The grips are Ahrends-style with the lower front of the grip checkered and the top rear smooth. The strategy here is the area of the grip in contact with the web of your hand does not get eaten raw from the checkering during recoil. Did we mention the 10mm has recoil? These are excellent grips. These grips are also thinner than the typical G10 grips on newer 1911s.

The trigger is SA’s new Gen 2 skeletonized trigger, which operates the same as Gen 1 triggers. Both have a short reset, but the Gen 2 trigger has four holes, while Gen 1 triggers have three holes. On our sample, the trigger broke at 5.8 pounds, which is okay on a defense pistol. We would have like it between 4 and 5 pounds. The trigger face was serrated.

This pistol also uses a 24-pound recoil spring, which is heavier than a 9mm and 45 Auto variant. Our sample came in a soft zippered nylon case with one eight-round stainless-steel magazine. To rack the slide took 20 pounds of effort. The match-grade barrel is stainless and had no wiggle in the bushing. Slide-to-frame tolerances were tight.

The beavertail grip safety shields the delta-style hammer spur, preventing hammer bite. There is a single thumb safety with an oversized serrated lever, which worked perfectly. One way SA keeps the cost down on the Ronin is not installing an ambidextrous safety nor providing more than one magazine. Only one stainless magazine with a bumper pad comes with the Ronin. We would have liked two magazines. An extra mag ($28; Springfield-Armory.com) is not that expensive. The grip safety has a fairly large bump at its base to ensure the safety is fully depressed with a proper shooting grip.

The thumb safety is also nicely blended and smooth, so as the pistol recoils in your hand, there are no sharp edges to abrade your hand. The magazine button is serrated, and we would have liked it checkered and a smidge taller for a bit more friction when operating it fast.

Where the Ronin showed its stuff was at the range. The sights and crisp, consistent trigger helped us shoot best groups that measured 0.8 and 0.9 inches with the Federal and Armscor ammo, respectively. On average, groups measured between 1.1 and 1.6 inches. In speed shooting, we found the thinner grips helped those shooters with average to smaller hands control the pistol. The red-fiber-optic front sight was also easy to track on the black-and-white target.

Our Team Said: Recoil was noticeable with the Ronin, but it was easily managed. This is a no-nonsense self-defense 1911 in a serious chambering. The grips, sights, trigger, and cost easily make the Ronin a Best Buy. If you want a 1911 in 10mm for self defense, the Ronin is an excellent choice.