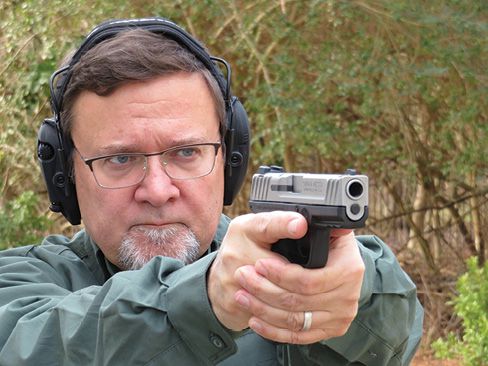 The SD40 VE was introduced by S&W back in 2012 and has direct design linage to the S&W Sigma and, in fact, could be called a second generation SD. This is S&W’s value line of striker-fire pistols. “Value” meaning less expensive. With the SD40 VE and SD9 VE, S&W added an improved self-defense trigger and better stainless-steel slide and barrel.

For $258 plus transfer fees, you can order this online and still have money left over to buy a trigger-spring kit for the SD40 VE. You will need it, or you will need to learn to shoot the pistol with its gritty 8.5-pound trigger pull. The trigger did start to smooth up after use, so we have hope for this pistol. We also grew to like this pistol, the more we used it. Apex makes an Action Enhancement Kit ($55; ApexTactical.com) that will reduce pull weight, trigger pre-travel, and over travel. MCarbo also makes a trigger spring kit ($20; MCarbo.com) that states it will bring down the pull weight to 4.75 pounds.

The frame is matte-black polymer, and the slide is matte stainless. It is a smart-looking two-tone finish. In the hard case were two 14-round stainless-steel-body magazines.

The slide has coarse serrations both forward and aft that provide confidence when the shooter is racking the slide or doing a press check. It takes 17 pounds of effort to rack the slide, but it is easily manipulated. Steel three-dot sights are dovetailed into the slide and provide an adequate sight picture. The sights remind us of the 1980s. There is a dearth of aftermarket sights available, so bringing the sights into 2022 would be a challenge. Part of the issue with aftermarket sights is that S&W used different dovetails in the SD slide, so there is no consistent spec.

A hole in the top of the barrel breech and slide serves as a loaded-chamber indicator. In lieu of a safety lever in the center of the trigger, the SD40 VE uses the bottom half of the trigger as the safety lever. Pressing the trigger there gives a short initial take up to the wall, then a long, gritty pull and a mushy break. Not a great trigger, but one we learned to shoot. In fact, with our 155-grain JHP handload, we fired a best group that measured 1.67 inches. With factory Federal American Eagle 155-grain FMJs, our best group measured 2.11 inches. So even with the trigger, we were able to squeeze out good accuracy.

What helped with our shooting was the 18-degree grip angle, which offers a natural point of aim. The side grip panels have a fine texture, while the front and rear grip straps are aggressively checkered — a little too aggressive, in our opinion. We suspect the checkering is fine for guns chambered in 9mm, but in 40 S&W, the texture abraded our palm. If we owned this pistol, we’d probably run some fine-grit sandpaper over the rear strap to knock off the sharp points on the checkering. There is a textured finger locator directly above the trigger guard on the left and right side of the frame. Use this to place the thumb of your support hand when gripping the pistol. A universal Picatinny-style rail is built into the dust cover for tactical light or laser accessories.

While the SD40 VE liked 155-grain ammo, accuracy with the 165-grain Remington Golden Sabers averaged 2.84 inches, and with 180-grain XTP Hornady Black, it averaged 2.67 inches. It took effort to squeeze the trigger effectively with the SD40 VE.

For the speed evaluation, we found the Smith offered good recoil management, and we noticed a difference in the slide pulse. A bit clunky, but manageable. And the rear grip strap tore at our palm, making extended shooting uncomfortable. Otherwise, we had no issues with the SD40 VE. It ran like intended. We were able to keep most shots in the center of mass. Our first shots went leftward for right-handed shooters due to the heavy trigger. But we soon learned how to shoot this pistol.

Our Team Said: The SD40 VE worked flawlessly, had good accuracy, and was dirt cheap. The trigger started to smooth out, but we would invest in a trigger-spring kit and tone down the teeth on the rear grip back strap. If you can deal with the trigger, then this pistol could be a Best Buy.