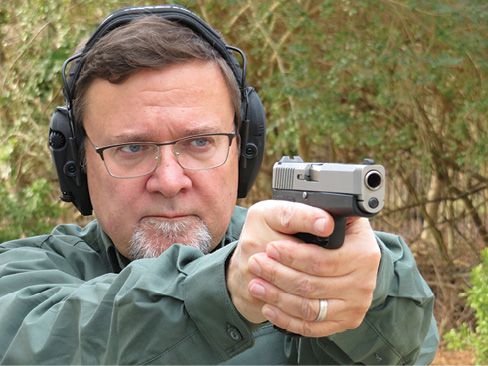 The CT series features a full-size polymer frame with a matte-stainless-steel slide. It has that dated two-tone-finish look. It is a locked-breech, striker-fired pistol. Kahr’s unique trigger, which has a long smooth pull, cocks and fires the gun. Unlike the other striker-fires in the test, there is no preload on the striker. A passive striker block in the Kahr prevents the pistol from firing should it be accidentally dropped. There is not a magazine disconnect, so it can be fired without a magazine. The CT series also features a traditionally rifled barrel in lieu of the Lothar Walther match-grade barrels used in Kahr’s PT series. The cosmetics, namely the slide, are also simplified to reduce cost.

In hand, the CT40 feels thin. All the edges are rounded, so the pistol is smooth on the outside, perfect for EDC. The muzzle is chiseled for easier reholstering. The matte-stainless-steel slide has rear serrations only. We would have liked forward serrations. It takes about 16 pounds of effort to rack the slide. Still, we found it easy to manipulate the CT40.

The rear sight is drift adjustable and has a notch with a bar, which contrasts nicely with the dot front sight. The sights are polymer. The sights are basic and easy to use. We liked them.

The polymer frame has a pebble texture on the side grip panels. On the front and rear grip straps is a coarse, square texture that does not eat the flesh of your palm during recoil. This is how texture should be done for the snappy 40 S&W. The grip angle is about 18 degrees, so it is a natural pointer. There is no accessory rail on the CT40, but we didn’t miss it.

The slide stop is MIM produced and has serrations. We found it easy to operate for a right-handed shooter. The small magazine button is oval shaped and serrated. We needed to adjust our grip to dump the magazine. The trigger is curved, wide, and smooth faced. Pressing it requires a long stroke, but it is smooth and very consistent. We like the trigger, especially for an EDC gun. We would hate this trigger on a target pistol. The trigger guard is slightly undercut for a higher grip on the CT40, and that’s a good thing, especially with the 40 Smith & Wesson cartridge’s recoil.

The seven-round magazine is made with a stainless-steel body, and the polymer floor plate forms a lip on which your small finger may rest. The magazine is easy to load, even to the seventh round. More magazines ($48; ShopKahrFirearmsGroup.com) are available, and we’d buy more if we owned this gun.

When we went hot, we noticed the Kahr’s recoil pulse with the snappy 40 S&W was not as smooth as with the FN. The recoil spring is heavy, and there is a steel guide rod. We also noticed more felt recoil in the palm of our hand due to the thin, single-stack grip.

The best accuracy was with 155-grain FMJ Federal American Eagles, with a 1.56-inch five-shot group at 15 yards. The average accuracy spectrum ranged from 2.49 to 3.17 inches. The CT40 had good accuracy. Moving to the speed test, we found the CT40 allowed us to get back on target fast. During recoil and after the trigger reset, we began to preload the trigger, and as we recovered from recoil and the front sight moved across the target, we quickly finished the press to fire the round. The trigger pull was very long, similar to a double-action revolver trigger. The initial take-up was short before we hit the wall, then we felt the long, smooth press. The break was consistent, and we could anticipate it. We threw the first shot on the Silhouette Qualification target to the outside edge, but soon got the hang of the trigger. The Kahr worked flawlessly.

Our Team Said: The CT40 carried well concealed because it was thin. We forgot we were carrying the CT40. We thought the 40 S&W in the lightweight CT40 would slap us around, but the Kahr helped manage the recoil. We would have liked front slide serrations and a support-hand memory pad molded into the frame for a more consistent grip. We would use this as an EDC gun if you can find one at a reasonable price.