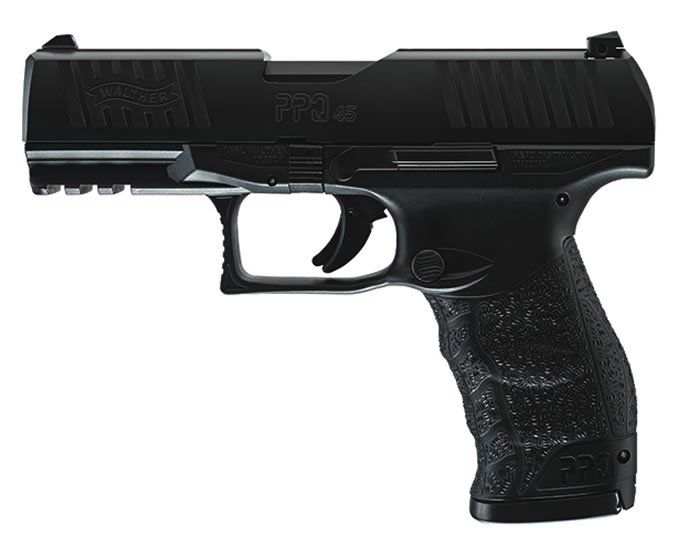 Walther’s new PPQ in 45 ACP is the first true production Walther in that chambering in the company’s history, Walther says. The gun is equipped with the Carl Walther quick defense trigger, traditional front and rear slide serrations, and ambidextrous controls like other PPQs. The PPQ 45 Auto will hit the market and be available in retail stores on October 1, 2015.

Cyndi Flannigan, Walther Arms’ vice president of sales and marketing, says of the new pistol, “This new caliber and product offering is a benchmark for Walther and the PPQ. We have built it to the same exact German standards that have made this model so well received, and it is a superior choice for home defense and personal protection.” We’ll soon see about that.

The PPQ 45 is a striker-fired polymer-frame pistol with a factory-claimed 5.6-pound trigger. If that proves to be true, it will be one of the better out-of-the-box triggers we’ve tested. The new PPQ 45 has three safeties, a mil-spec Picatinny rail, an overall length of 7.4 inches, a magazine capacity of 12 rounds, and a polygonal-rifled 4.25-inch barrel.

Up until recently, 22 Long Rifle ammunition has been hard to find and expensive, so a company created the Sharpshooter’s 22 Reloader kit that supposedly allows you to load your own 22 Long Rifle ammo and lower your cost to about 80 cents per box of 50, or $8 per brick.

The Sharpshooter reloader kit includes a tool to cast, cut, and crimp your 22 Long Rifle ammo. Additional tools include the primer cleaner and packer, primer funnel, measuring tool, and eyedropper. They also sell priming compound, or they show you how to make your own using matches or capgun materials.

For more information, visit 22LRreloader.com. If you’ve used the kit, please send us an email and let us know how you like it.

Turnbull Restoration & Manufacturing Co. of Bloomfield, New York will have a new pistol in the lineup for 2016. The Turnbull 1911 Commander Heritage will be the newest member of the Turnbull family of 1911 pistols, joining the BBQ line as well as Turnbull Commander Custom. The new pistol, in keeping with 1911 tradition will be available in 45 ACP.

“The 1911 is genuinely the most beloved and known pistol design in the world,” said CEO and Founder Doug Turnbull. “Over the years, we have worked to improve the inner workings while maintaining the look and feel of the classic original. The new 1911 Commander Heritage does just that.”

The 1911 Commander Heritage will feature a 4.25-inch barrel in an overall 8-inch-long pistol and weigh in at 34.5 ounces unloaded and 42 ounces fully loaded with seven rounds in the magazine and one in the chamber. It also carries double-diamond deep-checkered walnut grips and Novak 3-dot sights and will come with 2 magazines.

Customers will have the option of upgrading the sights and ordering custom serial numbers and custom engraving on their guns. MSRP on the Turnbull Model 1911 Commander Heritage starts at $2850 and is expected to start shipping in February 2016. All components are made and assembled in the U.S.A. Check Turnbullmfg.com for more information on the gun.

Turnbull is also providing Negrini luxury gun cases for the new Turnbull BBQ series of 1911 pistols. The cases will come with every new BBQ 1911 for no extra cost, or they will be available for purchase for $280. The brown Italian leather cases by Negrini are fitted specifically for the BBQ pistols to hold and protect the pistol and magazines in transit. The outside leather and inside fabric carry the Turnbull logo. The double-wall designs are travel certified and feature dual number 3-position tumbler locks. Negrini cases are made by IntelCase Company in Quistello, Italy. Check Negrinicases.com for more information.