Sig’s P229 Sport pistol seems to us to be more of a ‘Make It and They Will Buy It’ creation than one resulting from market pressure. We suspect it was designed to appeal to the recreational shooter who enjoys having something different to show off during occasional visits to the local club range. The P229 Sport, although not a mainstream competition pistol, is worthy of attention as an example of what a major player in the firearms industry can do to advance the art of gun making.

The standard Sig P229, with its aluminum frame and blackened stainless steel slide, was considered a pistol with a limited lifetime. The new P229 Sport, modified with a machined stainless steel frame and slide, on the other hand can now be considered a lifetime handgun. The rugged pistol pays for its improved service life with an increase in weight (empty) over the standard model of 31 ounces to 44 ounces.

Choosing to chamber the P229 Sport in its high velocity .357 Sig cartridge, Sig undertook a major effort to showcase the cartridge in an attempt to boost its acceptance by the shooting public.

The Pistol
The Sig P229 Sport is a all-stainless steel semiautomatic recoil-operated pistol with a traditional double/single action trigger. Standard features include a 4-inch barrel with a one-port compensator, adjustable sights and two 10-round magazines with extended floorplates that act as a grip extension. The Sport is only chambered for the .357 Sig cartridge. Although it is based on the standard Sig P229, once you get up close and personal, the re-engineering by Sig is impressive.

Retailing for $1,300, the P229 Sport we acquired was very nicely finished. The stainless steel frame and slide had a matte finish, which was perfectly applied without any visible imperfections. The comp-ensator attached to the muzzle end of the barrel was a cast aluminum unit with a dull silver finish that was lighter in color than the slide. The trigger, takedown lever, slide release, magazine release button and decocking lever had a matte black finish that contrasted well with the stainless steel finish. The one-piece black rubber grip panel, which wrapped around the back of the grip frame, had textured sides. It was perfectly fitted into the frame at several locations. The bottom of the grip panel extended downward past the bottom of the frame and provided a nice transition to the extended floorplate of the magazine.

In our opinion, the Sig’s workmanship was excellent. No tool marks were noted on the interior of the slide or frame. The only sharp edge was on the exterior, top right of the barrel’s chamber. Moving parts had a minimal amount of play and fit snugly. A nice touch, to help shooters control the powerful .357 Sig, was the horizontal serrations cut into the front of the grip frame and the front of the trigger guard. The serrations were functional and attractive.

The P229 Sport’s controls were placed to favor the right-handed shooter. Our southpaw shooter found the extended magazine release button, located at the left rear of the trigger guard, interfered with the placement of his trigger finger. Although most left-handed shooters adapt quickly to this type of engineering oversight, it was annoying. We think it would be a major factor against purchasing this handgun by a left-handed shooter.No inadvertent magazine releases occurred during our test.

The decocking lever, positioned on the top left of the frame, was easy for both right- and left-handed shooters to depress. The slide catch lever, located just behind the decocking lever, worked positively. There were no external shooter-operated safeties. The Sport didn’t have a magazine disconnect device, so the pistol could be fired without a magazine being inserted. The disassembly lever, located on the left center of the frame, pivoted smoothly downward for field stripping.

Weighing in at 44 ounces, the P229 Sport was a handful. Our shooters rated balance and pointability as excellent. The Sport balanced extremely well, without being overly muzzle heavy, and was quick and dead-on when pointed. The frame’s excellent ergonomic shape accommodated almost all size hands. Those with smaller hands had to adjust their grip to reach the trigger while in double action mode. However, once in the single action mode, even the smallest hands could readily reach and stroke the trigger.

The biggest surprise when firing the Sport was its mild felt recoil and lack of muzzle jump. The combination of the pistol’s 44 ounce weight and the very efficient compensator resulted in felt recoil associated more with reduced-power target pistols than a high velocity handgun. Mild was the best term our shooters could think of to describe it. On the other hand, muzzle blast was loud.

In our opinion, the movement of the P229 Sport’s trigger was very good. The double-action pull was smooth and consistent from beginning to release, which required only 11 pounds of rearward pressure. After some minor takeup, the smooth single-action pull released cleanly at 3-3/4 pounds. Overtravel in both modes was very minor. The ungrooved trigger was nicely curved and had smooth edges. It was very comfortable for our testers.

The open sights on the Sport were made by LPA of Italy. The front sight was a tall 1/8-inch-wide blade with a recessed white dot. It was dovetailed to the top of the compensator. The face of the front blade had a slight forward angle that made it difficult for some of our shooters to focus on when strong light was coming from the rear. Also, the white dot’s recessed hole collected some dust, possibly from the compensator, and became a distraction to the shooter’s eye. The large target-style rear sight had a 1/8-inch-wide notch and two white dots. It was fully click-adjustable for windage and elevation. The dots made the sights easy to acquire, but were more of a distraction than an aid during accuracy testing.

During the firing phase of our test, the Sport constantly failed to feed with Federal 150-grain jacketed hollow points for one of our shooters. However, this problem may have been due to the shooter not keeping his wrists locked. Otherwise, all three types of ammunition used functioned without any problems. The slide cycled in a very positive manner. Empty cases were extracted smoothly and ejected forcefully to the right rear.

The Bottom Line
With a $1,300 price tag, this production pistol is more like a custom-made handgun. This high performance easy-to-shoot .357 Sig performs too well to become a display item. However, the handgun’s high price makes it a big investment that may rarely see the range. Despite a few minor design problems, we recommend it for those who can afford it. 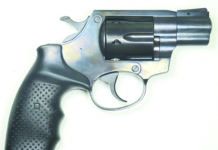 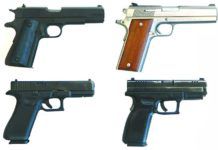