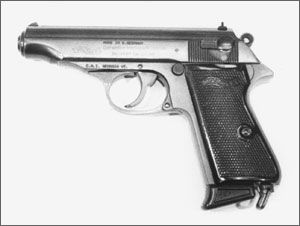 As the story goes, James Bond’s Beretta failed to fire during one of his cloak-and-dagger adventures. As a result, he was given a Walther PPK before undertaking his next crusade against a master criminal out to ransom the world. Thanks to the Ian Fleming books, the PPK, along with the vodka martini (shaken, not stirred), attracted a great deal of public interest. This interest was enough to encourage the gun-control wackos to lobby against the PPK’s importation.

The wackos won and the gun was banned in 1968—but only in .32-caliber. The PPKS was produced to circumvent the

ban. Thus evolved the gun under discussion here, a “legal” PPK—the PPKS, a PP with a slide from the PPK—with twin grip panels and chambered for the short 9 millimeter (.380). This one came in from Century Arms (802-527-1258), but Walthers are now officially distributed in the U.S. by Smith & Wesson. I believe, in fact, they are manufactured by Smith & Wesson in Holton, Maine.

In a moment, you’ll notice that in addition to the usual schematic drawing (on page 4) there is a small section of another schematic on page 5. The larger drawing is the P-Series Walther I’m working with here. The smaller drawing shows a pertinent area of some other P-Series pistols and their clones that I’ll address as it comes up. The main drawing shows a hammer strut pin (#22). The secondary drawing does not, but it’s in there anyway. Neither drawing indicates the possible presence of two studs that may be present in the frame as retainers for the cocking piece. If these studs happen to show up in a Walther P-Series that comes your way, either one can be dislodged from inside the magazine well. Once that’s done, insert a punch through the frame in the just-vacated hole and push out the remaining stud.

Bottom line: If I refer to a part number you don’t see on one parts list, look for it on the smaller drawing. Believe me, if there weren’t so many variations on the P-Series I’d never have considered doubling up on you this way. I felt, however, inconvenience in reading would be forgiven, while any confusion on the bench would be avoided.

Field Stripping
Eye protection on, chamber checked, and magazine out as usual? Good. Get a firm hold on the pistol with your index finger extending forward along the side of the triggerguard. Use your free hand to pull down the front of the guard and press it sideways so it misaligns with the frame. Keep it misaligned and ease it upward to contact the frame. More often than not, the guard will make every effort to reenter the frame, giving any flesh in its way a serious pinch. I’ve found that two small strips of duct tape placed parallel to the frame slot upon which the end of the guard can come to rest greatly reduces this painful possibility. Any adhesive residue the tape leaves on the pistol can be removed with mineral spirits.

Now grasp the slide by its grooves with your free hand. Retract it fully until you can lift its back end off the frame. Now ease the slide forward, controlling any desire of the recoil spring to rip it from your fingers, and remove it. Slip the spring off the barrel.

Detailed Disassembly
Excepting their respective sizes, whether they have one- or two-piece grips, and whether they include a mainspring plug or a mainspring-retaining bar, Walther P-Series are taken down identically.

Most P-Series Walther pistols, except the .22-caliber ones, have a loaded-chamber indicator (#36). This part has a groove or notch in its center. Place a punch in there and push the indicator to the rear of the slide. Use your locking pliers or smooth-jaw pliers to hold it there while you ease the indicator and its spring (#37) upward and out of the firing-pin channel.

There’s nothing left to do with the slide, so move on to the frame. Remove the grip screw and grip(s). Lower the hammer but don’t let it slam into the frame. Push the rear of the ejector (#12) and spring (#11) inward. (The ejector also serves as a slide stop.) This inward pressure should raise the stud end of part #12 away from the frame, and you can lift the ejector/spring out as a unit.

Secure the frame with its back strap upwards in your padded bench vise. If the gun is equipped with a mainspring-retaining bar (#31), use your locking pliers to press the retainer down and lift it away from the frame. On some PP models, the one here among them, the retainer isn’t present. A plug, shown in the large schematic as #19, replaces it, and is held to the frame by a pin (#17). Removal of the pin is approached similarly to removing the mainspring pin in an M1911. Depress the plug slightly by pressing it down on your bench top and drive out the pin. You’ll have to exert some control against the pressure of the mainspring once the pin is gone. With plugs like the one in this Walther, I prepare for them by installing a permanent, 1/8-inch-diameter hardwood-dowel “nub” in my bench, and pressing the plug down against the nub.

In any case, removing the retainer bar or spring plug releases the mainspring (hammer spring). Note that this spring is identified as #30 in one drawing and #20 in the other. The hammer (#23) and hammer strut (#21) remain in the frame for the moment on retainer-bar models. The strut will come out with the mainspring on plug models.

Removing the Walther’s cocking piece can be a minor challenge. The part must be rotated so the large “shelf” at its rear faces the corresponding hammer cutout. The piece is then rotated so its right side can slide from its frame slot and be taken out of the gun to the left.

The sear (#26) is attached to the hammer by its pin (#24), and is under pressure from the sear spring (#25). Place the hammer on your bench block and drive out the pin to separate the sear and sear spring from the lower hammer body. Be very careful not to lose the spring or the sear. The latter is most likely a restricted part—unavailable to anyone except factory technicians.

Still using the bench block, drift out the trigger pin (#7), after taking a close look up into the frame to see how the groove in the pin interfaces with the trigger spring (#5). Remove the trigger downward. Slip the triggerguard back into the frame by pushing it toward its frame slot. (Keep your fingers clear of entrapment while doing this or they’ll get badly pinched.) Secure the pistol horizontally, right side upward, in your bench vise between the bottom of the guard and the top of the barrel breech. I’m mentioning this to make removal of the magazine catch (#8) easier for you than it was for me the first time around. Because the pistol is being held in the vise as just described, you will be able to drift out the triggerguard pin (#10) with little trouble, and push out the catch with no trouble at all.

Immediately after removing the triggerguard pin and catch, place a finger over the triggerguard plunger (#15) and release the pistol from the vise. The plunger is retained by the guard pin. When you take your thumb off the plunger, both it and its spring (#14) will be expelled abruptly from the frame, and you can reopen the triggerguard. If they’re not expelled, you have a problem with a dirt-encrusted or damaged spring, and may have to go fishing for them.

Push down on the top end of the hammer-block plunger (#31), move it to the right, and lift it from its frame recess. This allows you to pluck out the hammer-block spring (#30) and the hammer release (#29), leaving the frame buck naked.

Reassembly Tips
The cocking piece is the first to return to the frame along with its retaining studs. The rear of the trigger bar is inserted into the cocking piece, and held there with one hand as the other opens the triggerguard as far forward as possible.

Leave the pistol in the vise to reconstruct the magazine catch, triggerguard plunger, and plunger-spring assemblies. The back end of the catch has a flat area, and that is the only way it will go back into the gun. The plunger and spring are inserted, then compressed, and the triggerguard hinge pin reinstalled before releasing the plunger.

After reassembling the sear, sear spring, and sear pin to the hammer, align the hammer and hammer-release holes with the frame, and secure all with the hammer pin. For models with spring plugs, the hammer strut is installed before the hammer. For retainer-bar models, secure the frame (with the magazine well upwards) in a padded vise, position the strut, and slip on the hammer spring. Use the locking or smooth-jaw pliers to firmly grasp the retainer bar, impale it on the strut, compress the spring, and seat the bar.

Easy? Not exactly—a few attempts will probably be needed to get it right. Whether plug- or bar-retained, though, the upper notch on the hammer strut has to be engaged with the hammer-strut pin and remain so when you’re finished putting the pistol back together.

The Walther PPK has many imitators. They all take down and reassemble as described here, because their parts are the same. Does that mean it’s okay to use an imitator’s parts in your customer’s PPK? I’ll give you a qualified answer to that question: Some cloning operations use fairly flimsy material, with machine finishes that look like they were applied by a cat sharpening it claws.