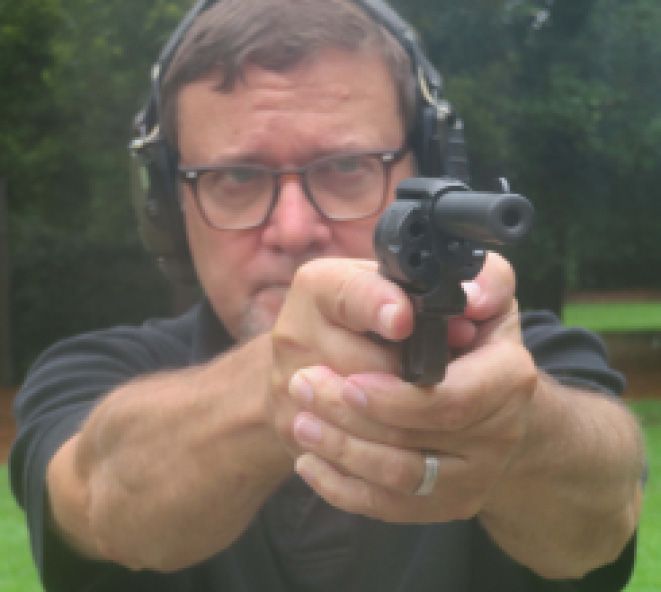 We have tested a variety of 22 LR Single Action Army (SAA) revolvers in the past, and those six-shooter revolvers have been the traditional models with 4.75- or 6.5-inch barrels. In this match-up, we wanted to look at shorter-barrel SAA revolvers in 22 LR. So we gathered two Heritage Manufacturing Barkeep models and two Ruger Shopkeeper revolvers. These pistol designs share a similar idea: Abbreviated barrels.

Ever since SAA revolvers were invented, gunsmiths have lopped off a good portion of the barrel to make the pistol easier to carry as a back-up gun. In fact, Colt made centerfire Sheriff models with short barrels and without the ejector rod, and a centerfire 4-inch-barrel Storekeeper’s model with an ejector rod. In the recent past, a variety of SAA manufacturers and importers have introduced short-barrel SAA revolvers.

The assembled SAA rimfire revolvers are at polar opposites are far as price is concerned. The Heritage Mfg. Barkeep models are under $200, and the Ruger Shopkeeper models are about $500 to $575. That’s a difference of $300 to $375 if we do the math correctly. We know what you are thinking: Are the Ruger models worth the extra coin?

Where the four revolvers are similar is in chambering, size, weight, barrel lengths, and sights. The Heritage Barkeeps and Ruger Shopkeepers are scaled down so they fit adults as well as small-stature shooters. All of these rimfire revolvers had similar barrel lengths between 2.6 and 3.5 inches and traditional SAA sights, consisting of a front blade and a rear groove notch. Grip style is where the Barkeep and Shopkeeper revolvers differ. The Barkeep models have a traditional SAA grip, while the Shopkeeper models have a smaller bird’s head-style grips. We have gripes about the grips, as you’ll read below. All four are smart-looking revolvers with different finishes that vary in execution.

We think three of these compact SAA revolvers would make fun plinkers. The Rugers are small enough to drop in your back pants pocket or coat pocket when taking a stroll or walking the woods. Tin cans and paper targets don’t care what we use to shoot at them, but as shooters, we care, a lot.

Burning through a bunch of 22 LR ammo, we found all four pistols performed well, though we did find the Rugers more user friendly due to their ejector rods. Sticky empties did not fall free from any of the guns, but a rod with a wood handle, which comes with each Barkeep, helped eject stubborn cases. We tested three flavors of ammo: Remington Thunderbolt with a 40-grain lead round-nose bullets, Winchester Xpert High Velocity rounds with 36-grain hollow points and some zing, and a 38-grain LRN from CCI Blazer. These rounds have a range of velocities and bullet weights and styles, from target rounds to hunting rounds. We had issues loading the Winchester ammo in the Rugers, but not in the Heritage guns. Using our range bag as a rest and firing five-shot groups at cardboard targets, we tested for accuracy at 15 yards. Both Rugers and one of the Heritages shot to point of aim, which is a requirement for a fixed-sight revolver. One of the Barkeeps shot to the left, which doomed it in our eyes. Still, we thought there were some “keepers” in this group.

This Barkeep featured the 2.6-inch barrel, a faux case-hardened finish, and textured wood grips. We have to admit it looked pretty sharp. Also in the cardboard box was a wood-handle rod, which is used to eject spent cases from the chambers. You need this rod, so don’t lose it. The finish on the Barkeep can best be described as thin. For the cost, we won’t complain, and we’ll cover any shiny edges that wear through the finish with a Sharpie pen.

The barrel and cylinder are made of steel, and the frame and grip are made of a lightweight alloy called Zamak 5. This alloy gives the Barkeep its light weight of only 26.6 ounces unloaded. The grip was fitted okay, but it was still overlapping the grip frame in spots. In a centerfire big-bore revolver that wouldn’t be acceptable because these edges abrade your hand during recoil. In a 22 LR, we give the Barkeep a pass on this because recoil is nil. We did find the grips wiggled ever so slightly. We tried tightening the grip screw, but there was still a very slight wiggle. Again, we’ll give the Barkeep a pass on this because it is so inexpensive, and you get what you pay for, as the saying goes.

The action is similar to a traditional SAA except there is a hammer block built into the left-side recoil shield. This prevents the hammer from contacting the firing pin, which is built into the frame. The safety does not look traditional at all for a SAA. Flip it up and it blocks the hammer; flip it down and you can fire the pistol. Best practice is to carry the Barkeep with an empty chamber under the hammer. So load a chamber, skip a chamber, and fill up the rest of the chambers.

There are four distinct clicks when thumbing back the hammer. The first click is a “safety” notch. The second click is the loading notch. In this position, the cylinder spins freely one way and can be loaded via the loading gate on the right side of the frame. Cock the hammer through the third notch to the fourth notch to fire the Barkeep.

The sights consisted of a blade front and a groove in the frame top strap. The Barkeep disassembles like a traditional SAA. Place the hammer on the second loading notch, open the loading gate, and push the base-pin button while pulling out the cylinder rod. The cylinder then falls out of the loading-gate side of the frame.

The loading gate was scaled down in size, so there was not a lot of room to load the tiny 22 LR cartridges in one of the six chambers. The chambers were not counter sunk.

In hand, you can tell this SAA has been scaled down, but not so much that a larger-handed shooter will have difficultly with it, nor would a small-stature shooter. The hammer at full cock did not interfere with the shooter’s grip.

The checkering on the hammer spur had good texture, and we did not experience any thumb slippage. The skinny traditional SAA trigger had some creep before it broke at 3.7 pounds on average. We liked the pull weight.

At the range, we discovered the inexpensive 40-grain Remington Thunderbolt ammo produced the best five-shot group, which measured 0.80 inches. With the CCI Blazer 38-grain LRN and the Winchester 36-grain HP, best groups increased to 1.14 and 2.88 inches, respectively. On average, all ammo grouped between 1.2 to 3.31 inches. The Barkeep also shot to point of aim at 15 yards. The muzzle blast was more pronounced because the barrel is so short, but you can fix that with ammo. The Barkeep is also compatible with 22 Long, 22 Short, 22 CB, and 22 BB ammo. 22 LR shot cartridges, too. What we also like about the Barkeep was we could purchase a 22 WMR blued cylinder for only $30 from ShopHeritageMfg.com. There are also a variety of engraving patterns available, from scroll work and skulls to scorpions and the Stars and Stripes.

When unloading, we needed to use the wood-handle ejector rod on all chambers because the cases do not fall free. Remember to keep your finger off the trigger and your hand away from the barrel when ejecting empties.

Our Team Said: In our opinion, this would make a great training pistol and fun plinker. We found ourselves stuffing more and more cartridges in the Barkeep. It can be addictively fun to shoot. We did not care for the ill-fitting grip panels and thin-looking finish, but the 2.6-inch Barkeep did shoot to point of aim, was fairly accurate, and dare we say, inexpensive. The economical price makes us overlook the issues. To drive the point home, the economically minded shooter could buy two Barkeeps, an extra 22 WMR cylinder, and ammo for the cost of one Ruger.

To collect accuracy data, we fired five-shot groups from a bench using a rest. Distance: 15 yards. We recorded velocities using a ProChrono digital chronograph set 15 feet from the muzzle. 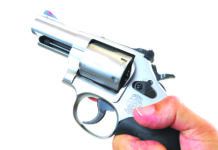 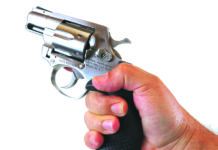 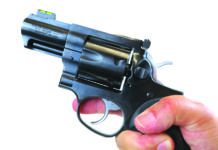