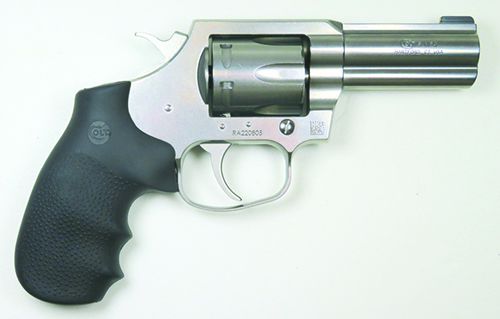 The new King Cobra is different from the original King Cobra models made from 1986 through 1992. Unlike the original King Cobras, which were closer in size and proportion to a Smith & Wesson L-­frame, the new model is lighter and more concealable. It also has fixed sights; original King Cobra revolvers had an adjustable rear sight. Our sample wore a semi-bright stainless finish, which we thought was well executed. The trigger guard is flat on the bottom edge and gives the revolver a distinct look. The King Cobra shares many parts with the new Cobra, including its internal lockwork, grip and sights. It uses a leaf mainspring design, which is better than the coil-spring arrangement found on vintage King Cobras. The DA trigger exhibited no stacking effect and was very smooth and consistent. Pull weight was just over 8 pounds, which we liked. The trigger was narrow and smooth. We would have preferred the trigger to be a bit wider. The hammer spur was narrow and as wide as the hammer. The serrations on the spur worked well. The King’s hammer was easy to cock, with no slippage. The firing pin is captive in the frame. The internal safety is a transfer-­bar system, so the trigger needs to be fully rearward to allow the hammer to hit the transfer bar, which then hits the firing pin. 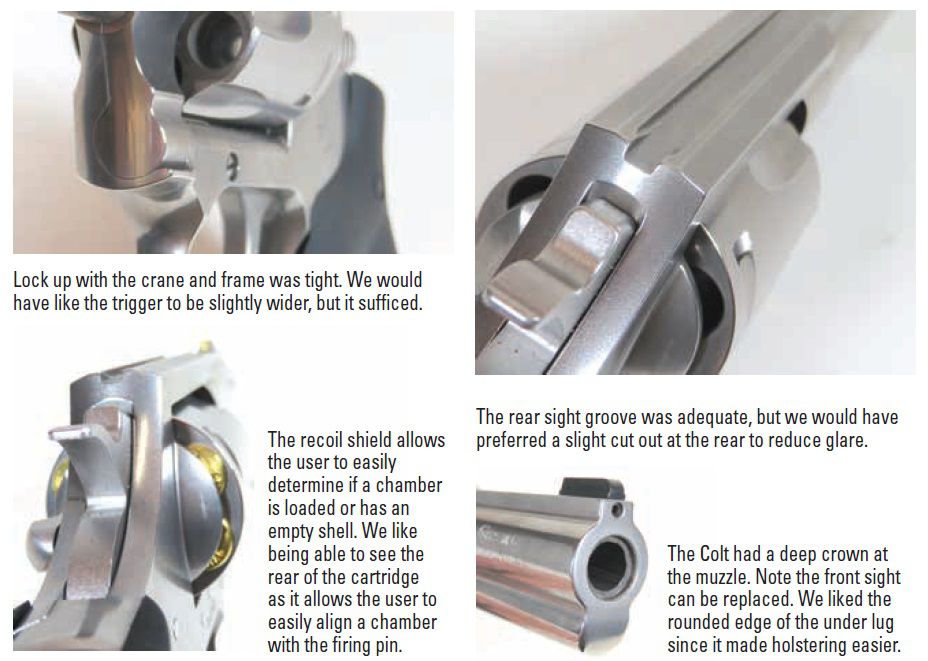 The barrel is one-­piece, machined from stainless steel, with a deeply recessed crown at the muzzle. The top side of the barrel is milled flat. It features a full lug that adds weight, which is a check in the pro column when it comes to recoil, but also a check in con column because it adds weight. The front of the barrel and lug were rounded to aid reholstering, and the barrel was nicely mated to the frame with all smooth edges. The front-sight post is pinned in place and wears a brass bead. The rear sight is a groove milled in the topstrap. The top side is also bead blasted for a matte finish. We felt these sights were well suited for the intended purpose of self defense. The sights were large as well as smooth and snag free, which is also appropriate in a concealed-carry weapon. The grip is a one-piece Hogue Overmolded model with finger grooves, a pebbled texture and round butt. In our opinion, this grip was good for concealed carry and helped with recoil. All of our fingers had space on the grip and didn’t leave our pinky finger dangling. The cylinder latch is pulled back to swing out the cylinder, the opposite of an S&W-style revolver. Also note that the cylinder rotates clockwise, or into the frame. A S&W and the Rossi and RIA rotate counter clockwise. This is important to remember when trying to line up a specific chamber with the firing pin. The Colt’s cylinder locked only in the rear. The ejector rod was knurled. The crane was tightly mated to the frame, and there was only slight wiggle in the cylinder. We did note the recoil plate allowed the user to see if a chamber was loaded or had an empty case. We like this feature, especially when you want to align a certain chamber.

In our opinion, the Hogue grip with finger grooves and crisp SA trigger allowed us to shoot the King Cobra accurately. Our best five-shot group measured 1.2 inches and was fired with SIG 38 Special +P ammo loaded with a 125-grain JHP. The grip also helped to dissipate recoil in the palm of the hand. With 38 Special and 357 Magnum ammunition, our average groups measured 1.9 and 1.8 inches, respectively. As mentioned, we saw an 11- to 17-percent increase in velocity and energy with the King’s longer 3-inch barrel. We also found carrying the King took more effort, and it wasn’t as easily concealable due to length. In DA mode and using a two-hand grip, we found the revolver was easy to control, even with a bit of flip and recoil with magnum loads. We had no issues shucking empty brass. Our Team Said: The King Cobra performed well and would be our choice of these revolvers tested if price were not an issue. We liked the sights and trigger, which helped us shoot the King Cobra well. The King Cobra offers better ballistic performance due to the longer barrel, but that is at the cost of a larger package that is less easy to carry concealed.