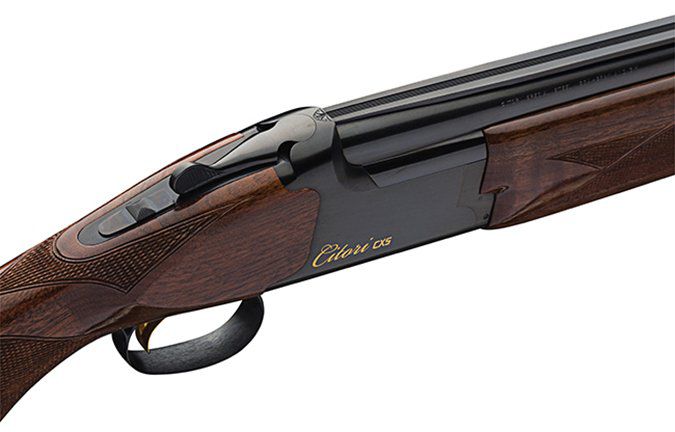 “The gold-enhanced receiver engravings and Grade V/VI walnut stocks exude class and workmanship,” said Gun Tests Editor Todd Woodard. “The receiver has a silver-nitride finish and a Fire Lite Mechanical trigger system. Offered with 26- or 28-inch barrels, these new models are supplied with a canvas/distressed leather fitted case.” The company tells us these gun will list at $6000.

The new Citori 725 Golden Clays Trap 12-gauge over/under features gold-accented engraving on the right, left, and bottom of the receiver, and a silver-nitride finish. The stock and forearm are grade V/VI walnut with a gloss-oil finish, close-radius pistol grip, and palm swell. A Pro Fit Adjustable Monte Carlo comb and adjustable GraCoil Recoil Reduction System, with a Graco buttpad plate that adjusts for angle and location, are standard. Available with 30- or 32-inch barrels, Browning has introduced precision-rifle adjustability to the shotgun world. SRP: $5740.

The Citori CXS and Citori CXT Adjustable Comb models are multipurpose over/under 12-gauge shotguns for various target-shooting endeavors. The CXS features a blued finish receiver with gold-accented engravings. The ported barrels are topped with a floating rib, and the stock and forearm are gloss-finished Grade II American walnut, with an adjustable comb and Schnabel-style forearm. The CSX is intended as a crossover shotgun for hunting, sporting clays, and skeet. SRP: $2540.

“I can see putting these models in a head to head test with some other similarly configured over/unders,” Woodard said.

The new CXT has a blued receiver with gold-accented engravings. The barrels feature a high-post floating rib and ventilated side and top ribs. The stock and forearm are gloss-finished Grade II American walnut, with an adjustable comb and semi-beavertail forearm with finger grooves. Intended for trap, the CXT is supplied with three Midas Grade choke tubes with 30- or 32-inch barrels. SRP: $2600.

Woodard said CZ-USA’s most affordable over/under shotgun gains two sub-gauge variants for 2018. Identical to the larger shotguns, but in 28-gauge and .410-bore, these diminutive shotguns are built on steel CNC actions, have a mid-rib, and are clad in Turkish walnut stocks. SRP: $679.

CZ’s 3-inch Swamp Magnum looks mean and serious, and now with shorter 26-inch barrels and extended choke options, the Reaper Magnum gives the turkey hunter the ability to choose a tight choke for long shots and an open choke for closer shots.

Woodard said, “With a drilled-and-tapped top Picatinny-style rail, mounting an optic is easy. The polymer stocks are clad in Realtree Xtra Green to help them blend in the world of the turkey. SRP: $959.”

Given the popularity of its Hammer Coach, CZ-USA brought out a hammerless version. Built on the Sharp-Tail platform, the Sharp-Tail Coach is a single-trigger coach gun with 20-inch cylinder bore barrels. It is available in 12- or 20-gauge. SRP: $959.

“As we reported a few months ago, when the BATFE confirmed the 590 Shockwave does not fall under NFA restrictions and requires no tax stamp, the world of shotguns changed and a floodgate of interest opened,” Woodard said. “The Shockwave comes with a 14-inch heavy-walled barrel and has a 5+1 capacity. New options include a 20-gauge version and a flat dark earth Cerakote finish, and a 12-gauge JIC (Just In Case) model that comes with a water-resistant storage/carry tube. SRP: $455.

Standard features of the Mossberg 930 shotgun include a smooth-operating dual-gas-vent system, a drilled-and-tapped receiver, an ambidextrous safety, and a stock-drop spacer system. The 930 handles 2.75- and 3-inch shotshells with ease, and the new versatile 26-inch-barreled Bottomland model comes with an expanded choke-tube set for both turkey and waterfowl. SRP: $560. The 28-inch-barreled black synthetic stock version makes a great choice for upland and waterfowl hunting. SRP: $560.

All SA-20 and SA-28 International Bantam shotguns come with a 12.5-inch length of pull and are popular with young and small-statured shooters. For 2018, Mossberg has three new offerings. The Walnut Youth comes in 28- and 20-gauge and has a 28-inch barrel with a ventilated rib. It weighs only 6.25 pounds. SRP: $570. The Black Synthetic Youth is now available in 28-gauge and also has a 24-inch ventilated rib barrel. It weighs only 5.5 pounds. SRP: $674.

Known as the workingman’s shotgun, Mossberg has three new Mavericks from which to choose. First is the six-shot Cylinder-bore 18.5-inch-barreled standard model with a flat dark earth stock. Next is a similar eight-shot version, but with a 20-inch barrel. And finally, there’s the six-shot, 18.5-inch model that comes with an ATI ShotForce folding stock, and weighs only 6 pounds. SRP: $296.

Mossberg is treating those who like a little flair in their firearms with several shotguns finished in the newest Muddy Girl camo pattern. There’s the Model 500 20-gauge Super Bantam, with its adjustable length-of-pull system and 22-inch ventilated-rib barrel. And there’s the 510 Mini-Super Bantam, with the same length of pull adjustability, but with an 18.5-inch .410-bore or 20-gauge barrel.

Woodard said, “All weigh less than 6 pounds and come in the Serenity Muddy Girl camo pattern.”

Rock Island Armory is rolling out 20 new shotguns this year, Woodard said. “They include one pump-action, four break-actions, and 15 semi-auto variants. The pump is an 18.6-inch-barreled smoothbore slug gun with a synthetic stock.”

The semi-auto magazine-fed VR-60 is now offered in a range of colors, from tactical black and sand to rosy red and combinations.

Woodard said, “This wicked-looking shotgun resembles the AR in profile and weighs about 8 pounds, depending on variation. It will handle 3-inch shells.”

And, Rock Island will produce the 5+1 magazine-fed Bull Rocket. This is a 12-gauge semi-auto bull-pup design with a 20-inch open-Cylinder barrel.

“We’ll look at producing a feature with this bullpup against the TS-12 from IWI,” Woodard said.

Notable features on the new Viper 410 shotgun include a beautiful Turkish walnut stock, a fiber-optic front sight, and a bronze finish. Out of the box, it weighs only 5.7 pounds.

Winchester expanded the Super X4 semi-auto shotgun line to include the SX4 NWTF Cantilever Turkey model. It comes with a 24-inch barrel and a Weaver-style cantilever rail that makes it easy to attach an electronic sight or scope. This 3-inch model features a synthetic stock and forearm with full coverage in the non-glare Mossy Oak Obsession. A Truglo fiber-optic front sight and adjustable rear sight are standard. SRP: $1,070.

Produced in association with SHOT Daily at the 2018 SHOT Show. 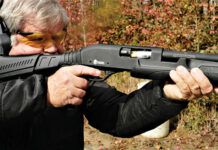 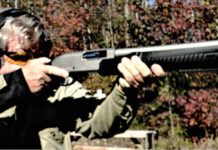