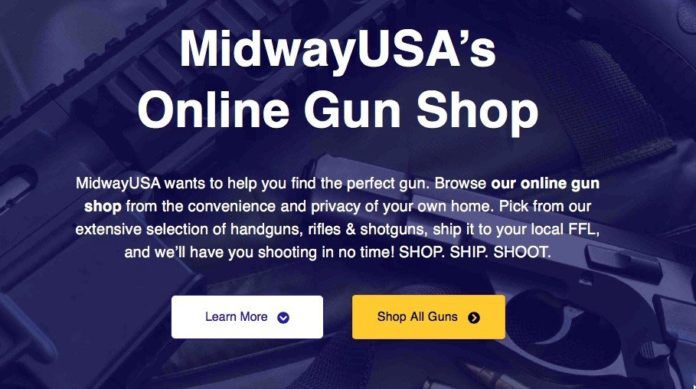 MidwayUSA.com has announced that the company is now selling firearms. This makes the national availability of firearms even more competitive — and presumably better for customers, according to Gun Tests Magazine.

“National firearms and firearms-accessory retailers have made price- and model-shopping for rifles, shotguns, pistols, and revolvers even easier,” says Todd Woodard, editor of Gun Tests magazine. “It’s not quite to the point that Amazon has begun selling firearms, but the competition for online sales should drive prices down and make availability even better.”

The latest company to join the gun-selling business online is MidwayUSA, which started as a gun shop 41 years ago, but which was more recently known for its ammunition and accessory sales.

“We’re proud to offer guns to our customers again,” said Josh Costello, merchandising manager for gunsmithing at MidwayUSA. “We’ve made it incredibly easy to shop for guns online, and we know customers will love our wide selection of handguns, rifles and shotguns at great prices.”

Woodard noted that Brownells, a head-to-head competitor with Midway, began selling guns in November 2016. Other major online gun-sellers include BudsGunShop.com, Cabelas.com, and CheaperThanDirt.com, plus a host of others cited in the magazine.

“Your state rules may differ and there may be specific knock-outs for certain types of firearms,” Woodard said, “but, generally, buying firearms online is perfectly legal and very easy.”

He said the online companies offer a range of products by class, which the consumer selects and buys with the online retailer. The retailer then ships the purchased item to a Federal Firearms License holder near the customer. The FFL generates the retail BATF Form 4473 and does a NICS check prior to releasing the firearm to the customer, he said.

Contrary to what some anti-gun groups say, there is no online “loophole” in which firearm sales don’t generate NICS checks.

“Frankly, this is a great way to purchase a firearm if you know what you’re looking for,” Woodard said. “The product representation of the online retailers is generally excellent, allowing the customer to shop for specific models, chamberings, and finishes in seconds.

“Further, if you have a recommendation from Gun Tests, then you can search the websites for the model number or SKU listed in our stories.”

Woodard recommended that buyers pay attention to the add-ons necessary to complete the transactions, including shipping fees and receiving fees.

“In Houston, I recently used 2nd Amendment Arms and Ammo to receive a shipment from BudsGunShop.com,” Woodard said. “Matt Jackson, the owner, was listed as a receiving FFL for Buds, so he logged in the 22 bolt actions and did the 4473 paperwork for me for only $10 per gun, because I have a Texas LTC.

“There are a lot of stores that charge $25 to $45 to do the same thing, which makes the gun purchase much less of a bargain.”