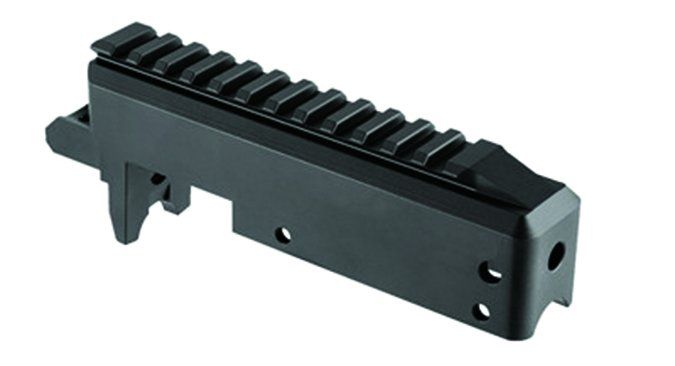 Brownells recently rolled out the BRN-22 Receiver for custom rimfire rifle builds. The BRN-22 is fully compatible with the popular Ruger 10/22, so you can choose from the many barrels, stocks, triggers, and other custom components for the 10/22 platform. According to the Brownells website, the BRN-22 receivers are machined from 6061 aluminum billet “to exacting tolerances.” Brownells touts the machined receivers as better than forged, and points to the smooth, clean interior “to realize that a machined receiver can be held to much tighter tolerances for a precise fit with other parts.”

After machining, BRN-22 receivers get a matte-black Type 2 hardcoat anodized finish. There’s also a pre-drilled cleaning-rod hole at the rear of each Brownells BRN-22 receiver for easy cleaning of the bore from the chamber. The Standard BRN-22 has a factory-style 10/22 top profile, including the same drilled-and-tapped scope mounting holes so it will be compatible with the largest number of aftermarket scope bases and sights. The Railed BRN-22R has an integral Picatinny top rail for scope mounting. And those configurations in the BRN-22T and BRN-22TR receivers are compatible with Ruger 10/22 Takedown barrels, stocks, and accessories. Downside: These are stripped receivers only, or receivers with barrels, and as such, they must be delivered to FFLs. The BRN-22 Stripped Standard Receiver is Brownells #078-000-429WB and sells for $80. The BRN-22R Stripped Railed Receiver #078-000-430WB sells for $90.

This rule change, effective for the upcoming hunting season, will allow pre-charged pneumatic airguns 40-caliber and larger, which produce muzzle energy greater than 400 foot-pounds, to be used in hunting whitetail deer. Additionally, the Arkansas Game & Fish Commission requires that the projectile used in these big-bore air rifles be capable of expansion upon impact with its target. While most states do allow hunting of small game with air rifles, Arkansas is the 10th state that has approved the use of big-bore air rifles for hunting big game species. Richard Turner, president of Umarex USA, said, “The timing is perfect for the introduction of the 50-caliber Umarex Hammer, which we’re making at our facility in Fort Smith, Arkansas.” The Umarex Hammer is a pre-charged pneumatic air rifle that generates up to 705 foot-pounds of energy at the muzzle and has been used on hunts for several large deer species, including red stag, fallow, and axis buck. The 50-caliber Hammer has also been used to harvest an American bison, Canadian black bear, wild hog, African simitar oryx, and wildebeest.

Umarex developed the 50-caliber Hammer to offer hunters an alternative to firearms and archery for the safe and humane harvesting of big-game species. Hunters who can no longer manipulate the draw of a bow or crossbow will be able to continue hunting with the Hammer. This regulation change goes into effect immediately for the 2018 season in the state of Arkansas. Umarex USA is working in conjunction with the Airgun Sport Association and many state regulatory agencies to open big-bore air-rifle hunting in states where it is not currently allowed. The Tennessee Fish and Wildlife Commission announced that starting with the 2018 hunting season, big-bore PCP air guns 35-caliber or larger, such as the 357 Caliber Benjamin Bulldog (shown below), will be legal to hunt deer, elk, and bears during the Tennessee Modern Gun Season. The Benjamin Pioneer Airbow will be legal means to harvest deer, elk, bears, and turkey during the Modern Gun Season for all hunters and during the archery season for disabled hunters.