(GunReports.com) — The 36th edition of the Shooting, Hunting and Outdoor Trade Show (SHOT Show) is ongoing through Friday at the Sands Expo and Convention Center in Las Vegas, Nev. Here are some of the more interesting rifle introductions we’ve seen so far:

Two new modern sporting rifles using a gas-piston operating system enter the SIG Sauer line this year. The SIG516 Carbon Fiber (SRP: $2,504) is chambered for 5.56mm NATO. It features a 7075-T6 aircraft-grade upper and lower receiver with a hard-coat anodized finish, and a 16-inch 1:7-twist six-groove chrome-lined barrel. The gas-operating system is a four-position adjustable short-stroke, advanced push-rod system with a rotating bolt. The action is mated to an A1 carbon-fiber stock with an extended 12-inch free-float carbon-fiber handguard. The match-grade two-stage trigger has a final break of 4.5 pounds. This flattop rifle has a Picatinny rail upper receiver that is equipped with flip-up adjustable iron sights and plenty of room for optics mounting. Overall length is 35.1 inches, and the empty weight is 7 pounds. The rifle accepts all MSR-type magazines. The new SIG556xi Russian (SRP: $1,599) is chambered for the 7.62x39mm. It features a 16-inch chrome-lined barrel with 1:9.5 twist four-groove rifling. It uses a three-position advanced push-rod gas-operating system. A new SIG three-prong flash hider with ½-28 threads caps the barrel. The trigger is a standard mil-spec with a 7-pound pull weight.

New in Browning’s 2014 catalog is the AB3 bolt-action, designed to give consumers a value-packed rifle that has Browning quality and accuracy, but at a more affordable price. The new AB3 will be offered with a composite stock and a matte blued finish receiver and barrel. Other features include a 60-degree bolt lift, detachable box magazine, top-tang safety, bolt-lock override button, free-floating barrel, and an Inflex Technology recoil pad. Average weight is 6 pounds 13 ounces in standard calibers, and 7 pounds 3 ounces in magnums. The new AB3 will be available in .270 Win. and .30/06 Sprg. with a 22-inch barrel length, and 7mm Rem. Mag. and .300 Win. Mag. in 26-inch barrel. SRP: $599.99.

The 455 American Synthetic Suppressor-Ready (SRP: $421) features a 16.5-inch barrel in .22LR that is factory-threaded to accept muzzle devices using ½-28 threads. The stock is black synthetic with a soft-touch finish. The 455 Varmint Tacticool Suppressor-Ready (SRP: $549) sports a 16.5-inch varmint barrel with a factory-cut ½-28 thread pattern that accepts many aftermarket suppressors. The CZ 557 bolt-action is a new addition to the line and a departure from the Mauser-style bolt found on the company’s 550 models. It features a short extractor and plunger-style ejector, commonly called a “push-feed system,” that provides smooth operation with enhanced ejection and also makes it easier to load single rounds into the chamber—a feature many shooters prefer for range work. The new receiver is machined from steel billet, and has CZ’s integral 19mm dovetails for scope mounting. Equipped with a two-position safety, the bolt can be cycled while the safety is in the “on” position. The trigger mechanism is fully user-adjustable to tune pull weight, creep, and overtravel. The 557 will be available in both short- and long-action models, depending upon caliber, and in three distinct model variations.

For 2014 Winchester Repeating Arms will expand its offerings in the Model 1873 to include a new color case-hardened model, along with adding the .44-40 Win. and .45 Colt calibers. The receiver and steel crescent buttplate on the new model have a color case-hardened finish with walnut straight grip stock and forearm in a satin oil finish. This short rifle version of the Model 1873 has a blued round 20-inch barrel with full-length magazine tube, as well as a semi-buckhorn rear sight and a Marble Arms gold-bead front sight. It will be available in .357 Mag./.38 Special as well as the new calibers noted above. SRP: $1,579.99.

The basic MVP Patrol is a bolt-action chambered for 5.56mm NATO and features a 16.25-inch 1:9 twist medium bull barrel. It is available as a straight barrel or threaded for a supplied A2-style flash suppressor. Fed from a detachable magazine, a 10-round magazine is supplied but the gun also accepts standard MSR-style magazines. A Picatinny rail rides atop the receiver, and there is an adjustable rear sight with a fiber-optic front. The LBA trigger is user-adjustable for pull weights of 2 to 7 pounds. The synthetic stock is finished in flat black. Added to that basic MVP Patrol 5.56mm line is the new Model 27709, which is available in a textured tan stock instead of matte black. This version includes the A2 flash suppressor. The big news, however, is the addition of the 7.62 NATO/.308 Win. and the .300 ACC Blackout to the MVP line. Offering all of the standard specifications of the MVP line (synthetic stock, 16.25-inch barrel, A2-style flash suppressor, 10-round magazine), the new Model 27718 is chambered for .300 ACC Blackout. It has a 1:7-twist barrel fitted with the A2 flash hider and a textured black-matte stock. The new Model 27738 is chambered for 7.62 NATO/.308 Win. It features a 1:10-twist barrel with a fitted A2 flash suppressor and a textured black stock. The new Model 27742 is the same gun, but with a textured tan stock.

Celebrating the 50th anniversary of the .223 Remington cartridge, 2014 will see a Limited Edition Model 700 CDL chambered for the .223 Rem. It features a satin-finished American walnut stock with a 24-inch stainless-steel fluted barrel. The trigger mechanism is the X-Mark Pro externally adjustable trigger that is factory-set at 3.5 pounds. “Limited” is marked on the left side of the receiver, and it wears a 50th anniversary commemorative floor plate. SRP: $1,225.95.

On the rimfire side, the big news is the introduction of the Ruger American Rimfire series. This new bolt-action rifle combines features from the centerfire Ruger American line with a number of innovations from the rimfire line. The new rimfire series consists of four models (SRP: $320). The full-size model (.22LR and .22WMR) has a 22-inch barrel. Length of pull is 13.75 inches. The compact version (also in .22LR and .22WMR) has an 18-inch barrel. Length of pull is 12.5 inches. All models feature a composite stock with front and rear sling swivels. Each model in the line has two interchangeable stock modules that provide comb height options for scope or iron sights. Standard models come with the longer length-of-pull stock while the compact models feature the shorter length-of-pull. Changing buttstocks is as simple as removing the rear sling-swivel stud and installing the buttstock of choice (available at ShopRuger.com). All modules are completely interchangeable across all models, so shooters can virtually hand-fit their buttstock.Models chambered for the .22LR feature the detachable, flush-mounted 10/22 BX-1 rotary magazine and accept all 10/22 rifle magazines, including the BX-25 and BX-25×2 magazines. Those models chambered for the .22 WMR use the detachable JMX-1 nine-round magazines. The 10/22 extended-magazine release allows for smooth magazine removal. The 60-degree bolt throw provides ample scope clearance while the receiver-mounted bolt release allows bolt removal without the need to pull the trigger.The American Rimfire bolt-action series also incorporates features of the Ruger American centerfire series, including the Ruger Marksman Adjustable trigger and the patent-pending Power Bedding integral bedding-block system that positively positions the receiver while free-floating the barrel. Additional features include a satin-blued, target-crowned hammer-forged barrel, Williams fiber-optic front sight and the 10/22-style adjustable V-slot folding rear sight. A 3/8-inch rimfire tip-off scope base groove is machined into the receiver, which is also drilled and tapped for Weaver No. 12 base plates (not included). 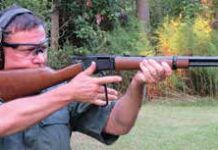