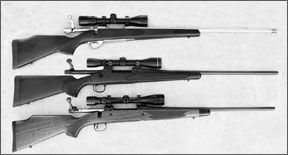 Hunting rifles fall into an interesting category among the firearms crowd, with more shooters having more opinions about the long guns than any other smoke pole. The likes and dislikes range from composite versus wood; short barrel versus long barrel; and dont even try to argue about the perfect caliber.

We selected three top-selling models for a test of good hunting tools and settled on what the late Jack OConnor considered the perfect caliber for North American game. In his classic The Rifle Book, he states: “Hunters using the .270 discovered that with it they could hit game at longer ranges than with anything else, and that when they hit they got a higher percentage of one-shot kills.”

With the argument about the perfect caliber finally put to rest (just kidding), we picked the Remington Model 700 SPS; the Savage 114 Classic; and the Weatherby Stainless Vanguard for our test of hunting tools. All three of the long guns have seen quite a bit of field and target range time as hunters across the country seek out their perfect deer rifle. We found few faults in the handling and functioning ability of the rifles and were generally pleased with the overall performance of all of the firearms in handling factory ammunition.

Although our Weatherby came equipped with the manufacturers custom Accubrake recoil reducer, we removed the device for velocity tests. Recoil from all of the rifles was considered in the easily handled range, even after extensive time punching holes in targets. We noted that the out-of-the-box trigger pulls on all three rifles, ranging from 4 pounds for the Remington to 2.5 pounds for the Savage, were satisfactory to excellent for hunting.

As noted in the accompanying accuracy/chrono table, the largest group with any of the rounds at 100 yards was 3 inches-what many hunters expect from factory ammunition. We fired the rifles from a Hoppes Bench Rest at two different ranges over several days to handle different weather conditions. Targets that produced very visible three-shot groups were the Birchwood Casey Shoot-N-C 12-inch bulls-eyes.

In addition, single shot, off-hand (no rest) shots were taken at various ranges to simulate hunting conditions. We encountered no problems in making what would be considered kill shots with any of the rifles in situations from 50 to 200 yards.

We also used several different optics mounted on the rifles, including a Bushnell Banner 3X9; a Leupold VariX-II 3X9; a Redfield 3X9; and a Swaroski Nova 1.5X6. Other than the Savage, there appeared to be little difference in grouping based on optics. Heres our report:

The heaviest and largest of the three test rifles, we liked the feel and handling of the Weatherby as a solid shooting tool. With an overall length of 44.5 inches, featuring a 24-inch barrel, and an unloaded weight of 7.5 pounds, the heft and balance were very comfortable. Combined with a short 13.5-inch length of pull, a drop at comb of 1.25 inches and a drop at heel of 0.9 inch, the Weatherbys Monte Carlo stock was a good fit for all of our team members.

The trigger pull of 3.75 pounds could have been a lighter for the sensitive fingers of some members of our test team, although we do not believe the pull was excessive.

We considered the five-round magazine a bonus, although the four-round magazines in the other two rifles are normal for most hunting tools in calibers of the .270 range.

As noted, our test rifle came equipped with Weatherbys custom Accubrake recoil reducer. The reduction in recoil from all the test ammunition was significant and appreciated. The addition is well worth the $160 and change required for the custom shop option.

However, even when the Accubrake was removed, recoil was not unpleasant and was very similar to the other two rifles. The .270 is not noted for its heavy recoil, and even after numerous firings, none of our test team suffered shoulder shock.

Of particular note is the manner in which the Weatherby handled all the test ammunition. None of the three-shot groups fired through the rifle were larger than 2.5 inches and the smallest group of 0.5 inches with factory ammunition was quite impressive.

We found that Weatherby lived up to its guarantee of three-shot groups of 1.5 inches or better fired from a cold barrel with premium ammunition. This rifle is a classic case of the equipment being more capable of high performance than the shooter.

A quality representative of a veteran hunting rifle, this synthetic version of the Model 700 has a good feel and balance. We found the firearm to be a pleasure to handle and shoot. The unloaded weight of 7.4 pounds, with an overall length of 44.5 inches and a barrel length of 24 inches, were all acceptable. A slightly short length of pull of 13.4 inches, with a drop at the comb of 1.2 inches and a drop at the heel of 1.4 inches, required some adjustment by some of our shooters, but was not considered a major deterrent to the rifles shooting ability.

We were a little concerned with the trigger pull of 4 pounds, which may have been a factor with the ability of the firearm to produce quality groups on the targets.

While 3-inch groups with two brands of test ammunition would not automatically cause us to reject the rifle as a good hunting tool, we wanted a better performance after shooting the Vanguard. The best average three-shot group of 1.6 inches was with the Federal 130-grain ammunition. We would suggest that any new owner of a Model 700 work with several different loads to find the right ammunition for a specific rifle.

The rough texture of both the forearm and the pistol grip on the stock allowed for easy handling of the Remington-a plus if the hunting tool is to be put into play during bad weather conditions. We found that the R3 Recoil Pad did indeed provide relief from the limited recoil of the .270 ammunition. The pad also provided a quality shoulder fit for all of our shooters.

We particularly liked the way the Remington handled in off-hand shooting situations, with those shot placements in line with the other two rifles off of the bench rest.

The lightest of our test firearms and sporting a 22-inch barrel, we found the Savage was easy to carry and handle in field conditions. With its American walnut stock, this rifle was deemed more attractive than the other two firearms by the traditionalists in our group. However, as with the other two rifles, there were no handling or performance problems with the checkering on the forearm and pistol grip providing a good, firm holding surface.

The overall length of the Savage was 43.25 inches, with a drop in the comp of 1.25 inches and a drop at the heel of 1.5 inches. The length of pull was 13.75 inches. All dimensions fell within our acceptable range.

We encountered some minor problems in loading the Savage, as the bullets had to be inserted straight down into the magazine. With the other rifles, a rolling motion of each round allowed for easier loading with the rifle in various positions. Loading the Savage could be particularly difficult in conditions that require a hunter to wear gloves.

Performance on the range was a little disappointing. We did seem to be able to produce better groups after becoming more familiar with the Accutrigger feature of the rifle. The Accutrigger out of the box touched off with 2.5 pounds of pressure after taking the slack out of the pull. For those familiar with a set trigger, the first pull “sets” the trigger and the second, much lighter pull, releases the sear and allows the rifle to discharge.

Adjustment of the Accutrigger, which we did not find necessary, can be handled by following the instructions supplied in the owners manual.

As noted in the accompanying table, the Savage produced decent 1-inch groups with both the 150-grain bullets, but did not handle the 130-grain Federal ammunition as well.

Unlike the other rifles, the Savage seemed to shoot its best using the higher-dollar Swarovski scope, producing the best three-shot groups when that optic was used for testing. We would also make the recommendation, as with the Remington, that a variety of ammunition be tested to find the right load for a given rifle. 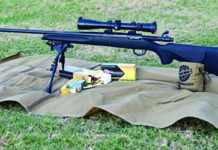 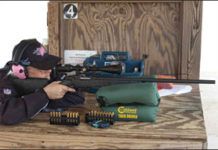 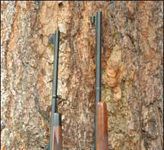