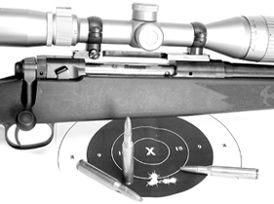 The .270 Winchester cartridge was introduced in 1925 for the Model 54 bolt-action rifle. The intended target of this cartridge was big game at longer ranges, and it directly competed with the larger .30-06 Springfield. The initial reaction to the .270 was, and continues to be, a love it or hate it affair based on its effectiveness and recoil. While the .30-06 has remained popular with hunters of bigger game such as elk, the .270 Winchester has found its niche in weight class below that, because the .270 offers characteristics that make it ideal for many shooters.

It offers a flat trajectory and long range punch. Recoil is considered no more than moderate, tolerable by all but the most inexperienced shooters. Heavier loads (150 grains) are suitable for big mule deer or whitetails, and lighter bullets in the 130-grain class extend the .270’s range for Western whitetails or antelope. Unquestionably, the cartridge can do a lot, but only if it’s shot in a gun that can showcase its accuracy and power.

Our rifles were designed to be plow horses, not show horses, so the keynote of this test was to see how much accuracy and convenience they offered to the hunter.

Range Session
Firing from a sandbag rest, we noted the uncomfortable level of recoil that made its way through these light synthetic-stocked rifles. However, the unpleasantness was at least partially due to firing from a bench, in which the recoil has no place to go but to the shooter’s shoulder and face. Standing or kneeling, we found recoil to be less punishing. We tested the rifles for accuracy at 100 yards, moving a Nikon Titanium 5.5-16.5X44 AO HT riflescope from rifle to rifle.

We chose three ammunitions based on bullet weight and configuration. Our heaviest bullet weighed in at 150 grains. This was a Nosler Partition slug loaded and marketed as Federal Premium No. P270E. Federal also loads a 130-grain coated bullet from Barnes in the Premium series, the Barnes XLC P270H. Between the two Federals, we fired a 140-grain Hornady Custom Boattail Spire Point Interlock Bullet No. 8056.

As well as in bench tests detailed in the accompanying accuracy table, we shot the rifles from both the kneeling and standing positions to see how they handled. Here’s what we liked, and didn’t like, about each rifle in turn.

Charter 2000 Field King, $345
For those not familiar with Charter 2000, the company inherited the design of the Bulldog revolvers, but the Field King is Charter 2000’s first rifle. It is available in .30-06, .243, .25-06 and .308 as well as the .270 Win. model we tested. The blued-steel model costs only $299, but the suggested retail price for our stainless model is $345. We can’t be sure what grade of steel is used for the receiver, but the barrel is advertised as a CNC 416-steel product by E.R. Shaw heat-treated and stress relieved. The barrel twist was 1:10. The trigger was fully adjustable for both sear engagement and overtravel, but in this case no adjustments were made to any of our test rifles.

The finish of the receiver had a brushed-on appearance, and the surface was wavy at points. Engravings were also below par, we thought, but overall this was still a good-looking rifle. The stock featured a 1-inch-thick ventilated buttpad and swivel studs front and rear. A fair job of checkering was molded in on the forend and grip.The bolt handle was plain and appeared to be cast and then machined. The fitting points were obvious. We don’t think Charter is trying to fool anyone into thinking this is a more expensive rifle than it is.

The bolt was not nearly as smooth or as pleasing as on the Winchester or the Savage, and chambering was at times stubborn, but ejection was sure. The receiver was fashioned after the Remington design and was drilled and tapped to accept the Remington Long Action scope mounts. However, the scope mount didn’t mate perfectly with the rear platform.

The floor plate was polymer and was not hinged; in fact it was part of the trigger guard. To empty the magazine without running the bolt, the stock must be removed. The stock had a slightly raised cheekpiece and a usable contour. It was mated to the action by two bolts, one of which comes out and the other (behind the trigger guard) remained captured. The connection of action to stock was direct and lacked pillars. Once fitted, there was virtually no float to the barrel.

The trigger featured a brief take-up and a pleasing break. We actually liked this trigger better than the Winchester’s, but we couldn’t translate this advantage into accuracy. We found 1.5-inch groups at 100 yards to be the best we could do on a consistent basis. Still, this is not bad for the money. However, we should have bought the blued-steel model instead. That way we could recommend the Field King at only $299, instead of saying we could have the Savage for just another $70 over the price of the stainless version.

Savage 111F, $419
The 111F featured a ventilated and contoured rubber buttpad and swivel studs fore and aft. Checkering on the stock was pleasing, and the bolt handle was also checkered. The bolt was highly polished and featured the Savage name and logo. The matte-blued steel had been brushed to give it a classic appearance.

The Savage 111F also required removing the stock to empty the magazine, unless you worked rounds out of the magazine with the bolt. The 111F didn’t have a floor plate. The Savage rifle incorporated iron sights, which we found were easy to adjust, remove, and re-install. We had success shooting with them even at 100 yards.

The 111F is the only rifle of the three that featured a floating barrel. Perhaps this was why we shot our best overall average groups— just under 1 inch for all shots—with it. Or perhaps it was the trigger. This was not a light trigger, but it featured a take-up with a consistent level of pressure and feel with little in the way of any grit. Another advantage: Loosening the two hefty Allen-head bolts revealed carefully machined pillars as part of the bedding.

All three guns favored the 150-grain Nosler Partition round, with the lightest bullet coming in last when fired from the Winchester and Charter 2000 rifles. While both the Field King and the Model 70 shunned the 130-grain Barnes XLC round (on average the 111F’s competitors shot a half-inch more accurately with the 140-and 150-grain bullets), the Savage used this cartridge to print groups measuring from 0.7 to 1.0 inch. In the past we have found coated bullets create less heat than their jacketed counterparts. But, in this case we found no measurable difference in the production of heat at the barrel between the jacketed, partitioned or coated slugs. We even tried cleaning and fouling the barrels to see if accuracy could be further improved. Conveniently, these rifles seemed to shoot a little better when they were a little bit dirty and a little bit hot.

Winchester Model 70 Black Shadow, $512
When we began this test, the M70 was listed by the manufacturer at $495 retail. Since then its price has jumped $12 north of the $500 line, but we do not suppose anyone is paying full list price for these guns, so all three guns almost certainly sell for under $500.

We judged that the 70’s stock offered the best (and thinnest) grip and the most effective checkering. Checkering on the bolt handle ran 360 degrees and provided the best grip surface, in our view. The bolt was scrolled, giving the Black Shadow a custom look. The black finish, although flat and without texture, was both bold and surprisingly mar-proof. The trigger was wide but radiused and lightly serrated. Thanks to the grip, the Model 70’s trigger was also the easiest to reach. The stock was pillar bedded, and there was an honest-to-goodness hinged floorplate with an easy working release tucked in ahead of the trigger guard. The Winchester’s action was far and away the slickest of our trio.

Now on to the quirky side of the Black Shadow. Without a doubt the trigger broke in, shedding pounds between the first day we fired it with the Federal Premium 130-grain rounds and the next day when we concentrated on the 140-grain Hornady cartridges. On the third day we fired the 150-grain Nosler rounds, and we do not think our groups improved by nearly 40 percent on average from day one to day three by accident. Furthermore, the grittiness we noticed in the trigger’s take-up the first day had not disappeared, but the trigger found its break sooner and sooner the more the M70 was shot. Perhaps there was a burr or milling debris that had to be worked loose.

Gun Tests Recommends
Charter 2000 Field King Stainless, $345. Conditional Buy. This is not a complete put-down. In terms of a truly inexpensive hunting rifle we could justify buying the blue steel model for $50 less. But, at the price of the stainless model, you could probably afford to step up to the Savage.

Savage 111F, $419. Buy It. Once again Savage is on the mark with a tasteful, accurate product that gets the job done for a reasonable price.

Winchester Model 70 Black Shadow, $512. Buy It. You can get this same model with several upgrades, but the basic package we tested reminds us how good a rifle can be.