In the August 2009 issue, we did our first test of the popular Taurus Judge 45 LC/410 revolver, using No. 4 shot in the shells we tested with. We immediately got reader mail asking if different

shot sizes would change the gun’s patterning characteristics, which we didn’t like all that much. We didn’t think that the patterns would be substantially different, but we like to test and be sure.

What we found. Using No. 6 and No. 71⁄2 shot, the pattern density was best with the smallest shot, which had very little of the noted doughnut shape observed with No. 4s. Patterns with No. 71⁄2 were slightly tighter than with No. 6s. Specifically, at 15 feet they were 28 and 32 inches respectively. We still feel that’s too far for the use of such loads against human adversaries in a crowded room. However, if you’re shooting snakes, we suggest No. 71⁄2 shells are indeed the way to go, and you might even be better served with No. 9s.

We obtained what are perhaps the most interesting results with the use of three-pellet buckshot, by both Winchester and Sellier & Bellot. We also got some Russian five-pellet loads, but they were 2.75 inches long, and could not be fired in our 2.5-inch-chamber Judge. We first tried the S&B loads at 6 feet. To our surprise we got a 3-inch pattern. Moving back to 15 feet, the three pellets had a spread of only 4 inches. At 20 feet they averaged just under 5 inches. This was quite a surprise to us. We then tried the Winchester three-pellet loads at 15 feet, and they gave considerably more recoil and blast, and went into a larger group of just under 7 inches on average. At 20 feet the Winchester buckshot loads went into 8-inch groups on average. We’d put the maximum range for buckshot at 20 feet, but we don’t know if they would disable an opponent faster than a 45 LC bullet.

We then pushed the envelope with both brands of buckshot and moved back to 40 feet. Two tries with S&B got 17 inches and 33 inches, entirely unpredictably for pellet position, and, for us, entirely useless. One Winchester load gave a 25-inch spread for the three pellets, which again we thought was useless. There was no guarantee you’d hit your target with any pellets.

Bottom line, we thought buckshot would be effective as self-defense loads out to 20 feet or so, but with several cautions. First, you have to be able to shoot. That is, you must aim the gun carefully to get hits. Thus there is no speed advantage with buckshot over 45 LC loads. Second, be advised round pellets ricochet badly. Any pellets that miss the target might get you into serious trouble from collateral damage out to extreme range. We suggest if you want to have a load that you can shoot quickly, that will most likely disable an opponent out to maybe 12 feet, by all means go with No. 71⁄2 shot. Any other use of the Judge for self defense will most likely be better served with either carefully placed buckshot or 45 LC loads.

Finally, don’t forget you can buy 45 LC shot loads from CCI and others, or roll your own. So if you don’t have a Judge, don’t feel left out. 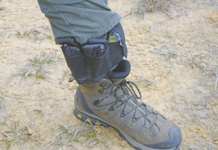 The Value of Ankle Med Kits 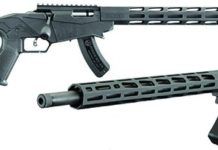