A current version of this shotgun was also available for sale for $380 at BassProShops.com. The SXP is a distinctive shotgun, a mix of anodized aluminum, chrome plating, and black furniture. The chrome-plated barrel offers excellent corrosion resistance. The shotgun would be ideal for use on fishing boats or in any environment where corrosion is a problem. The SXP bears some resemblance to the Winchester 1200/1300. The similarities include dual action bars and a four-lug rotary bolt head. The shotgun features a drilled-and-tapped receiver, making mounting an optic easy. We put several red-dot sights on it and found the set up attractive. We did not explore this option extensively, but it is certainly interesting, especially for the slug shooter. Besides the 18-inch barrel, the magazine tube and action bars are plated. The receiver is anodized aluminum, which buts some weight. The forend featured ribbed mounts for use with combat lights. We are not certain this is a factory option because the SXP was purchased used, but we did see at least one used model with the same forend advertised for sale in an online search. The shotgun isn’t exactly a lightweight at 7 pounds 5 ounces, so recoil wasn’t a problem, and recoil was further dampened by a well-designed recoil pad. The safety is located in the front of the trigger guard and the bolt release just to the rear of the trigger. These controls are positive in operation. The magazine holds five shells.

The forend was controversial. Most found it rough on the hands.

The Pic-pattern grip offered the ability to mount a combat light, an advantage, as is the marine finish. 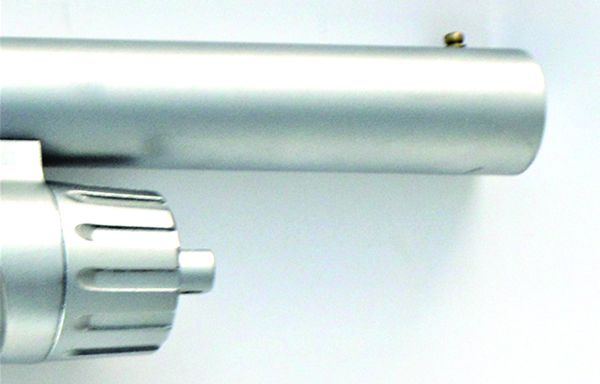 The SXP’s knurled take down knob was easy to manipulate.

A TruGlo optic. If you’re a slug shooter, this feature may make the decision to buy a used SXP easy, despite its B grade.

A Picatinny rail on the SXP allowed easy mounting of red dots or scopes.

An advantage in rapid disassembly is an oversize knurled knob that attaches the barrel to the magazine tube. This made the SXP the easiest shotgun to field strip by a margin. The SXP Defender is the only shotgun tested fitted with a removable choke tube. The supplied tube is Cylinder. Since we purchased the shotgun used, there was no box or choke wrench. The Inflex-type recoil pad proved to absorb recoil well. We felt the stock design is good, but it did not shoulder quite as quickly or smoothly as the Model 1200 Winchester. Neither was the action quite as smooth, although it is acceptable.

During the firing test, the SXP performed well. We loaded the five-round magazine and addressed man-sized targets. The shotgun was reliable and operates smoothly with good speed. While the forend is designed to accommodate and utilize combat lights, we felt that the design was a bit abrasive, especially considering the recoil of the 12-gauge shotgun. You had to hold on to the forend and actuate it during the firing test, and this could abrade the palm. This forend is more of a drawback than an advantage, we felt. There are superior aftermarket forends that mount a light but are not as abrasive. Just the same, we made solid hits with buckshot loads. Moving to slugs, the bead front sight gave good results. We fired a 2.5-inch 15-yard group, with some smaller.

After some debate, the SXP was rated down a grade based on the rough-handling forend. The magazine holds five shells compared to seven for the Winchester 1200. The magazine holds one more shell than the standard Remington 870. We could not find an extension magazine tube for this shotgun, manufactured for Winchester in Turkey. If you prefer American-made shotguns, this is a factor.

We liked the SXP based on an attractive used price and the ability to mount combat lights and red-dot sights. The advantage of chrome plating cannot be overstated for marine or rough-condition use. As one rater noted, if you like the 1200 more, you cannot purchase one at any price from the factory. We rated the SXP high, and while we were lucky to find a used one, you cannot count on this because used SXPs are not common. We recommend replacing the forend on this version. Those illustrated on the Winchester website and almost all we have seen for sale did not have this poorly designed, abrasive forend. 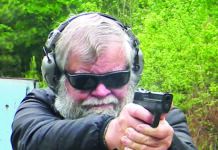