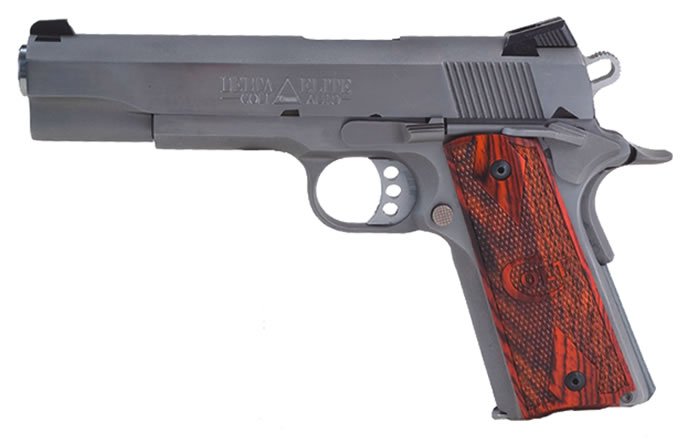 Several years ago, I was fortunate to find an early Colt Delta Elite for a very reasonable price. It came with three 10mm magazines. After firing a box of 10mms and waiting for my eyebrows to grow back, I decided to drop a 40 S&W barrel into it. Ordered an appropriate Kart barrel, two Metalform mags, and Jerry Kuhnhausen’s book on the gun from Brownells, and went to work. Everything worked out great except the mags. They fed sporadically and would not lock the slide back after the last round was fired. Apparently, the small platform on the followers did not make sufficient contact with the slide stop to push it up into its proper position. When I reordered with another mag, I had the same problem. What to do? I simply loaded up the original 10mm mags with the 40 S&W rounds and have been shooting both factory and reloads without a hitch ever since. They work great. By the way, I recall reading more than 40 years ago, if you are having trouble with 9mm mags in a 1911, use 38 Super mags instead. Keep up the good work, I enjoy your unbiased and objective tests.

G.W. — Thanks for the advice on this uncommon firearm and chambering. A lot of folks are curious about the Colt Delta Elite chambered in 10mm, shown below, but aren’t willing to part with the change for pistol and ammunition to see what it’s all about.

I just finished reading the latest issue of Gun Tests and I really enjoyed it. I have a question on the 308 battle rifle test. How come you didn’t mention the fluted chamber that is part of the CETME/91 design? Maybe it’s not on either of these rifles? I ask this because around the year 2000 I briefly owned a CETME. It was a good rifle as far as how it handled, and I would much prefer that design over most other 308 semi-auto battle rifle designs. But it would only shoot rounds with thick case walls — ammo such as Portuguese, South African, and my favorite, Australian surplus. None of which, to my knowledge, are imported to this country any more. It tore the case head off Winchester, Remington, UMC, PMC, and other domestic brands. My broken-shell extractor got a real work out until I figured that out. So, after all that, I gave the CETME rifle an “H” rating — two letters below “F,” which for me means I will not ever buy one again!

So after all that, did the 308 battle rifles that were tested have fluted chambers, and did you encounter any issues with ejecting with them? I didn’t read where you did. I looked into a PTR-91 earlier in the decade and the rep with JLD told me that the PTR-91 had a partially fluted chamber. With all that said, I feel like I may now consider buying a PTR-91 based on your review! Thanks for writing a great gun testing magazine!

Hey Mike: On page 21 of the June issue, first paragraph below the PTR subhead, the text reads, “The PTR-91 and the C91 use the characteristic fluted chamber that helps to dispel pressure and allow easier extraction of the fired case.” And then on page 24, Bob Campbell supplied the accompanying image and caption, which read, “In this malfunction in the C91, this case spun backwards and was caught by the bolt. Note the characteristic gas-blowby markings on the cartridge case from the fluted chamber.” — tw

Re: Model Numbers in Names

In Gun Tests, what do the numbers in the firearms names mean? For example, from the May 2015 magazine, page 18, Beretta A400Xplore Action has this in its name: “J40AA88.” What does J40AA88 signify? And then, also from the May issue, LWRCI M6A2 Piston Carbine M6A2R6B16. What does M6A2R6B16 signify? If I wanted to purchase a firearm that was reviewed, could I just tell the dealer the model number?

Hey Oscar: In both cases you cite, the alphanumeric code after the manufacturer’s name (e.g., LWRCI) and series designation (e.g., M6A2) is the manufacturer model number. So, the LWRCI M6A2 Piston Carbine M6A2R6B16 is an exact, specific gun. In this example, there are several other M6A2s that LWRCI makes that are slightly different configurations. The M6A2R6B16 is a specific gun, with certain specifications, that we tested. Other M6A2 models can have different handguards, buttstocks, colors, triggers, sight packages, and so on. So, for instance, when I put the name and model number into a browser search, the first entry that comes back is for ImpactGuns.com, which has the firearm listed for $2,250.29. That is the model we tested. If you’re interested in our specific test gun, it’s listed for sale on GunBroker.com in Auction No. 485590270. Or search GunBroker.com for auctions by seller “texasguncollector.”
— tw

I am a long-time subscriber to Gun Tests. I am requesting a comparison of the KSG vs. the UTS 12-gauge bullpup shotguns. — Kevin

Hey Kevin: We reviewed the KSG (pictured right) in the November 2012 issue. Our Team Said: “On the second gun, we had only one failure to feed after shooting several hundred additional rounds. Because it’s a pump, it doesn’t require the same level of maintenance as gas systems on the semi-autos do, and it will shoot and cycle just about anything of any power level you stuff in it, unlike the Saiga. We didn’t like that the KSG ejects spent shells straight down into your pump arm, and we learned that we preferred working it with a grip.”

We reviewed the UTAS UTS-15 12-Gauge Shotgun (pictured right) in the June 2013 issue. Our Team Said: “The UTS-15 worked like a well-oiled machine. We liked the feel and the way the gun moved. Capacity was top shelf — load on Sunday, shoot well into next week. But we still have reservations. If we were choosing between a Saiga at half the cost and the UTS, just the dollars would give the Russian a win. Also, this is a fairly new design, and our recent experience with the prototype KSG and a 2nd-Gen SIG Sauer 556R, or any other new design on the market, would make us pause. If you have already purchased a UTS-15, it appears that UTAS is performing warranty work on guns that are having problems under the one-year warranty. So, our recommendation is to wait this one out and let the non-Gun Tests readers be the beta testers on the UTS-15.”
— tw

I am writing in response to Woody’s Firing Line post in last month’s issue: “Air Rifle or Suppressed?” I am in a similar boat, as I am surrounded by evil varmints and neighbors (some of whom aren’t as smart as horses, but we won’t go there). I have gone the whole gamut in regards to varmint control. I am 50, somewhat nearsighted, with my eyes not getting any better with age. I would like to make some suggestions for Woody, which I think may help him out.

I wouldn’t recommend a suppressed 22 LR rifle, for a variety of reasons. Not that I have anything against them — I have a number of them myself. But I do think for what you’re trying to accomplish, there are better choices. Never mind the fact that 22 LR ammunition is apparently made of Unobtanium of late, and a suppressor (silencer) is expensive and requires a $200 tax stamp. Interestingly, an integral suppressor on an airgun does not require a tax stamp. I tried a Crosman 177-caliber air rifle, but since the pellet broke the sound barrier, the dang thing was as loud as a 22 LR! So, it would be wise to be sure the pellet is rated below 1,000 fps from an airgun you’re considering.

I think you should seriously look at a Walther LGU Air Rifle or the Air Arms TX200 MkIII pellet rifle. Also, I personally have, use, and love a 22-caliber Air Arms TX200 MkII (pictured above, photo by AirgunDepot.com). Both rifles are subsonic and have integral suppressors and are quiet.

Another thing I would suggest is that you use lead-free pellets, such as from Haendler & Natermann. They’re non-toxic, which is a good thing when you’re shooting around horses, and any time there’s a chance other critters may eat any kill you may not be able to recover and properly dispose of. I use the lead-free Haendler & Natermann pellets in my TX200 MkII, and they shoot great. But with that, keep in mind that lead-free pellets are lighter than lead pellets, so they’ll be faster. In my 22-caliber TX200 MkII, the Barracuda Green pellets are still subsonic. I’m not sure about the 177-caliber version. So if your rifle is already rated to flirt with the sound barrier, you may want to either stick with lead, or choose a different rifle or caliber of rifle.

I hope this helps!
— Colin

Thank you, Colin. Great advice. The Air Arms TX200 Mk III is a field-target underlever-style spring-piston-operated air rifle with a Lothar Walther barrel. Action is a sliding breech. It doesn’t ship with open sights, but it has 11mm dovetail grooves for optics. The beech Monte Carlo stock has a raised right-hand cheekpiece, and the forearm and pistol grip are checkered. Other features include a two-stage adjustable match trigger. It usually sells for around $630. — tw

Loved the article about the Mora knife; bought four and I love them. However, no matter how I try to find the Scow sheath, no luck. Neither Scow or Last Ditch Leather Works’ website is working. Any suggestions on how to get in touch with Mr. Scow?

Mr. Miller, Duane Scow does not have a website. He has only an email address, which we published. Contact Duane at lastditchleatherworks@aol.com. Duane said he now has a steady list of 200 orders for this sheath. He had 30 requests the first day my story appeared. Gun Tests spreads the word. — Ray Ordorica 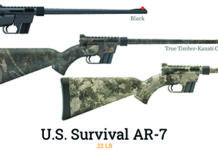 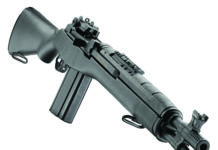