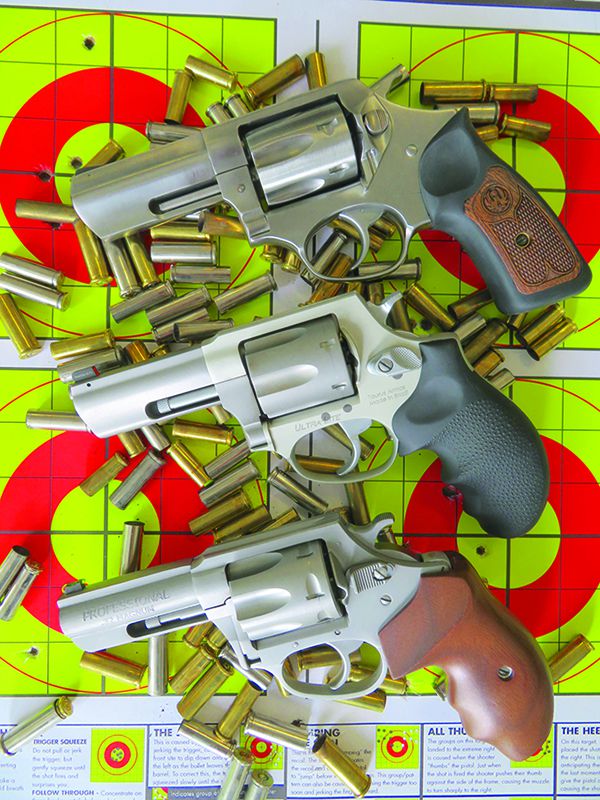 It seems to me that some time ago you folks sold your test guns somehow. Does this still hold true, and if so what is the process? I have a strong interest in acquiring a Ruger SP101 in 327 Federal. Thanks in advance for any answers/help. — Marty

Hey Marty: We haven’t sold Gun Tests test guns for more than a decade. The FFLs who handle our firearms transactions now sell them locally 100% of the time. Sorry about that. — Todd Woodard

The range data for the 38 Special 110-grain FTX +P in the six-shooter is 224 foot-pounds, whereas the seven-shot Charter Arms 32 H&R Magnum with Buffalo Bore 100-grain JHP +P ammo is listed as 355 foot-pounds, which is about one and one half times more. The 32 Federal Magnum is listed at up to almost twice the 38 Special. If this is accurate data, I might seriously choose one of the 32s for defense over the 38, especially with one more round. I am frankly surprised that the 32 would outshoot the 38 by that much.

On a slightly different note, I inherited a 30-cal. Luger bought by my dad in about 1925 that has never jammed, as did the duffle-bag 9mm that you tested in the December 2020 issue. Is that a characteristic of the 30-cal. Luger versus the 9mm? I don’t think I have ever seen any test of a pistol that used the 7.65 Luger cartridge. Is there? Also I had a 9mm Luger that jammed with commercial ammo but never jammed with surplus machine-gun ammo. I believed the commercial ammo was too weak to work the action properly and think that might be why your test gun malfunctioned.

I am a long-time subscriber and read every page to keep up with the ratings for purchase of guns and ammo. Unfortunately, many of the guns aren’t available in California, especially those with higher capacity. Keep up the good work. — J.D. 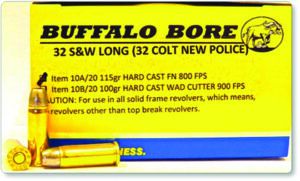 I really liked the article in the August issue about 32 Magnums. I recently bought an H&R 732 to complement my Dad’s H&R 922. These are small revolvers and seem plentiful and affordable in the used market. I found 32 Long ammunition widely available. With the click of a mouse, I bought Lapua 83-grain wadcutters, Fiocchi 97-grain FMJs, Remington 98-grain LDs, and Buffalo Bore 115-grain hard-cast rounds. Buffalo Bore is by far the hardest-hitting of the bunch and has low flash. According to its website, Buffalo Bore created the 32 Long hard-cast as a self-defense round for the millions of old 32s out there. However, Buffalo Bore does not recommend the load for top-break revolvers because of the inherent weakness in the frames. Some have been using 32 Auto in their old revolvers, but that’s probably a very bad idea. I like my little Mouse Guns and now feel comfortable having a harder-hitting ammo available that approaches the power of a magnum. Love the magazine. — Carl

Hey Carl: Yes, those 32 S&W Long rounds from Buffalo Bore (pictured above) are stout. From the Buffalo Bore website: “In order to make this cartridge meaningful for self-defense, we designed hard-cast (not soft) bullets that will not deform on impact and will maintain their flat nose profile as they penetrate through muscle and bone and because of their flat nose, they crush (not slip and slide) through mammalian tissues, doing considerable damage along their path. We alloy and lube these bullets properly so they will NOT substantially lead foul any normal barrel. Then we added velocity by using modern powders that will give extra velocity and remain within the SAAMI pressure limits of 15,000 PSI. The result is a fairly lethal cartridge that brings new usefulness to millions of these old pistols. Depending on how much clothing must be penetrated and how much bone is encountered, expect 20 to 30 inches of straight-line penetration in mammalian tissue with this load. This bullet is 15 grains heavier than any other commercial load we could find, yet it is going substantially faster than any (about 100 fps faster) commercial load we could find.” These old dogs still have some fight in them. — tw

Todd, I am coming up on the 20th anniversary of my lifetime subscription, and I don’t remember how many years I subscribed annually before that. I could hardly believe you were offering the great deal of a SIG Sauer P220 AND a lifetime subscription for $500, and I jumped on it. Best $500 I’ve ever spent. The integrity you bring to gun buyers is priceless. Thank you!

I would like to see a comparison of high-end pistols. I really like my Kimbers, because they seem to shoot as well as pistols that are priced several times their prices. But I’d like to know what your staff thinks of Nighthawk vs. Wilson Combat vs. Les Baer vs. Ed Brown vs. STI vs. Dan Wesson vs. Cabot. And then there’s the custom shops in the big manufacturers. I realize that article might not appeal to the majority of your subscribers. But I’d bet that a significant portion of them would appreciate your analysis, so that if they did decide to invest thousands of dollars into one gun, they would know they are choosing the right one for them. I know I would. If you’re going to spend like that, you’d like to know you’ve made your best choice. It might be a good idea for an annual article. Regardless, thank you! —David

Hey David: Thanks for joining in on that lifetime deal. It was a good one. We do occasionally venture into the high-end guns, most recently with Wilson Combat and Guncrafter Industries in the August 2020 issue. We tested five pricier 1911s in the July 2020 issue, including Guncrafter, Nighthawk, and Dan Wesson. In that article, we said, “The Guncrafter Commander, $3285, and Nighthawk Custom Falcon, $3699, right, have unimpeachable quality. These small-scale makers have taken the chore of making the kind of handgun a few are willing to pay for and then setting the price. They do well, and many of the handgunners who purchase these handguns trust them for personal defense, carrying them on a daily basis. We don’t see how they could be made appreciably less expensive and maintain the same features and quality. If you are flush with funds, the Guncrafter Commander is Our Pick, but it was a close call. The Nighthawk Custom Falcon, $3699, will please the most discerning 1911 fan as well. In the May 2019 issue, we evaluated a Les Baer Concept VI 45 ACP, $2290, saying of it, “The Les Baer Concept VI is a carry and combat pistol and features fixed sights versus other handguns offered by Les Baer that feature adjustable sights. The piece is very accurate. Stainless construction offers considerable resistance to the elements. The pistol did not require the break-in period that other handguns sometimes do. It wasn’t faultless; we dinged it for a sharp edge on the safety. This is a great handgun if you can handle the price.” It’s been a while since we covered Ed Brown, STI, and Cabot pistols, so I’ll see if we can get something going on them. — tw

Now that Wolf Brand Ammo is banned from Russian import, I predict that import bans from other countries will follow, with an eventual ban on buying online and having ammo shipped to your house. This Wolf issue will have ripple effect; already one importer is charging $650 for a case of Yugo ammo. More than 50 years ago, a NY senator, whose name escapes me, stated that the way to attack gun rights was to go with ammo bans. — Art

Todd, enjoyed reading your article on customized 9mm Semi-Autos. I obtained a Browning in the late 1960s and loved it. Fit my hand beautifully, very accurate and relatively soft-shooting, but I rarely fired it and never carried it. Like a 1911, it was way too big and heavy for me to lug around. I’m a pocket-carry type mostly — 2-inch-barrel revolvers then, autos beginning sometime in the 1980s or so. My current every-day carry gun is my personalized P365. I love it. However that’s not the purpose of my letter.

In particular, I was interested in the ammunition you used for your comparisons:

Not questioning your choices because they were probably what you can obtain lately and are probably quite representative of what many and/or most people would choose. 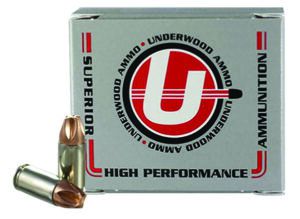 However, I contrasted this with my 9mm carry load(s) and wonder if you would be interested in doing a test between my carry loads and what is usually considered for carry. My choices are:

Both of these rounds appear to be more effective in wound channeling and stopping power than most other 9mm defensive ammo, and both appear to satisfy the FBI protocols because they will penetrate 12+ inches of ballistic gelatin. With 392 and 450 foot-pounds of energy, they appear to best most 9mm defensive loads with less recoil. I load them alternately in my magazines (Underwood in the chamber followed by a Liberty then Underwood and so on).

My goal is to stop any threat as quickly as possible, and these shoot well for me, with great stopping value and low recoil. But most recommend hollow points for defense, many of which don’t seem to penetrate nearly as far. Most reviews I have seen on YouTube, especially the MAC Channel, are favorable especially for the Underwood. My normal practice load is 115-grain FMJs, but my carry loads are these two.

I think you would do your readers a great service to review these and compare them to defense loads your reviewers normally recommend.

Hey Robert: We’ll take a look. Thanks for the idea. We have tested the solid-copper monolithic bullets in the past and have found they generally do very well in penetration, and they stay together. We haven’t looked at the fragmenting rounds, however, and that intrigues me. — tw