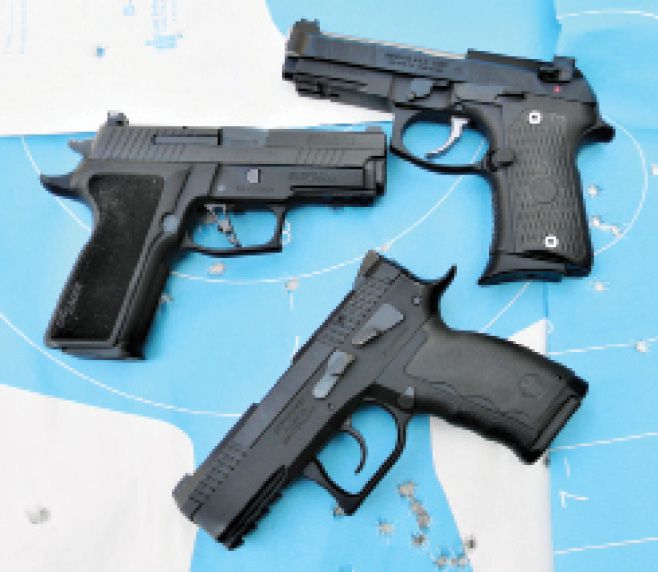 Re “Gun Belts: Beat the Sag with Choices from Wright, Bigfoot,” February 2021

FYI, I called Wright Leatherworks, the makers of the Bullhide belt to order one, and they said they no longer supply that item. Guess I got there too late. Looks like I’ll have to spend $75 for the Old World Belt. — Jim

Sorry to hear that, Jim. But you’re right about your second choice; the Old World Gun Belt is also a recommended product. Contributing Editor Bob Campbell wrote about the latter, “The Old World Gun Belt is thick at 0.25 inch and is, according to Wright, treated with oils and tallows for longevity. This treatment, often called waxing, is an overlooked feature. Edging is competently executed. The finish is intended to display an aged or distressed look when new and is designed to acquire a finished patina over time. You may choose either a standard or roller buckle attached with Chicago screws. This isn’t the flashiest belt, but it is one that will provide good service.” — Todd Woodard

Hello GT! I thoroughly enjoyed this issue. I have a few questions for you.

Why the demerit for the take-down procedure for the Sphinx? As you stated in the article, it is a little different when compared to other handguns, and I get that. But as an owner of Baby Eagle pistols, which are CZ clones and have the exact same take-down procedure, I thought that was a bit rough on the gun. Once you take a CZ clone apart a time or two, it’s pretty simple. Still a great article on it, all in all.

Second, the big 44 revolvers. I was a little bit surprised that you didn’t do a small sidebar article on the little UTG optic on the S&W PC 629. I have been very curious about that optic up till now, and the mention that you gave it was good. Maybe in a future issue you could revisit it. I’m sure there are a lot of readers who may be curious about it also. I plan to check it out for myself one day soon when I buy one. I’ve had my eye on that revolver for a long time, and this article just gave me a reason to get one. So thank you for that.

And last, as a long-time reader/subscriber of Gun Tests, I would like to ask that you research, as only you guys can, the state of affairs in the gun-manufacturing sector of our country and let us know what you find out. I know that several makers have moved their factories to the South and that has limited their availability to the market. For example, Kimber moved to Alabama, Smith & Wesson to Tennessee, and so on, and are only trickling out firearms here and there. I think there should be a little more availability by now.

And I won’t even mention the P word. Primers! Thanks again for a great magazine. — Mike

Hey Mike: The Kriss got the half-grade markdown for its slightly more complicated take-down process and its relative lack of holsters. But of the take-down, Bob Campbell wrote, “The take-down process is our least favorite. The slide is retracted to the rear a short distance, and lineup marks in the slide and frame must align for the slide lock to be removed. The slide lock is a tight press fit and must be rapped with a tool or magazine base for removal. Then the slide may be run off the frame. Next, lift out the recoil spring and then the barrel. While this takedown isn’t difficult, we prefer the SIG and Beretta systems.” Like you, we saw tight supply problems in 2020 and 2021, but I don’t think that was the result of companies moving. Rather, it was a combination of 6 million new shooters and supply-chain upsets due to the Covid outbreak. — tw

You Guys Gotta Do a Test…

You guys gotta do a head-to-head test comparing the clones of Browning’s Hi-Power pistol:

There’s very little informative online reviews regarding clone improvements on the original Browning design, except for the Springfield pistol. There might be other pistols, but right now from what I know, the Springfield SA-35 gets my vote. Please do a review ASAP. — Steven 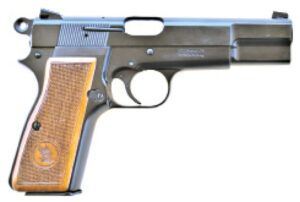 Hi Todd. For many years I have wanted a Hi-Power. I purchased an Argentinian surplus pistol, what I could afford then, but it did not satisfy my craving since it was worn out, unreliable, and inaccurate. Now FN and Springfield Armory have brought out new versions recently. Tisas and I believe other manufacturers have versions in present production. I am awaiting your sage advice on which of these will best satisfy my Hi- Power lust. Thanks for your most excellent work. — Joe

Hey Steven and Joe: We covered the Tisas Regent BR9 in the June 2021 issue, “9mm Single Actions: Tisas, Ruger, and Citadel Compete.” Contributing Editor Bob Campbell wrote of the BR9, “This is a good performer worth its price. While we like the [Ruger] 1911, the Hi-Power has a greater magazine capacity and dispenses with the grip safety some do not care for. It is a viable choice for personal defense. We rated it down a half grade on the heavy hammer spring and difficulty in racking the slide. For some, this would be a deal breaker. The Ruger SR1911 Commander is the easiest of the four handguns tested to rack and make ready. A 9mm-strength recoil spring and fairly modest hammer spring made this possible. If you like the Browning Hi-Power, then the Regent is a modern equivalent we believe is as well made as the original.” The Springfield Armory SA-35 is covered on page 6 of this issue, and we agree with you; it is a better version of the vintage Hi-Power. I have writers working on the Girsan and FN High Power pistols and will get those reviews to you ASAP. — tw

Hey Todd! I just watched a YouTube video in which a guy takes a Beretta M96 (40 S&W) and swaps out the barrel from an M92 (9mm), uses the 40 S&W mags, and shoots the heck out of it. What do you think about this swap? If it’s a good idea, how about a Gun Tests review? If not, please send a one-word email reply: No. Also, do you know anything about Inox Berettas being called “ghost guns?” Have a great day. — Robert

Hey Robert: The 92/96 Combo Kit Pistol was a thing. From the Beretta site: “The 92/96 Combo Special was offered during the late 1990s with the intent to give the shooter one pistol capable of firing two cartridge types. This was achieved by mating a 90-series frame to two complete slide-and-barrel assemblies, one chambered in 9mm Parabellum and the other in 40 S&W. These components were tested as assemblies and marked “Combo,” indicating they meet interchangeability requirements. To change calibers, the shooter simply swapped out the slide, barrel, and magazine. These kits included one frame, one 96 slide and barrel assembly, one 92 slide and barrel assembly, one 96 magazine, one 92 magazine and one each of a 92 and 96 manual, all housed in a special hard case. The catalog code was SPEC0229A with a total production of around 2500 units. Last MSRP was $879 in 1998. You may be able to locate one at GunsAmerica.com.

So, yes, if that’s what was being shown. We reviewed the Combo Kit in the May 1999 issue. We said: “Beretta is selling a 92/96 Combo Kit Pistol, a $908 parts package that allows the shooter to get a double-action semiautomatic ten-shot pistol in both 9mm and 40 S&W calibers. For an extra $279 above the base price ($629) for either a Model 92 9mm or Model 96 40 S&W, the Combo Kit owner gets one barrel, slide, and magazine in each caliber, and one specially made and marked aluminum-alloy receiver designed to accept them both. But is this a deal, or simply a way to thin out your wallet? We ran a test to find out.”

Changing calibers on the Beretta Combo is a breeze. One simply presses and holds in a locking button protruding from the right side of the forward end of the slide, then rotates the dismount lever on the opposite side. Presto, off comes the slide and barrel, plus the recoil spring and its guide pin. Move the recoil spring and its pin to the other barrel/slide Combo and slip that onto the frame, turn the dismount lever back to its original position, grab the other magazine and you’re set to go. If the owner wanted to buy a second recoil spring and guide pin and keep one in each unit, barrel swapping could be done in well under 10 seconds. As it is, it takes all of 30 seconds. This near-instant dismount also makes clean-up very easy.

We like the feel of the Beretta’s grip and the ease of dismantling the gun for cleaning. The fit and finish are superb. All the controls fall to the hand. The double-action pull is long and smooth, with a pull of around 11 pounds. The single-action trigger pull is crisp and without creep. Although it broke a touch heavier than we’d like, at 5.25 pounds, it’s very useful as it is.

The Combo set comes in a very nice carrying or storing case made of plastic with slots for all the components. It’s a decently thought-out package, in our estimation.

The 40 S&W cartridge in a big handgun like the Beretta gives significantly less felt recoil than the 45 ACP cartridge in a similar-size handgun. The feel of the Beretta is one of extreme comfort. The grip is large but comfortable, and easy to grasp. It spreads recoil over the hand, so there is no pain no matter how hot the ammo. Everything works correctly on this handgun, and works in both calibers, as our accuracy testing showed.

The only thing we didn’t like was that it was hard to read the marking on the magazines to tell which was which. It would be easy to grab the wrong one.

Many Beretta owners clamored for a combination package for years, a Beretta rep recently told us, and that is why the company brought out the Combo. It’s only about a year old as this is being written, but it has been well received.

✘ If you can be satisfied with a 9mm handgun, it makes little sense to buy the $908 Beretta 92/96 Combo Kit Pistol.

✔ However, if you are in the market for a 40 S&W DA handgun, we’d instead look long and hard at the Beretta Combo with its 9mm option.

Robert, as we often say, the market always wins, and this idea didn’t pan out over time. As to your last question, I haven’t heard about the Beretta Inox being called a ghost gun. — tw