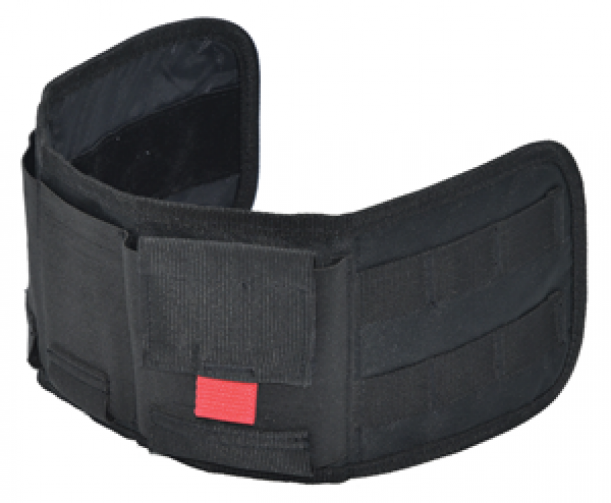 When it comes to mainline sports and recreation, safety precautions are as common as the activities themselves. Visit any sporting-goods store, and you’ll see helmets being sold in the bicycle department, life preservers in the boating department, and first aid in the camping aisles.

However, that’s not always true for the shooting sports. Recently, we attended the grand opening of a new shooting range. The pro shop had display cabinets filled with guns, shelves full of holsters and ammunition, but not a med-kit in sight. This is not uncommon. Maybe reminding customers of the inherent danger of operating firearms is considered bad for business. But if you’re willing to accept wearing a seatbelt in an automobile or if you know CPR, why not be able to render life-saving aid around guns with just a few simple tools?

In terms of injuries related to firearms, the most threatening is gunshot trauma. If there is one device that has done more to save lives by stopping blood loss it is the tourniquet. It has been said that the number-one factor in the reduction of fatalities on the battlefield is the rapid application of tourniquets. In many cases the victims can apply the tourniquets themselves. This is referred to as “self-aid.” Care applied with the help of others is referred to as “buddy-aid.” The goal of applying a tourniquet is to preserve life long enough to be transported to a hospital or trauma center for “advanced aid.”

Certainly, there are other medical emergencies that arise other than uncontrolled bleeding. Diabetic shock might be addressed by ingesting high-fructose gelatins, a stroke can be short-circuited or a heart attack minimized by taking an emergency dose of aspirin. Cardiac patients regularly carry tiny nitro-glycerin pills. But how can these items be carried so that the victim is able to perform self-aid? Or, how would a buddy be able to find these tools if they had to look for them?

For example, about 15 years ago one Gun Tests writer began taking a series of gunshot-trauma classes. From then on he carried a tourniquet, nitrile gloves, wound-packing material, and bandages in his range bag. A couple years ago, he became a cardiac patient, which necessitated carrying nitro pills and aspirin in his wallet. In a recent incident, he was forced to lie down to combat sudden chest pain. He needed to take aspirin right away, but found it physically draining to reach for his wallet, making his condition life threatening. What if he had needed to access a tourniquet? That’s when he decided to experiment with ankle-worn medical kits leading to the following field evaluation.

Much like the array of ankle holsters we have reviewed in the past (July 2009), ankle-worn medical kits are categorized according to the material used, either cloth or neoprene construction. The Rescue Essentials Ankle Medical Holster sells for $30 from Rescue-Essentials.com. This is a one-piece nylon-cloth construction featuring two open top pockets, one closed pocket, a patch of MOLLE loops, and Velcro closure. The $70 Ankle Trauma Medical Kit from GalcoGunLeather.com features neoprene construction. This unit offers five pockets, each with Velcro strap closure. The Ankle Trauma Medical Kit is held in place by bridging the two ends with a separate panel of loop Velcro. Each of these kits was worn for two days at a time in a rotating format for a period of two months. Along the way, we learned these units could also serve as an organizer that was more versatile than the typical first-aid zipper pack.

Our evaluation graded each kit on storage capacity, comfort, concealability, and a projection of our ability to access supplies under stress. Regarding concealability, we found hiding the kit was more a function of what size pants cuff we chose to wear. Nevertheless, “invisibility” was compared with the tourniquet placed on the inner side of the leg so that it was available to either hand.

The Rescue Essentials Ankle Medical Holster was constructed of a nylon weave consisting of two layers joined by a trim that encircles the unit, including rounded corners. The layers are further bonded where the pockets are sewn in. The interior side offered a velour strip for comfort. The Ankle Medical Holster measured 5 inches top to bottom and overall length was 18.4 inches. The minimum inner circumference when closed measured 13.75 inches. This was determined by mating the loop-and-hook fabric (Velcro) so that they were directly on top of one another. Expanding the unit beyond this length meant exposing the hook-side Velcro to the leg, which we thought would prove uncomfortable, but did not. Leaving 1 inch of Velcro for contact, the maximum inner circumference measured about 17 inches. This became relevant when we realized these units could be wrapped around objects other than our ankles. Examples include a stanchion on an ATV, the arm of a chair, someplace that could serve as a workstation, or provide a readily available point of storage. In this regard the three pair of MOLLE loops that back on to the loop Velcro end can be used to attach the Ankle Medical Holster to a backpack.

Storage space consisted of two 4-inch-tall vertical pockets located side by side next to a larger pouch. Measured seam to seam, the smaller pockets were about 2 inches wide with open tops, and they backed directly on to the wrapping portion of the unit. This limited how much they could stretch. The pouch measured about 3.8 inches seam to seam and was topped with a flap sporting a red pull-tab. We describe it as a pouch because it hung from the backing, and the nylon and elastic material allowed it to expand. The bottoms of each compartment were tethered but not completely closed.

A stocked version filled with recommended items was also available from Rescue Essentials listed for $65. The Tactical Ankle Medical Kit includes two pairs of Nitrile gloves, one Israeli T3 Bandage (4 inch), and a SOFTT-W (wide) Gen 4 Tourniquet. We packed our kit with a SOFTT-W tourniquet in one pocket, a C-A-T (Combat Application Tourniquet) tourniquet in the next pocket, gloves, gauze and hemostatic supplies such as Celox or Celox-impregnated gauze. We found that the C-A-T rode higher than we’d like, plus the capture for the windlass (the rod that is wound to apply pressure) was too bulky for concealment. We decided the more compact SOFTT-style tourniquet was the way to go, and carrying two of them side by side in the vertical pockets, plus the aforementioned supplies in the covered pouch, provided a very good level of preparation.

We also found that medication such as aspirin and nitroglycerin pills could be bagged and stashed within the folds of the tourniquet.

A third style of tourniquet we tried is the RATS Gen 2 tourniquet. Short for Rapid Action Tourniquet for Survival ($18 from RATSmedical.com), the RATS system relies on a flat cable consisting of a proprietary solid elastic core inside an elastic sheath that is wound around the limb then secured by a cleat. The RATS can be wound in any shape for storage. Empty, the unit weighed 2.9 ounces on our scale. When filled with our SOFTT-W tourniquet, pills, Celox-impregnated bandage, three Nitrile gloves, and a RATS tourniquet, the unit weighed 10.1 ounces.

Our Team Said: The Tactical Ankle Medical Holster provided secure storage and seemed to be indestructible. Access was quick and easy and kept its contents close to the leg for excellent concealability. We felt some pressure from the upper edge of the holster, primarily while seated, specifically when riding in a car. This did abate over the course of our test period, so comfort will improve with wear. The MOLLE loops offered the potential for additional utility.

Galco’s Ankle Trauma Medical Kit consisted of two sections of 4.4-inch-tall neoprene sewn together. In addition to the master seams at each end, four additional seams were added to produce a total of five pockets. The widths of each pocket measured seam to seam was about 3.5 inches, 3.1 inches, 1.6 inches, 3.5 inches, and 2.3 inches respectively. The outer surface of each pocket offered a facing of loop Velcro so a corresponding strap could fold over and hook into place. Some of the straps were long enough to wrap around to the underside of the kit. The inner surface of the wrap was bare neoprene, yet was still capable of securing the straps. Nevertheless, we tried cutting the straps to length and found they would not fray. The outer surface of the straps consisted of a lighter-gauge loop Velcro so not to grab on to clothing. Overall length measured 14.25 inches but could be stretched an additional 0.3 inch. The kit was closed by applying a 4-inch-by-5-inch panel of Velcro that was a separate piece and not connected to either end. Minimum interior circumference was about 14.3 inches. When allowing for 1 inch of contact between the unit and the closure panel, the maximum inner circumference measured about 17 inches.

Within the five pockets we loaded a SOFTT tourniquet with aspirin pills hidden in its folds, a half-inch thick 2.5-inch square of gauze, three nitrile gloves, a Celox-impregnated bandage with a package of nitroglycerin taped to its packaging, a RATS tourniquet, and a small serrated folding knife. Empty, the Galco unit weighed 3.6 ounces. Filled with the above, the unit weighed 13.4 ounces.

Whereas the Rescue Essentials unit consisted of pockets seated against a flat unyielding surface, the Galco kit could expand inward against the leg. But some of the pressure of the bulging pocket was dissipated because the neoprene allowed it to stretch in terms of circumference as well as spread out against the skin.

Our Team Said: The “floating” Velcro closure panel allowed the kit to more easily conform to the leg. But the Velcro straps can be frustrating, as they tend to grab on to the nearest surface and get in the way. This became critical when it was necessary to access multiple pockets. Cutting the straps to the minimal length can minimize the problem, but a loss of versatility may result. Despite these characteristics and being overpriced in our view, the Galco kit allowed us to carry a lot of gear with the weight evenly and comfortably distributed.