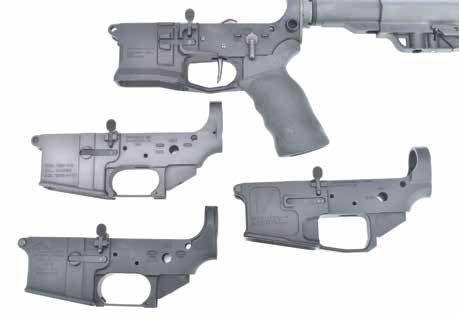 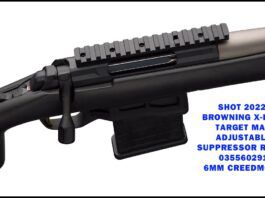 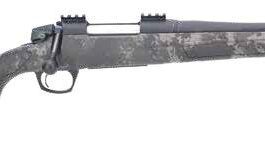 Henry Repeating Arms Rifle Held Its Own Against Winchester 9422

Lever rifles in the rimfire calibers can do many things for the avid shooter. Besides providing casual shooting fun for the lever-rifle fan, these guns can be serious hunting arms. If the nimrod has a centerfire lever gun for any serious purpose, the rimfire can provide meaningful and inexpensive practice. This practice can extend from the rifle range to the small game field, and to just about anywhere in between. In the Idaho back country, many landowners keep a .22 LR of some sort, many of the lever type, by the back door for garden or yard pests.

Our test here includes a pair of lever guns, the Winchester 9422 Walnut and the new Henry Model H001, out of Brooklyn, New York, of all plac...

Common folklore has it that the .243 was a wildcat developed out of the .308. However, because the .308 came out in 1952, only three years prior, there was precious little time for any wildcatting to have made much of an influence on factory developments. The roots for the .243 actually go back a long, long way and involve other countries besides the USA. The Germans, for example, experimented with a .24-caliber cartridge nearly i...

Bolt-action rifles are so popular that we often forget there are other types of manually-operated long guns available. One such class of firearm is the single-shot rifle. Although most shooters dislike these rifles for their lack of firepower, single shots are capable hunting arms.

Currently, there are two general types of single-shot rifles available. On the lower end of the price scale are guns, such as the Harrington & Richardson Ultra and the New England Firearms Handi-Rifle, which have break-open actions. This type of rifle has a barrel that is hinged to the frame, like that of a over/under shotgun. The other, more expensive type of single-shot rifle, such as the Browning Model 18...

Taking up the challenge of a blackpowder hunt can do far more than simply giving you additional time in the field each year. It also can provide a graduate-level course in all the hunting arts and link you to history, provided you choose a true primitive-style muzzleloader. This thinking may run counter to the market's current tastes, which seem to tilt toward in-line rifles that resemble modern bolt-action rifles. These in-line products, in our view, provide no link to history. Their scopes make it unnecessary to get really close to the game, and thus remove much of the challenge of the primitive muzzleloader hunt. As a result, modern in-line rifles are now outlawed in some states' blackpowder seasons because they don't conform to the original concept of hunting with a "primitive weapon."

Moreover, cost is another reason to go traditional. The hunter can buy a new primitive-looking weapon, install an aperture sight, and take to the woods with a thoroughly effective blackpowder rifle. Still, when you see these inexpensive muzzleloading rifles at gun shows and gun shops—with their plastic stocks, simple locks, and low price tags—you must wonder if they are worth the money.

We decided to find out, so we bought a plastic-stocked CVA (Connecticut Valley Arms, Inc.) Bobcat and tested it against a CVA Frontier, which has a maple stock and a slightly longer barrel, and a Thompson/Center Hawken, all in .50 caliber.

The business risks inherent in launching a new firearm are so sizable that many companies prefer to play it safe when it comes to new-gun production. As the auto industry knows, it's much easier and cheaper to change the sheet metal on an existing model than it is to re-engineer a product from the wheels up. Moreover, in regard to guns, even if the concept sells well and recoups its development costs, there's the additional worry that a new product has a lifetime of potential liability in front of it—such as when a customer leaves a cleaning rod in the barrel and proceeds to blow part of his face off. Thus, whipsawing caused by sales concerns, development difficulties, and the great unknown...

Shooters who have considered purchasing a semiautomatic rifle chambered for .308 (7.62 NATO) likely balk at the question of which rifle they should buy, bypassing completely the question of whether to buy such a gun. Unquestionably, self-loading .308s are coveted by nearly everybody, mainly because they can do so much. They can compete, they can plink, they can hunt, and, of course, they're made for self-defense, should such a situation arise.

Though there are many options if you care to search them out, there are basically three readily available rifle types in .308. They are the FAL, the M1A (M14 clone), and the HK-91. We did a several-years-long study of these three types, going to the...

.223 Remington Bolt-Action Packages: How Do They Rate

CZ's 527 and the Savage GXP3 packages come with on-board scopes, but are they a steal or a bad deal?

Many hunters believe that one gun is as good as another, and that any old bolt action will kill a deer. In some extreme cases this may even be true, such as hunting in heavy brush or forest, where shots will almost always be under 50 yards. But a recent test of four bolt actions suggests that not all such guns are created equal; in fact, as informed Gun Tests readers know, performance among similar, and in this case very common, products can vary widely enough to ruin a season's worth of hunting effort.

Case in point: We recently bought and shot a quartet of the most prevalent centerfire bolt guns in the field today, all of them chambered for the .30-06 Springfield. According to ammunition makers, this round outsells all other centerfires, mainly because of its long-standing performance record and versatility. .30-06 cartridges are offered in bullet weights from 125 to 220 grains, the former a top choice for medium-size game at long range, while a 220-grain bullet traveling at 2,400 fps will take just about any North American game animal.

The plinking/light-target .22 LR autoloader rifle market has long been one of the gun industry's mainstays; it seems there's an almost bottomless need for entry-level .22s that shoot well enough, function well enough, and don't cost too much. In recent years, Ruger has reportedly had the best of the segment, selling ten versions of its venerable 10/22 design, which was introduced in 1964, in the price span between $160 to $300. Likewise, at a slightly lower price point, Marlin's $100 to $160 Model 60s did almost as well, accounting for a good chunk of that firm's total business, a company source told us. But why wasn't the biggest name in the business—Remington—better represented in what was likely the most popular product segment?

Unquestionably, Remington hasn't had a hit in the autoloading .22 rifle market since the Nylon 66, introduced back when dinosaurs roamed the earth in 1959. Like the 10/22 that followed it, the 66's strengths were durability, reliability, and easy care, if not pinpoint accuracy. With those timeless attributes in mind, Remington went back to the well in 1997 and rolled out the 597-series rifles—which to our eyes were made to correct deficiencies that have gone long overlooked in the unchanged 10/22s.

We say this because of a recent four-way test we undertook to compare two basic 597 guns, the polymer-stocked 597 and wood-stocked 597 Sporter, with two of Ruger's better sellers, the polymer-stocked 10/22RP and the hardwood-stocked 10/22RB. In terms of price, weight, length, componentry, design, and options, these two lines look like twins separated at birth. It was as if Remington sales guys, a la Dilbert, asked the company's engineers to "make us a gun that looks like the 10/22, but different, and better."

Did they succeed? We think so, at least in part.

Many of us believe we can shoot tight, tight groups with our off-the-rack rifles, and we brag about how "small" we are—perhaps the only time other than when we compare cell-phone sizes that we make such a claim. But the reality is that unmodified guns we purchase over the counter rarely shoot inch-or-smaller groups at 100 yards, and those of us who take our medication regularly secretly know that.

But we've found a class of affordable factory-production guns whose accuracy out of the box would not embarrass us when chuckin' bullets at woodchucks or cutting cloverleafs on targets. A family of heavy-barrelled bolt guns, including Ruger's KM77VT MKII Target Rifle, Remington's Model 700VS Var...

Interest in the bolt-action .30-06 never seems to dim, especially when hunting season rolls around. We recently tested (May 1999) a handful of similarly configured hunting rifles that all had composite stocks and 22-inch barrels, the rifles bearing the names Savage, Winchester, Remington, Howa, and Century. The winner of the test was the inexpensive Savage M111F, $395. Because you may be considering the purchase of a new hunting rifle for the coming deer-hunting season, this month we tested two more rifles whose reputations precede them, the Beretta Mato (which means bear in the Dakota Indian dialect) and the Browning A-Bolt Composite Stalker with BOSS, both with synthetic stocks and blued barrels. These are more expensive rifles than the $395 Savage. The Browning retails for $640 and the Beretta for $1,660.

The question: Does a higher price bring improved performance or greater pride of ownership? Does it give you more of a hunting rifle that even the more budget-minded hunter simply can't overlook?

Let's take a look at each gun and find out.