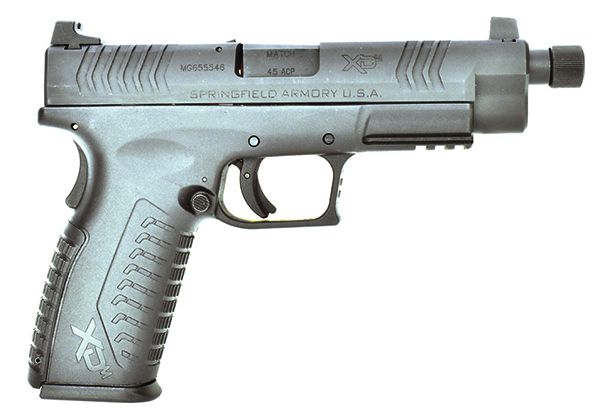 If we had a product that lent itself to further development and kept selling, we would ride that horse for all its worth. Springfield has done just that with the eXtreme Duty (XD) series. The company secured the licensing rights to the HS 2000 concept from HS Produkt in Croatia in 2002. Their expansion on this line has been constant and well received.

At about 8 inches in height and 6 inches in length, the XD-M Tactical is ever so slightly smaller than the H&K. The grip measured about 5.75 inches for the XD-M versus 5.6 inches for the H&K, but the XD-M shoehorns in three more rounds into the magazine. Total onboard capacity for the XD-M Tactical is 13+1 rounds. The model we tested had a slide length normally mated with a 4.5-inch barrel. This particular version adds about 0.75 inch more barrel to make room for threads for the suppressor. According to Springfield, pitch for those threads is 0.578×28, and a thread protector is included. The other primary alteration from the standard XD-M was the addition of the suppressor-height sights. Both front and rear sights sport white dots and are mounted in dovetails. That means it is a very sturdy mount that is easy to adjust for windage, but the only way to adjust for elevation is to change the height of the front sight. We measured front sight height at 0.360 inch — sufficient to clear most suppressors.

We may have had a 5.28-inch-long barrel, but because the forged-steel slide is the one normally used with a 4.5-inch barrel, it has a solid top strap. The sides are angled in, as we have come to expect from the XD line. Chevron-cut cocking serrations are located front and rear. There is the customary loaded-chamber indicator mounted above the breech face, along with the striker-status indicator at the rear of the slide.

The “M” in XD-M” means that it is a match version, so there are several added touches to this pistol. The ramp on the match-grade barrel has been polished to a mirror finish to help feeding. The sharp edge, frequently present, where the ramp meets the chamber has been chamfered, allowing the cartridge a more-gentle journey into the firing chamber. The pistol is also going to be more accurate when the barrel is well fitted to the slide. The HK45 uses an O-ring to tighten things up. The XD-M uses a built-up a barrel that fits the end of the slide a bit more tightly. Also, the XD-M deploys a more match quality trigger. Required compression is less and travel is much shorter. Even the rib on the inside of the slide that would contact the top cartridge in the magazine as the slide reciprocates has been polished.

The polymer frame is secured to the top end via two sets of meaty rails. The grip is textured with the older style, and we like the M2.0 style a bit better. The pistol ships in a sturdy case that includes three magazines and two additional backstraps to help fit the pistol to the shooter’s hand. As with the H&K, these can be removed by punching out a single roll pin. Try the smaller insert sometime, even if you have bigger hands. The larger insert may feel better, but we have found smaller set ups can allow better trigger control. The frame also has the almost obligatory Picatinny rail and a nicely beveled magwell. The primary controls are on the left side for right-handed shooters, but the magazine release is ambidextrous. As expected, the XD-M includes a grip safety that must be engaged before the trigger can be depressed.

Disassembling the XD-M does not require pressing the trigger, and we like that. Remove the magazine and check to make sure the pistol is unloaded. Check again. Lock the slide to the rear; the grip safety must be depressed for that to happen. Rotate the takedown lever 90 degrees clockwise and slide off the top end. Lift out the spring and guide-rod assembly. Remember to remove the thread protector first, so the barrel can be lifted out of the slide. Reassemble in reverse order. Be careful with the recoil spring — it has to be lined up correctly with the guide rod and is under a good bit of pressure. Don’t forget the thread protector.

The XD-M tied with the HK for the accuracy title — to the hundredth of an inch. We had anticipated that the grip texture might be a bit too smooth, but that did not turn out to be the case. We were able to control the XD-M through rapid fire without it shifting in our hands. The sights shot very closely to point of aim straight out of the box. It showed a preference for heavier ammunition, doing best with the 230-grain Remington Golden Saber and Federal HST offerings. The magazines really did hold and feed all 13 rounds of everything tested.

Our Team Said: The XD-M tied for the top score in accuracy, had the greatest magazine capacity without requiring additional size, and, if we hadn’t short-stroked on a single trigger press, it would have won both speed drills. It is Our Pick.

All our range shooting was done from a well-sandbagged Caldwell Pistol Rest and a mini DRC Fortune Cookie bag from Wiebad.com. We shot each pistol for accuracy using five-shot groups at 15 yards. Muzzle velocity was determined using a LabRadar chronograph ($559 at BuyMyLabradar.com). Test location was American Shooting Centers (AMShootCenters.com) in Houston.