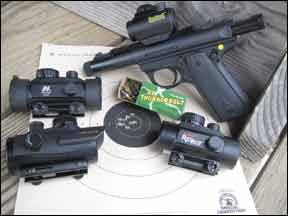 Back in 1975, Aimpoint offered the first commercial red-dot sight. Those initial sights were heavy and good luck trying to find a replacement battery. Today’s red-dot units are lighter and use batteries sold at convenience stores and gas stations, and as the weight of the sight decreased, so too did the price. One of our testers cringes at the price he paid for a used Aimpoint in the ‘80s. Today, he could purchase eight $50 modern red dots for the same money.

We wondered, however, if the sub-$50 red dots really did keep their utility as they got more affordable. To find out, we tested three affordable sights, the Tasco BKRD30 ($50), BSA Model RD30 ($40), and NcStar DBB130 ($40). To give us some contrast, we also tested a potential ringer, the Bushnell TRS-25, which costs about $100. Would the extra cost prove to be a good investment, or would the sights that cost half deliver similar performance to the Bushnell?
Before we began range work with the red dots, they were shock-tested by dropping them on a wood floor from a height of 4 feet. The jolt had no effect on the sights; dots remained illuminated and the knobs still turned.

Next, the dots were activated with the turret covers left on and frozen at -4 F then soaked in hot water. Some of the instruction manuals stated the battery and turrets caps need to be secured when using the sights in extreme conditions. We abided and left the turret caps on. All had some type of pliable gasket on the turrets to seal out dust and moisture. So, too, did the battery compartments. There were no hiccups from the cold. In the water, all the sights released a few air bubbles form the rheostat knob, but again there were no malfunctions.

We used a Ruger 22/45 for range testing. Shooting was from a rest using a two-hand hold. We fired 40-grain Remington Thunderbolt cartridges with a velocity of 1255 fps at NRA 50-foot timed- and rapid-fire pistol targets.

All the sights had Picatinny rail or Weaver-style bases for mounting. The NcStar and BSA both had one clamp that was adjustable. The Tasco’s mounts were fixed. The Bushnell had only one mounting clamp. All the clamps could be tightened with a flat screwdriver or coin. Only the Bushnell required a hex wrench, which was supplied with the sight. These sights are made to be zeroed and left alone, but we cranked the windage and elevation around the horn, while noting the number of clicks to see if they returned to zero. None of them did.

We also looked at the ability to pick up the dot with both eyes opened, consistency shot after shot, and ease of use. Here’s what we thought about each unit.

BSA Model RD30, $40
The BSA RD30 with its larger objective, like the NcStar and Tasco, was easy to use with both eyes open. Testers felt the BSA and Tasco tied for ease of use and lightweight. Returning the dot to zero on all the sights was not the most accurate experience, but as stated previously, these sights are made to be zeroed and left alone.

All the sights used a knob to activate and adjust the red dots’ intensity. The BSA, Tasco, and NcStar located the knob on top of the sight; the Bushnell had its knob at a 45-degree angle between the top and right side. The knobs took effort to turn, with the BSA knob rotating the easiest. The Bushnell required the most effort.

Our Team Said: The BSA pleased all our testers who thought it gave the pistol good balance and with fast follow up ability.

NcStar DBB130, $40
The NcStar was the heaviest sight tested. The precision shooter among the testers liked it because it helped steady the pistol from the 22 LR recoil. The clear flip-up covers looked like they would scratch easily, and most testers felt the covers would keep out dust, dirt, and other assorted crud. Most testers preferred to use the sight with the clear lens covers flipped up.

Red dots are manufactured with a coating on the lens that creates a green tint when viewing. The coating helps reflect the red dot within the sight body. The green tint was slightly more pronounced on the NcStar. Also, a slight blueish ring can be seen around the edge of the NCStar’s lens. We felt that neither of these coatings affected the use of the sight, since the green tint was subtle. The sight is also not designed for observation like spotting scopes and binoculars nor like magnifying rifle scopes.

The sights had 11 intensity levels, except for the NcStar’s which had seven. When we shot the sights, we dialed them in at level 7 for consistency, and when tested in bright sunlight, all of the dots were clear points of red that were easy to place on target. In the dark, the dots seemed a bit fuzzier. At the highest setting, all the sights produced a objective signature that an observer could see from downrange.

Our Team Said: Testers dinged the NcStar for its weight, especially when mounted on a pistol. They thought it would be better suited for use on a rimfire rifle or on a shotgun.

Tasco BKRD30, $50
The Tasco definitely made shooters happy. Its controls were not too difficult or easy to turn, and the larger objective made two-eye aiming simple. Red dots tout their sturdiness for use on rifles, shotguns, and magnum revolvers. The Tasco was the only sight that would fit on 22 LR rifles and airguns due to its having a 3/8-inch base clamp.

The knobs housed the units’ batteries. With the Tasco and Bushnell, you could use a coin to tighten the cover, and that was a good practice with the Bushnell, since some testers accidentally loosened the battery cover when turning and adjusting the dot. The NcStar’s battery cover had a ridge edge, and it loosened as some shooters rotated the knob.

Our Team Said: Testers liked the Tasco and ultimately gave the sight a top rating.

Bushnell TRS-25, $100
The ringer in the test was tiny in size and weight compared the other red dots. Some testers felt the smaller objective and smaller dot was slightly harder to use. Most agreed younger or less-experienced shooters would choose a sight with the larger objective diameter and with the larger 5-MOA dot. Some testers were willing to pay double for the compact size. They liked that it only used one mounting clamp since it was easier to mount and afforded more mounting options. The brightest of the sights was the Bushnell, followed by the Tasco, our shooters said. The BSA and NcStar were tied at a step behind. We tried to coax parallax from all four sights, but could not. Moving our head left/right and up/down, the dots stayed on target.

Our Team Said: If small size matters, then the Bushnell would win hands down. However, the sight’s higher price caused our testers to grade the Bushnell down a notch. 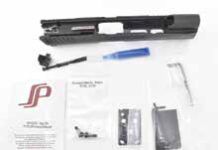 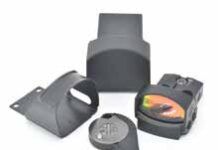